This section describes the different types of interfaces supported by the switch. The rest of the chapter describes configuration procedures for physical interface characteristics.

A VLAN is a switched network that is logically segmented by function, team, or application, without regard to the physical location of the users. Packets received on a port are forwarded only to ports that belong to the same VLAN as the receiving port. Network devices in different VLANs cannot communicate with one another without a Layer 3 device to route traffic between the VLANs.

VLAN partitions provide hard firewalls for traffic in the VLAN, and each VLAN has its own MAC address table. A VLAN comes into existence when a local port is configured to be associated with the VLAN, when the VLAN Trunking Protocol (VTP) learns of its existence from a neighbor on a trunk, or when a user creates a VLAN. VLANs can be formed with ports across the stack.

Add ports to a VLAN by using the switchport interface configuration commands:

Switch ports are Layer 2-only interfaces associated with a physical port. Switch ports belong to one or more VLANs. A switch port can be an access port or a trunk port. You can configure a port as an access port or trunk port or let the Dynamic Trunking Protocol (DTP) operate on a per-port basis to set the switchport mode by negotiating with the port on the other end of the link. switch ports are used for managing the physical interface and associated Layer 2 protocols and do not handle routing or bridging.

An access port belongs to and carries the traffic of only one VLAN (unless it is configured as a voice VLAN port). Traffic is received and sent in native formats with no VLAN tagging. Traffic arriving on an access port is assumed to belong to the VLAN assigned to the port. If an access port receives a tagged packet (Inter-Switch Link [ISL] or IEEE 802.1Q tagged), the packet is dropped, and the source address is not learned.

You can also configure an access port with an attached Cisco IP Phone to use one VLAN for voice traffic and another VLAN for data traffic from a device attached to the phone.

A trunk port carries the traffic of multiple VLANs and by default is a member of all VLANs in the VLAN database. These trunk port types are supported:

Tunnel ports cannot be trunk ports or access ports and must belong to a VLAN unique to each customer.

The number of routed ports that you can configure is not limited by software. However, the interrelationship between this number and the number of other features being configured might impact CPU performance because of hardware limitations.

A switch virtual interface (SVI) represents a VLAN of switch ports as one interface to the routing or bridging function in the system. You can associate only one SVI with a VLAN. You configure an SVI for a VLAN only to route between VLANs or to provide IP host connectivity to the switch. By default, an SVI is created for the default VLAN (VLAN 1) to permit remote switch administration. Additional SVIs must be explicitly configured.

SVIs provide IP host connectivity only to the system. SVIs are created the first time that you enter the vlan interface configuration command for a VLAN interface. The VLAN corresponds to the VLAN tag associated with data frames on an ISL or IEEE 802.1Q encapsulated trunk or the VLAN ID configured for an access port. Configure a VLAN interface for each VLAN for which you want to route traffic, and assign it an IP address.

Although the switch stack or switch supports a total of 1005 VLANs and SVIs, the interrelationship between the number of SVIs and routed ports and the number of other features being configured might impact CPU performance because of hardware limitations.

When you create an SVI, it does not become active until it is associated with a physical port.

The line state of an SVI with multiple ports on a VLAN is in the up state when it meets these conditions:

A PoE-capable switch port automatically supplies power to one of these connected devices if the switch senses that there is no power on the circuit:

After the switch detects a powered device, the switch determines the device power requirements and then grants or denies power to the device. The switch can also sense the real-time power consumption of the device by monitoring and policing the power usage.

Theswitch has three USB ports on the front panel — a USB mini-Type B console port and two USB Type A ports.

The switch has the following console ports:

Console output appears on devices connected to both ports, but console input is active on only one port at a time. By default, the USB connector takes precedence over the RJ-45 connector.

At software startup, a log shows whether the USB or the RJ-45 console is active. Each switch in a stack issues this log. Every switch always first displays the RJ-45 media type.

When the USB cable is removed or the PC de-activates the USB connection, the hardware automatically changes to the RJ-45 console interface:

The USB Type A ports provide access to external USB flash devices, also known as thumb drives or USB keys. The switch supports Cisco 64 MB, 256 MB, 512 MB, 1 GB, 4 GB, and 8 GB flash drives. You can use standard Cisco IOS command- line interface (CLI) commands to read, write, erase, and copy to or from the flash device. You can also configure the switch to boot from the USB flash drive.

For information about configuring the switch to boot from a USB flash drive, refer to the Catalyst 2960-XR Switch System Management Configuration Guide.

For information about reading, writing, erasing, and copying files to or from the flash device, refer to the Catalyst 2960-XR Switch Managing Cisco IOS Image Files Configuration Guide.

Devices within a single VLAN can communicate directly through any switch. Ports in different VLANs cannot exchange data without going through a routing device. With a standard Layer 2 switch, ports in different VLANs have to exchange information through a router. By using the switch with routing enabled, when you configure both VLAN 20 and VLAN 30 with an SVI to which an IP address is assigned, packets can be sent from Host A to Host B directly through the switch with no need for an external router.

Figure 1. Connecting VLANs with the Switch 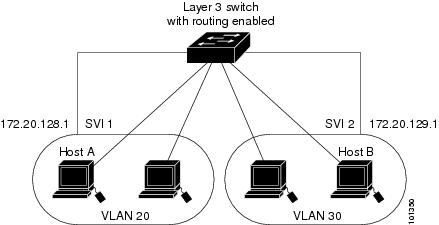 The IP Lite imageIP Lite feature set supports static routing and RIP. The IP Base image supports only static routing. The routing function can be enabled on all SVIs and routed ports. The switch routes only IP traffic. When IP routing protocol parameters and address configuration are added to an SVI or routed port, any IP traffic received from these ports is routed.

The switch supports these interface types:

You can also configure a range of interfaces.

These are examples of how to identify interfaces on a stacking-capable switch:

When configuring an interface speed and duplex mode, note these guidelines:

Flow control enables connected Ethernet ports to control traffic rates during congestion by allowing congested nodes to pause link operation at the other end. If one port experiences congestion and cannot receive any more traffic, it notifies the other port by sending a pause frame to stop sending until the condition clears. Upon receipt of a pause frame, the sending device stops sending any data packets, which prevents any loss of data packets during the congestion period.

You use the flowcontrol interface configuration command to set the interface’s ability to receive pause frames to on, off, or desired. The default state is off.

These rules apply to flow control settings on the device:

The switch supports these types of Layer 3 interfaces:

A Layer 3 switch can have an IP address assigned to each routed port and SVI.

How to Configure Interface Characteristics

These general instructions apply to all interface configuration processes.

Adding a Description for an Interface

Configuring a Range of Interfaces

Shutting Down and Restarting the Interface

Shutting down an interface disables all functions on the specified interface and marks the interface as unavailable on all monitoring command displays. This information is communicated to other network servers through all dynamic routing protocols. The interface is not mentioned in any routing updates.

Follow these steps to set the console media type to RJ-45. If you configure the console as RJ-45, USB console operation is disabled, and input comes only through the RJ-45 connector.

This configuration applies to all switches in a stack.

Clearing and Resetting Interfaces and Counters

Adding a Description to an Interface: Example

Configuring a Range of Interfaces: Examples

This example shows how to use the interface range global configuration command to set the speed to 100 Mb/s on ports 1 to 4 on switch 1:

This example shows how to define an interface-range named enet_list to include ports 1 and 2 on switch 1 and to verify the macro configuration:

This example shows how to create a multiple-interface macro named macro1:

This example shows how to delete the interface-range macro enet_list and to verify that it was deleted.

This configuration terminates any active USB console media type in the stack. A log shows that this termination has occurred. This example shows that the console on switch 1 reverted to RJ-45.

This example reverses the previous configuration and immediately activates any USB console that is connected.

This example configures the inactivity timeout to 30 minutes:

To disable the configuration, use these commands:

If there is no (input) activity on a USB console port for the configured number of minutes, the inactivity timeout setting applies to the RJ-45 port, and a log shows this occurrence:

At this point, the only way to reactivate the USB console port is to disconnect and reconnect the cable.

When the USB cable on the switch has been disconnected and reconnected, a log similar to this appears: