The Cisco Nexus 1000V is a virtual access software switch for vNetwork Distributed Switches that work with VMware vSphere 4.0. It has the following components:

The Virtual Supervisor Module (VSM)— the control plane of the switch and a virtual machine that runs the NX-OS operating system.

The Virtual Ethernet Module (VEM) —a virtual line card embedded in each VMware vSphere (ESX) host that is a part of the distributed switch. The VEM is partly inside the kernel of the hypervisor and partly in a user world process, called the VEM Agent. 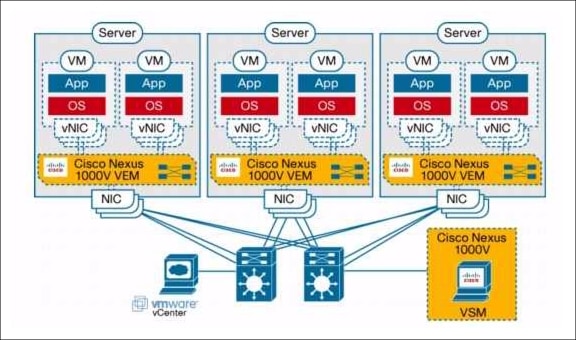 The Control VLAN and the Packet VLAN are used for communication between the VSM and the VEMs within a switch domain: .

Cisco recommends that the Control VLAN and Packet VLAN be separate VLANs; and that they also be on separate VLANs from those that carry data.

If you are installing more than one VSM within the same VMware vCenter Server, Cisco recommends the use of distinct Control/Packet VLAN pairs for each domain. If you must use the same VLAN pair for multiple domains, you must ensure that their domain identifiers are different.

A port profile is a set of interface configuration commands that can be dynamically applied to either the physical (uplink) or virtual interfaces. A port profile can define a set of attributes including the following:

When a server administrator adds a host to the DVS, the VEM in that host needs to be able to configure the VSM. Since the ports and VLANs for this communication are not yet in place, System Port Profiles and System VLANs are configured to meet this need. VSM sends minimal early configuration to the vCenter Server, which then propagates it to the VEM when the host is added to the DVS.

A system port profile is designed to establish and protect vCenter Server connectivity. It can carry the following VLANs:

System VLANs or VNICs used when bringing up the ports before communication is established between the VSM and VEM.

The uplink that carries the control VLAN

Vmotion of the VSM VM is not supported. In particular, DRS should not be enabled for the VSM VM. Vmotion and DRS are supported for other VMs connected to the Cisco Nexus 1000V.

The snapshot of the VSM VM will not contain the configuration changes made since the snapshot was taken. So, restoring the VSM VM from a snapshot may require some care.

For information about the CLI, see the "Understanding the CLI" section on page 2-1.