This chapter describes underlying concepts about virtual routers and on how virtual routing behaves within the Firepower Threat Defense.

You can create multiple virtual routers to maintain separate routing tables for groups of interfaces. Because each virtual router has its own routing table, you can provide clean separation in the traffic flowing through the device.

Thus, you can provide support to two or more distinct customers over a common set of networking equipment. You can also use virtual routers to provide more separation for elements of your own network, for example, by isolating a development network from your general purpose corporate network.

Virtual routers implement the “light” version of Virtual Routing and Forwarding, or VRF-Lite, which does not support Multiprotocol Extensions for BGP (MBGP).

You can configure the following features on the global virtual router only:

DHCP server auto-configuration uses WINS/DNS server that is learned from an interface. This interface can only be a global virtual router interface.

You can configure the following features separately for each user-defined virtual router:

Configuring Policies to be Virtual-Router-Aware

For example, if you write an access control rule that applies to “any” source or destination security zone, then the rule will apply to all interfaces across all virtual routers. This might in fact be exactly what you want. For example, all of your customers might want to block access to the same list of objectionable URL categories.

By using security zones whose memberships are constrained to the interfaces assigned to a single virtual router, you can write virtual-router-aware rules in the following policies:

You can configure static routes to route traffic between virtual routers.

Though NAT rule leaks traffic from one virtual router to another, to ensure correct routing, we recommend that you configure a static route leak between these virtual routers for the translated traffic. Without the route leak, sometimes the rule may not match the traffic you expect it to match, and the translation may not be applied.

Virtual routing does not support a cascading or chain of route leaks. For example, assume that your FTD has VR1, VR2, and VR3 virtual routers; VR3 is directly connected to a network - 10.1.1.0/24. Now, assume you configure a route leak in VR1 for network 10.1.1.0/24 through interface in VR2 and in VR2 define a route leak for 10.1.1.0/24 through VR3. This chain of route leaks will not allow traffic to hop from VR1 to VR2 and then exit from VR3. In case of route leaks, the route lookups first determine egress interface from input Virtual Router’s routing table and then looks at the output of Virtual Router’s routing table for next hop lookup. From both the lookups, egress interface should match. In our example, the egress interfaces will not be the same and hence the traffic does not pass through.

Virtual router creates multiple instances of routing tables that are independent, thereby, the same or overlapping IP addresses can be used without conflicts. FTD allows the same network to be part of two or more virtual routers. This involves multiple policies to be applied at the interface or at the virtual router level.

When using an overlapping IP address in multiple virtual routers, to ensure proper application of the policy, you have to modify policies or rules for some of the features. Such features require you to use more specific interface either by splitting existing security zone or using new interface group as the need be.

Following features need modification for its proper functioning with an overlapping IP address:

For the following features, you need to apply rules on specific interfaces to ensure that different policies are applied on overlapping IP segments:

Requirements and Prerequisites for Virtual Routers

Guidelines and Limitations for Virtual Routers

Virtual routers are supported on routed firewall mode only.

You can configure virtual routers in the routing page of a supported device:

For devices using virtual routing, the left pane of the Routing page displays the following:

) the details of a global virtual router.

You can modify the description and other routing policies of a virtual router.

How to Route to a Distant Server through Virtual Routers

How to Provide Internet Access with Overlapping Address Spaces

For example, interfaces vr1-inside and vr2-inside on FTD is defined to use the IP address 192.168.1.1/24, managing endpoints on their segment in the 192.168.1.0/24 network. To allow Internet access from two virtual routers that use the same address space, you need to apply NAT rules separately to the interfaces within each virtual router, ideally using separate NAT or PAT pools. You could use PAT to translate the source addresses in VR1 to 10.100.10.1, and for those in VR2, to 10.100.10.2. The following illustration shows this setup, where the Internet-facing outside interface is part of the global router. You must define the NAT/PAT rules with the source interface (vr1-inside and vr2-inside) explicitly selected—using “any” as the source interface makes it impossible for the system to identify the correct source because the same IP address could exist on two different interfaces.

On virtual routing-enabled devices, RA VPN is supported only on global virtual router interfaces. This example provides the procedure that allows your AnyConnect client user to connect to user-defined virtual router networks.

In the following example, the RA VPN (AnyConnect client) user connects to the outside interface of FTD at 172.16.3.1, and is given an IP address within the pool of 192.168.80.0/24. The user can access the inside network of only the global virtual router. To allow traffic flow through the network of the user-defined virtual router VR1, namely 192.168.1.0/24, leak the route by configuring the static routes on global and VR1.

This example assumes that you have already configured the site-to-site VPN between the 192.168.2.0/24 local network and the 172.16.20.0/24 external network, defined the virtual routers, and configured and assigned the interfaces to the appropriate virtual routers.

You can configure hosts on the virtual routers that have same network address. If the hosts want to communicate, you can configure twice NAT. This example provides the procedure to configure the NAT rules to manage the overlapping network host.

This example assumes that you have already configured:

You can deploy single FTD between multiple overlapping networks transparently and/or deploy the firewall between the hosts of same network. To achieve this deployment, configure BVI per virtual router. The procedure to configure the BVIs in virtual router is explained here. 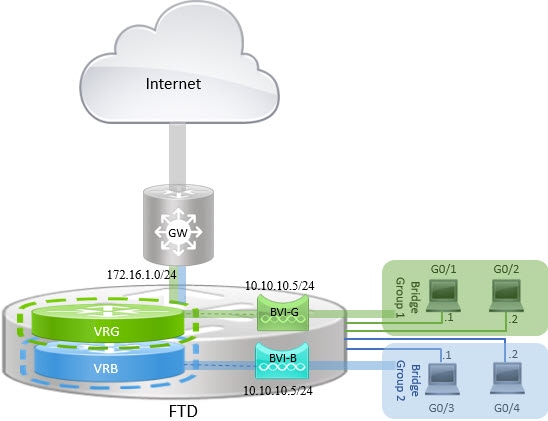 How to Configure User Authentication with Overlapping Networks

In virtual routing, you can configure multiple virtual routers with overlapping IP and overlapping users. In the example, VRG, and VRB are the virtual routers with overlapping IP - 192.168.1.1/24. The users on two different domains are also on overlapping network IP 192.168.1.20. For VRG and VRB users to access the shared server 172.16.10.X, leak routes to the global virtual router. Use source NAT to handle the overlapping IP. For controlling the access from VRG and VRB users, you must set user authentication in FMC. FMC uses realms, Active Directories, Identity source, and Identity rules and policies for authenticating user identity. Because FTD does not have direct role in authenticating users, user access is managed only through the access control policy. For controlling traffic from the overlapping users, use Identity policy and rules to create access control policy. 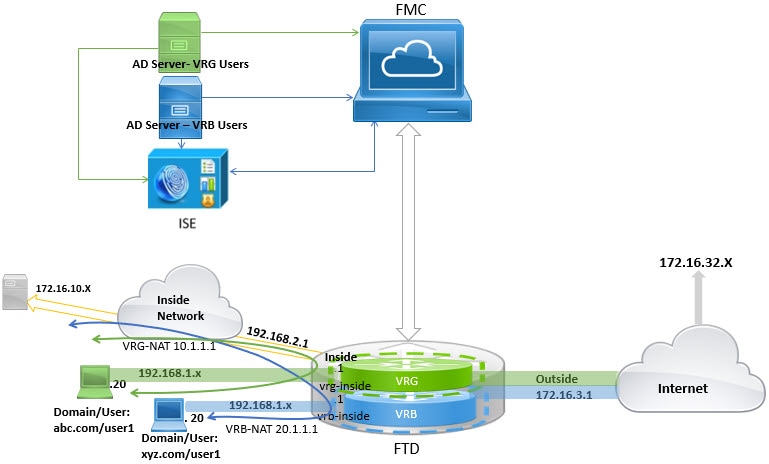 This example assumes that you have: