This chapter describes how to control network access through the ASA using access rules and includes the following sections:

For other traffic, you need to use either an extended access rule (IPv4 and IPv6) or an EtherType rule (non-IPv4/IPv6).

Using Access Rules and EtherType Rules on the Same Interface

You can apply one access rule and one EtherType rule to each direction of an interface.

Access lists have an implicit deny at the end of the list, so unless you explicitly permit it, traffic cannot pass. For example, if you want to allow all users to access a network through the ASA except for particular addresses, then you need to deny the particular addresses and then permit all others. 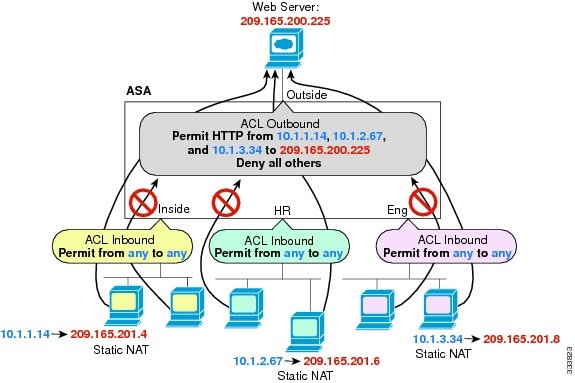 This section describes information about extended access rules and includes the following topics:

For connectionless protocols such as ICMP, however, the ASA establishes unidirectional sessions, so you either need access rules to allow ICMP in both directions (by applying access lists to the source and destination interfaces), or you need to enable the ICMP inspection engine. The ICMP inspection engine treats ICMP sessions as bidirectional connections. To control ping, specify echo-reply (0) (ASA to host) or echo (8) (host to ASA).

Because these special types of traffic are connectionless, you need to apply an extended access list to both interfaces, so returning traffic is allowed through.

Table 32-1 lists common traffic types that you can allow through the transparent firewall.

This section describes EtherType rules and includes the following topics:

To apply an access rule, perform the following steps.

Table 32-2 lists each feature change and the platform release in which it was implemented.