When you use TCP SYN cookie protection to protect servers from SYN attacks, you must set the embryonic connection limit lower than the TCP SYN backlog queue on the server that you want to protect. Otherwise, valid clients can nolonger access the server during a SYN attack.

By default, all traffic that goes through the ASA is inspected using the Adaptive Security Algorithm and is either allowed through or dropped based on the security policy. The ASA maximizes the firewall performance by checking the state of each packet (is this a new connection or an established connection?) and assigning it to either the session management path (a new connection SYN packet), the fast path (an established connection), or the control plane path (advanced inspection). See the “Stateful Inspection Overview” section for more detailed information about the stateful firewall.

For example, a new connection goes to ASA 1. The SYN packet goes through the session management path, and an entry for the connection is added to the fast path table. If subsequent packets of this connection go through ASA 1, then the packets will match the entry in the fast path, and are passed through. But if subsequent packets go to ASA 2, where there was not a SYN packet that went through the session management path, then there is no entry in the fast path for the connection, and the packets are dropped. Figure 53-1 shows an asymmetric routing example where the outbound traffic goes through a different ASA than the inbound traffic: 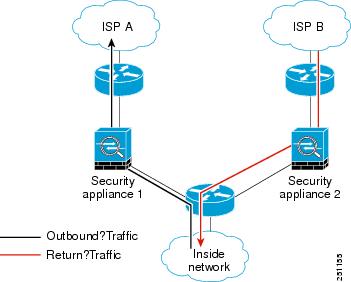 This section includes the following guidelines and limitations:

For TCP normalization customization, create a TCP map according to the “Customizing the TCP Normalizer with a TCP Map” section.

Configure connection settings according to the “Configuring Connection Settings” section.

To specify the TCP normalization criteria that you want to look for, create a TCP map by entering the following command:

(Optional) Configure the TCP map criteria by entering one or more of the following commands (see Table 53-1 ). If you want to customize some settings, then the defaults are used for any commands you do not enter.

Table 53-2 lists each feature change and the platform release in which it was implemented.