To determine the subnet mask based on how many hosts you want, see Table B-1 .

This section describes the IPv6 address format, the types, and prefixes. For information about configuring the ASA to use IPv6, see the “Configuring IPv6 Addressing” section 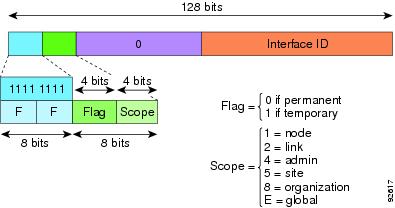 The IPv6 prefix identifies the type of IPv6 address. Table B-5 shows the prefixes for each IPv6 address type.

Table B-6 lists the protocol literal values and port numbers; either can be entered in ASA commands.

Table B-7 lists the literal values and port numbers; either can be entered in ASA commands. See the following caveats:

Table B-8 lists the protocols, TCP ports, and UDP ports that the ASA may open to process traffic destined to the ASA. Unless you enable the features and services listed in Table B-8 , the ASA does not open any local protocols or any TCP or UDP ports. You must configure a feature or service for the ASA to open the default listening protocol or port. In many cases you can configure ports other than the default port when you enable a feature or service.

Table B-9 lists the ICMP type numbers and names that you can enter in ASA commands.