This document contains the following sections:

Crosswork Network Controller enables provisioning of segment routing (SR) policies for services with explicit SLAs by specifying optimization objectives (latency/IGP/hopcount/TE metric minimization) and constraints (affinities, disjoint paths, bandwidth). A segment routing policy path is expressed as a list of segments that specifies the path, called a segment ID (SID) list. Each segment is an end-to-end path from the source to the destination, and instructs the routers in the network to follow the specified path instead of the shortest path calculated by the IGP. If a packet is steered into an SR policy, the SID list is pushed on the packet by the head-end. The rest of the network executes the instructions embedded in the SID list.

SR policies and Layer 3 links configured in the network are discovered by the SR-PCE component. Discovered SR policies can be visualized and monitored in the Optimization Engine area of Crosswork Network Controller.

SR policies can be provisioned in the Provisioning area of the Crosswork Network Controller UI. Provisioning is executed by the underlying NSO component.

The following diagram illustrates how the Crosswork Network Controller components work together to enable provisioning and visualization of SR policies.

Where to Find SR Policies in the UI

To see a table of discovered SR policies: From the main menu, go to Optimization Engine > Traffic Engineering. You can select SR policies in the table to visualize them on the topology map and to drill down to additional details. See Get More Information About an SR Policy.

To see a table of provisioned SR policies: From the main menu, go to Active Topology > Active Topology. You can select SR policies in the table to visualize them on the topology map and you can drill down to additional details.

To view a list of existing provisioned SR policies and to create/edit/delete SR policies: From the main menu, go to Provisioning > Provisioning. Under Services/Policies, select SR-TE > Policy or SR-TE > ODN Template. The table is filtered to show policies of the selected type. The Actions column provides access to all the available actions for the selected policy, including:

Resource Reservation Protocol (RSVP) is a protocol that you are most likely familiar with. It is a signaling protocol that enables systems to request resource reservations from the network. RSVP processes protocol messages from other systems, processes resource requests from local clients, and generates protocol messages. As a result, resources are reserved for data flows on behalf of local and remote clients. RSVP creates, maintains, and deletes these resource reservations. This section focuses on a high-level overview of Segment Routing (SR) which is gaining popularity in the networking routing area.

Segment routing is a method of forwarding packets on the network based on the source routing paradigm. The source chooses a path and encodes it in the packet header as an ordered list of segments. Segments are an identifier for any type of instruction. For example, topology segments identify the next hop toward a destination. Each segment is identified by the segment ID (SID) consisting of a flat unsigned 32-bit integer.

By combining prefix (node) and adjacency segment IDs in an ordered list, any path within a network can be constructed. At each hop, the top segment is used to identify the next hop. Segments are stacked in order at the top of the packet header. When the top segment contains the identity of another node, the receiving node uses equal cost multipaths (ECMP) to move the packet to the next hop. When the identity is that of the receiving node, the node pops the top segment and performs the task required by the next segment.

Segment routing for traffic engineering takes place through a tunnel between a source and destination pair. Segment routing for traffic engineering uses the concept of source routing, where the source calculates the path and encodes it in the packet header as a segment. Each segment is an end-to-end path from the source to the destination, and instructs the routers in the provider core network to follow the specified path instead of the shortest path calculated by the IGP. The destination is unaware of the presence of the tunnel.

Segment routing for traffic engineering uses a “policy” to steer traffic through the network. An SR policy path is expressed as a list of segments that specifies the path, called a segment ID (SID) list. Each segment is an end-to-end path from the source to the destination, and instructs the routers in the network to follow the specified path instead of the shortest path calculated by the IGP. If a packet is steered into an SR policy, the SID list is pushed on the packet by the head-end. The rest of the network executes the instructions embedded in the SID list.

There are two types of SR policies: dynamic and explicit.

A dynamic path is based on an optimization objective and a set of constraints. The head-end computes a solution, resulting in a SID list or a set of SID lists. When the topology changes, a new path is computed. If the head-end does not have enough information about the topology, the head-end might delegate the computation to a path computation engine (PCE).

When you configure an explicit policy, you specify an explicit path which consists of a list of prefix or adjacency SIDs, each representing a node or link along on the path.

Crosswork Network Controller uses the disjoint policy to compute two lists of segments that steer traffic from two source nodes to two destination nodes along disjoint paths. The disjoint paths can originate from the same head-end or different head-ends. Disjoint level refers to the type of resources that should not be shared by the two computed paths. The following disjoint path computations are supported:

Crosswork Network Controller provides a real-time graphical, topological map view of the devices and links in your network and allows you to visualize SR tunnels as an overlay on the map for easy monitoring and management.

The following topics provide information about visualization of the different types of SR policies in Crosswork Network Controller:

This topic describes the Optimization Engine topology map in which SR polices discovered from the network by SR-PCE can be visualized. Visualization of SR policies created and provisioned from the Provisioning area of Crosswork Network Controller, i.e., through the NSO component, begins in the Active Topology area. From there you can drill down to details and visualization of participating SR polices. The basic functionality of the maps in both areas is the same. The overlays of SR policies in the two maps show different levels of detail.

Follow the steps in this example to quickly familiarize yourself with a number of TE tunnel visualization features that are available from the topology map.

In this example, we are using the following geographical map with devices and links that have SR policies configured. SR policies are not yet highlighted in the map.

The SR Policy Details page is displayed in the side panel (see Get More Information About an SR Policy). Note that only the selected policy is now highlighted on the topology map.

If you encounter topology issues, such as topology components not rendering as expected or component data not displaying on the map, Cisco recommends the following:

The Active Topology area contains a topology map and a list of VPN services and SR policies that were created using the Crosswork Network Controller GUI (Provisioning area) or API, and provisioned by the underlying NSO component.

The procedure below describes visualization of an explicit SR policy.

Crosswork Network Controller provides automated SR policy based tactical traffic engineering capability to detect and mitigate congestion in your network, via its Bandwidth Optimization function pack (BWOpt). BWOpt uses the threshold interface utilization requested by the user and compares it to the actual utilization in the network. When interface congestion is detected by BWOpt, it attempts to shift traffic away from hot spots through the use of tactical traffic engineered SR policies which are deployed to the network via SR-PCE. As network conditions (topology and/or traffic) change over time, BWOpt will continue to monitor interface utilization and manage any tactical SR policies deployed, including changing their paths and/or removing them from the network when deemed no longer necessary.
In this example, we have enabled bandwidth optimization functionality and configured the following options in BWOpt (Optimization Engine > Function Packs):
Below is a network with various devices and links that span the United States, displayed in the topology map in Optimization Engine > Function Packs. Note that there are no SR policies listed in the SR Policies window.
Suppose the link between P3_NCS5501 and P4_NCS5501 goes down. Traffic moves towards other links causing congestion and exceeds the configured utilization threshold.
Crosswork Network Controller recognizes the congestion and immediately calculates and deploys a tactical SR policy. This new tactical SR policy is listed in the SR Policies window.

Crosswork Network Controller continually monitors the network. When the links between P3_NCS5501 and P4_NCS5501 are back up, Crosswork Network Controller will detect that the congestion (based on the defined criteria) has been mitigated. When the congestion falls under the set utilization threshold minus the utilization hold margin, the tactical SR policy is automatically removed from the network.

Important Notes and Limitations for BWOpt

Consider the following notes and limitations when using BWOpt:

For provisioned SR policies listed in the Active Topology area:

For discovered SR policies listed in the Optimization Engine area:

(under the Actions column). You may need to expand the SR Policies table to view the Actions column. The SR Policy Details window appears. It provides more detailed information about the policy and its associated paths. See the table below for field descriptions. 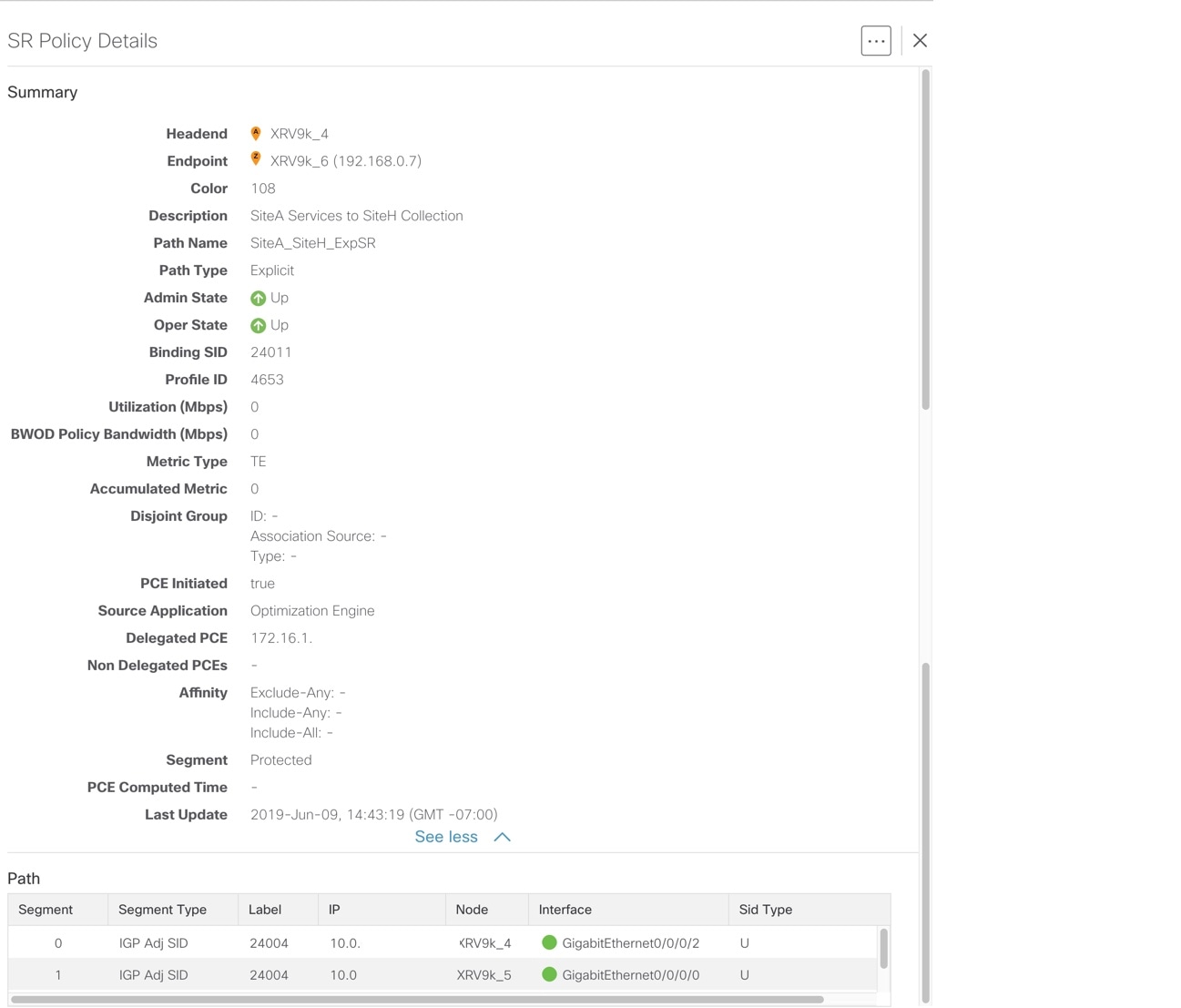 To access the Provisioning area of the UI and start creating SR policies:

A SID list is a list of prefix or adjacency Segment IDs, each representing a node or link along the path. Create one or more SID lists to be referenced when creating explicit SR policies. See Create Explicit Path SR Policies.

Explicit SR policies use a fixed path consisting of a list of prefix or adjacency Segment IDs (SID list), each representing a node or link along on the path.

Make sure that you have created the SID lists to be referenced in the SR policy. See Create a SID List.

Dynamic path SR policies consist of optimization objectives and constraints that allow the head-end router to compute a SID-list that expresses the shortest dynamic path according to the selected metric type.

A BWoD SR policy is a dynamic path steering policy that finds the optimal path when there is a specific bandwidth requirement. It uses a bandwidth-aware Path Computation Element (PCE) to derive SR policy paths with requested bandwidth when available. Computed paths are deployed to the network through SR-PCE. Link utilization is continuously monitored to ensure no congestion occurs along the path. If conditions in the network change, causing link utilization to exceed the congestion threshold set by the user, the policy path is automatically reoptimized.

Segment Routing On-Demand Next Hop (ODN) allows a service head-end router to automatically instantiate an SR policy to a BGP next-hop when required (on-demand). The headend is configured with an ODN template for a specific color that provides the device with the steps to follow if a route with that color appears, for example, a Layer 3 VPN route.

To create an ODN template: