Configuration of MAC-Based Groups to VLAN on 300 Series Switches

Configuration of MAC-Based Groups to VLAN on 300 Series Switches

A Media Access Control address (MAC address) is a unique identifier given to each network interface.  Packets (i.e. messages from a device) can be placed in a VLAN group by their source MAC address.  The information in a VLAN group is then sent to a designated VLAN.  The 300 Series Managed Switches allow you to define several MAC-based VLAN groups.  Once created, these VLAN groups can be assigned to specific ports/LAGs on the switch and forwarded to specific VLANs.

The objective of this document is to show you how to create MAC-based VLAN groups and map them to a specific interface (port/LAG).

Note: In order to create a MAC-based VLAN group, the switch must be in Layer 2 mode.  To change the switch to Layer 2 mode, refer to System Settings Configuration on 200/300 Series Managed Switches. 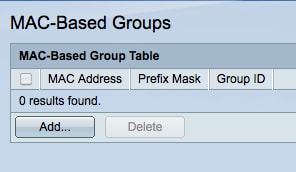 Step 3. In the MAC Address field, enter a MAC address that you want to configure to a VLAN group.

Step 4. Click the radio button that corresponds to the method you want to use in order to define the Prefix Mask.  The prefix mask looks at a certain number of bits and then assigns the MAC address to a VLAN group.

• Host — The entire MAC address is looked at and put into a group.  You can only group MAC addresses one at a time when you use host.

• Length — Only a section of the MAC address is looked at (from left to right) and then placed in a group.  The lower the length number, the fewer bits are looked at.  This means you can assign a large number of MAC addresses to a VLAN group at once. For example, all of the computers in your network are made by the same company.

Step 5. In the Group ID field, create and enter a VLAN group ID number with which to identify the MAC-Based VLAN group.

Step 6. Click Apply to create the MAC-based group and then click Close to exit the Add MAC-Based Group window.

Note: You can only map a VLAN group to a port/LAG that is in general mode. To change a port/LAG to general mode, refer to the document Configure VLAN Interface Settings on 200/300 Managed Switches. 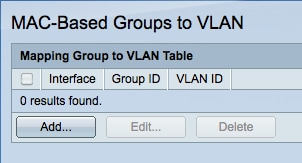 Step 3. Click the appropriate radio button in the Interface field to define an interface, and choose a specific port/LAG from the drop-down list.  This interface is mapped to the VLAN group.

• Port — A single physical port on the switch.

Step 4. Choose a VLAN group from the drop-down list in the Group ID field. These are the VLAN groups that you created in the previous section.

Step 5. Enter the number of the VLAN to receive the traffic from the VLAN group in the VLAN ID field.