This document describes the Simple Certificate Enrollment Protocol (SCEP), which is a protocol used for enrollment and other Public Key Infrastructure (PKI) operations.

SCEP was originally developed by Cisco, and is documented in an Internet Engineering Task Force (IETF) Draft.

Its main characteristics are:

Enrollment and usage of SCEP generally follows this work flow:

The request is sent as a HTTP GET request. A packet capture for the request looks similar to this:

The enrollment request is sent as a HTTP GET request. A packet capture for the request looks similar to this: 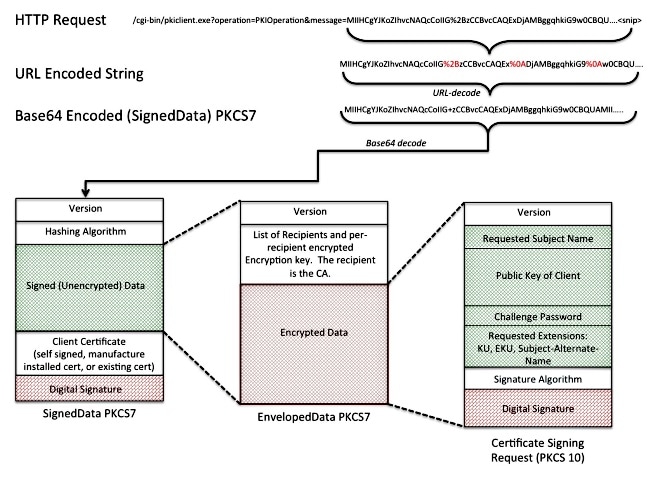 The response to the SCEP enrollment request is one of three types: 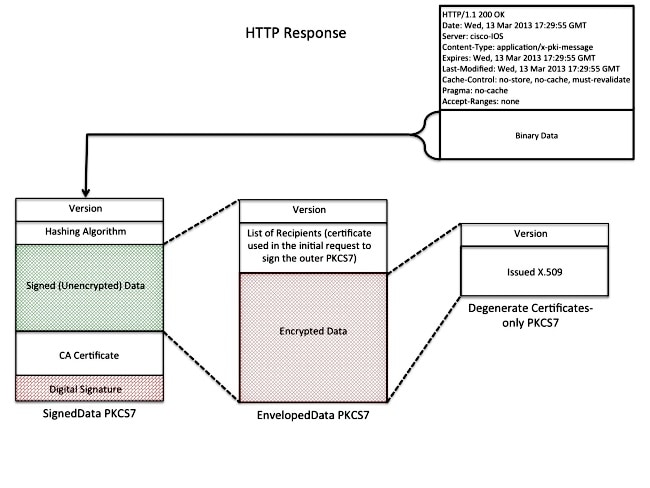 When the SCEP client's ID certificate approaches expiration, the SCEP client queries the CA for the "Shadow CA" Certificate. This is done with the GetNextCACert operation as shown here: 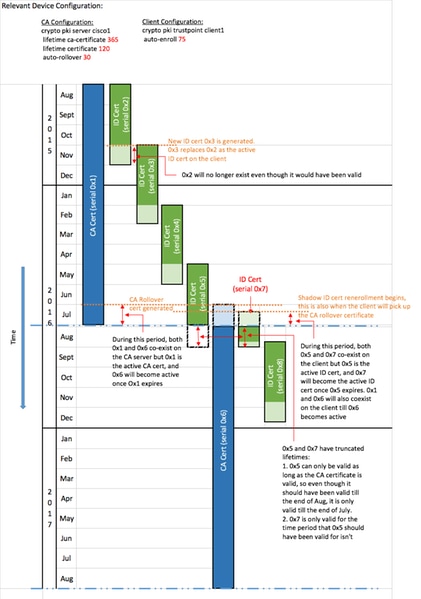 This structure is used as the building blocks of SCEP.

Note: PKCS#7 and PKCS#10 are not SCEP-specific.

PKCS#7 is a defined data format that allows data to be signed or encrypted. The data format includes the original data and the associated metadata necessary in order to perform the cryptographic operation.

The signed envelope is a format that carries data and confirms that the encapsulated data is not altered in transit via digital signatures. It includes this information:

The data encapsulated is not encrypted or obfuscated. This format simply provides protection against the message that is altered.

The Enveloped Data format carries data that is encrypted and can only be decrypted by the specified recipient(s). It includes this information:

PKCS#10 describes the format of a CSR. A CSR contains the information that clients request be included within their certificates:

Here is an example of a CSR:

Requests are sent with an HTTP GET of the form :

With the GET method, the message part is either plain text, or Distinguished Encoding Rules (DER)-encoded PKCS#7 converted to Base64. If the POST method is supported, content that would be sent in Base64 encoding with GET might be sent in binary format with POST instead.

Possible values for operations and their associated message values:

SCEP responses are returned as standard HTTP content, with a Content-Type that depends on the original request and the type of data returned. DER content is returned as binary (not in Base64 as for the request). PKCS#7 content might or might not contain encrypted/signed enveloped data; if it does not (only contains a set of certificates), it is referred to as a degenerate PKCS#7.