Implement the Performance License for the Integrated Service Router 4000

This document describes how to implement the Performance License on the Cisco Integrated Service Router 4000 (ISR4000) series routers.

ISR4000 series routers are based on the multi-core Control, Data and Services Plane CPUs and provide different performance levels that depend on the platform model.

Note: By default, each ISR4000 series model offers a base maximum throughput. For more information see the Product Overview site.

The Performance License increases the maximum throughput the device can provide.

In order to determine the throughput:

To explain the concept of Performance License it is worth to illustrate the difference between various models of ISR4000 in regard to their Data Plane architecture.

The ISR4451 can use up to nine Packet Processing Engine (PPE) cores for feature processing, encryption and decryption included, and a single core for Input and Output (I/O) processing. Each PPE core can handle one packet at a time. 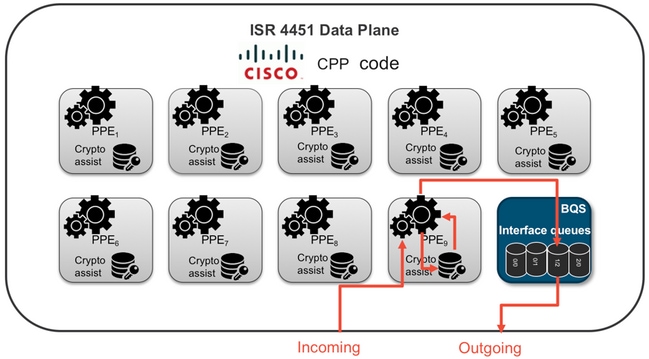 The ISR4431 has the same Data Plane architecture as ISR4451 except it can use up to five PPE cores for feature processing, encryption and decryption also included.

The ISR4351 and ISR4331 Data Plane architecture consists of up to three PPE cores used for feature processing and a single core for both I/O and crypto processing. 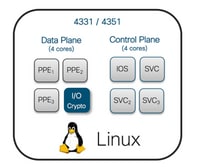 The ISR4321 and ISR4221 have a single PPE core for feature processing and another core for I/O and crypto processing. 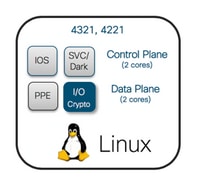 Differences on each ISR4000 series routers before and after the Performance License is applied:

Before the Performance License can be applied, one of several prerequisites need to be met. These depend on the license model (Smart or Traditional).

Register the device to the Smart/Virtual Account and ensure the proper Performance License is provisioned to the account.

Right To Use (RTU) License

Copy the license file to the router flash. Use the license install <flash:license-file> command to install it.

Use the platform hardware throughput level command in global configuration mode in order to activate the Performance License.

When the Performance License is activated on the ISR400 routers:

The Aggregate Shaper functionality is implemented in the Data Plane CPU core dedicated to I/O operations.

Traffic Charged Against the Performance License

Traffic Charged Against The License

Traffic Not Charged Against The License

A token bucket system (bit count) is implemented on the I/O Data Plane core to determine if the packets can be sent through an egress interface. Traffic shaping is applied when more bits are destined for external interfaces than the license allows for.

Packets can be sent as long as there are tokens in the bucket:

Note: Each external interface has the same bandwidth remaining ratio.

Through any period of oversubscription, the interfaces share the bandwidth equally, unless one has priority level traffic.

Note: By default, the built-in shaper does not differentiate between LAN/WAN interfaces. As a result, all interfaces queue packets when the aggregate egress traffic exceeds the licensed throughput. In such scenarios, QoS policies can be implemented to prioritize and weight traffic on all interfaces – not just the WAN interface(s).

Note: This example is based on 100Mbps.

Note: The counters are incremented for each packet processed under licensed throughput, in an oversubscription event. It increments an enqueue counter for those that are buffered and a drop counter when the packet has to be discarded.

The alert threshold is configurable. The syslog message can be used as an indicator for the licensed bandwidth.

The ISR4000 platforms offer a boost performance license that allows for an unthrottled Cisco Express Forwarding (CEF) performance. The device must use Cisco IOS-XE software version 16.7.1 or later. The aggregate shaper is disabled after the boost license is activated, as a result, the maximum throughput depends on the features used and it is no longer deterministic.

After the license installation, the Boost Performance is enabled automatically and the platform hardware throughput level boost command is added to the configuration.

Use the show license command to see the license state.

Note: In Cisco IOS-XE 17.3.1 and older versions the platform hardware throughput level boost command is only available after a successful registration in CSSM. The command is not available if the device had been registered in CSSM before the license is added to the Virtual Account license repository. You have to deregister and register back the device to CSSM to execute the platform hardware throughput level boost command.

Use the show license all command to see the license state:

In Cisco IOS-XE 17.3.2 and newer software versions there is no concept of device registration with Smart Licensing portal (Smart/Virtual Account). Unenforced licenses get activated upon the configuration change and later on the license usage is expected to be reported to Cisco as per policy. For more information see the Smart Licensing Using Policy site.

Additionally, in Cisco IOS-XE 17.3.2 onwards the Boost Performance license becomes a Right-To-Use (RTU) license. This means you do not need a prior authorization to activate this license.