This document explains how to identify bus error crashes and how to troubleshoot those crashes depending on the type of processor you have in your Cisco router.

Cisco recommends that you read Troubleshooting Router Crashes before proceeding with this document.

Note: This document does not apply to Cisco Catalyst switches or MGX platforms.

The system encounters a bus error when the processor tries to access a memory location that either does not exist (a software error) or does not respond properly (a hardware problem). A bus error can be identified from the output of the show version command provided by the router if not power-cycled or manually reloaded.

If you have the output of a show version or show technical-support command (from enable mode) from your Cisco device, you can use it to display potential issues and fixes. In order to use it, you must be a registered customer, be logged in, and have JavaScript enabled.

At the console prompt, this error message can also be seen during a bus error:

After this, the router reloads. In some cases, however, the router goes into a loop of crashes and reloads and manual intervention is required to break out of this loop.

Another related issue is a Versatile Interface Processor (VIP) crash. If this problem occurs, error messages similar to these are logged:

Finally, another bus error crash type is a line card crash on a Cisco 12000 Series Internet Router. If this problem occurs, error messages similar to these are logged in the show context output:

The first thing to do is to find out which memory location (also known as the "address" or "address operand") the router tried to access when the bus error occurred. With this information, you have an indication as to whether the fault lies with the Cisco IOS Software or the router hardware. In the example, "System restarted by bus error at PC 0x30EE546, address 0xBB4C4", the memory location that the router tried to access is 0xBB4C4. Do not confuse this with the program counter (PC) value above.

Once you have determined the address and the processor type, you can start with more detailed troubleshooting.

With the address accessed by the router when the bus error occurred, use the show region command to determine the memory location the address corresponds to. If the address reported by the bus error does not fall within the ranges displayed in the show region output, this means that the router tried to access an address that is not valid. This indicates that it is a Cisco IOS Software problem. Use the Cisco CLI Analyzer (registered customers only) to decode the output of the show stacks command and identify the Cisco IOS Software bug that causes the bus error.

On the other hand, if the address falls within one of the ranges in the show region output, it means that the router accessed a valid memory address, but the hardware corresponding to that address does not respond properly. This indicates a hardware problem.

Here is an example of the show region output:

Addresses are displayed in hexadecimal format. The addresses that fall within the "Start" and "End" ranges are valid memory addresses.

Still using the previous example, System restarted by bus error at PC 0x30EE546, address 0xBB4C4, this bus error crash comes from a Cisco 2500 router with the show region output. The address 0xBB4C4 is equivalent to 0x000BB4C4. Using the show region output, this address falls within the range of "main", or more specifically, "main:heap" or 0x000666B4-0x007FEFFF. As mentioned earlier, "main" corresponds to the main memory or the DRAM, so the DRAM chips need to be checked.

If this is a new router, or if the router has been moved from one location to another, the memory chips often become loose. It's a good idea to reseat or firmly push the memory chips into the slot. Most of the time, this is sufficient for solving this type of crash.

For bus error crashes with addresses that do not fall within the show region address ranges, use the Cisco CLI Analyzer to decode the output of the show stacks command and identify the Cisco IOS Software bug that is causing the bus error. If you are uncertain which bug ID may match or which Cisco IOS software version contains the fix for the problem, upgrading your Cisco IOS software to the latest version in your release train is one option that often resolves the issue since this usually contains the fix for a large number of bugs.

If you have the output of a show stacks or show technical-support (from enable mode) command from your Cisco device, you can use Cisco CLI Analyzer to display potential issues and fixes. To use Cisco CLI Analyzer, you must be a registered customer, be logged in, and have JavaScript enabled.

It is recommended that you read the section on Troubleshooting Bus Error Crashes on 68000 Processor Platforms before you proceed with this section.

The output of the show region command must be used to check the address reported by the bus error. To illustrate this, let's take the following example:

Using the show region command output below, you can verify that 0xC is not a valid virtual address, and you can conclude that the bus error was caused by a software problem. Use the Cisco CLI Analyzer (registered customers only) to decode the output of the show stacks or show technical-support (from enable mode) command and identify the Cisco IOS Software bug that is causing the bus error.

If you have a bus error at 0x65FFFFFF, the show region output takes the amount of memory into account and tells you that it's an illegal address (software bug).

In this case, the PC has jumped to the address 0x0 (probably because of a null pointer), but this is not where the instruction is located. This is a software problem so there is no need to check with the show region command.

On other RISC platforms (Cisco 3600, 4500, and so forth), you get a SegV exception when jumping to an illegal PC, not a bus error.

Another type of bus error crash that occurs from time to time is when the PC value is equal to the address value. For instance:

You should consider this crash as a regular processor memory parity error crash and follow the recommendations given in Processor Memory Parity Errors (PMPEs).

You should also consider upgrading the Cisco IOS software release to a version which has a fix for CSCdv68388 - "Change cache error exception handler to resume not crash" which has been fixed since Cisco IOS Software Release 12.2(10).

Verify that all network cards are supported by the Cisco IOS software. The Software Advisor (registered customers only) gives you the minimum versions of Cisco IOS software needed for hardware. Verify, also, that the bootflash image supports the hardware installed if you have a router that supports a boot image such as the Cisco 7200 or Cisco 7500 series router.

On 2600 and 3600 routers, the router's I/O memory is configurable as a percentage of the main memory. If the I/O memory settings are inappropriate for the installed network modules or WAN interface cards (WICs), the 2600/3600 platform may have trouble booting and may crash with bus errors.

If a software configuration change has recently been made, and the router is in a booting loop, a software bug may be causing this issue.

If the router is not able to boot up, you can bypass the configuration to identify whether that is causing the issue. Follow these steps:

If the router boots without any errors, there is a configuration issue causing the problem. Verify that your configuration is supported in the Cisco IOS software and by the hardware. If it is supported, use the Bug Toolkit (registered customers only) to identify any software bugs that you may be experiencing. Give serious consideration to installing the most recent maintenance release of the Cisco IOS software train that you are currently running.

If you are experiencing a bus error exception booting loop, it may be caused by mis-seated hardware. For lower-end platforms such as the 3600 or 4000 router, reseat the network modules/network processors.

For higher-end platforms such as the 7200 or 7500 routers, reseat the processor, VIP, port adapters, or line card that is reloading due to a bus error exception. 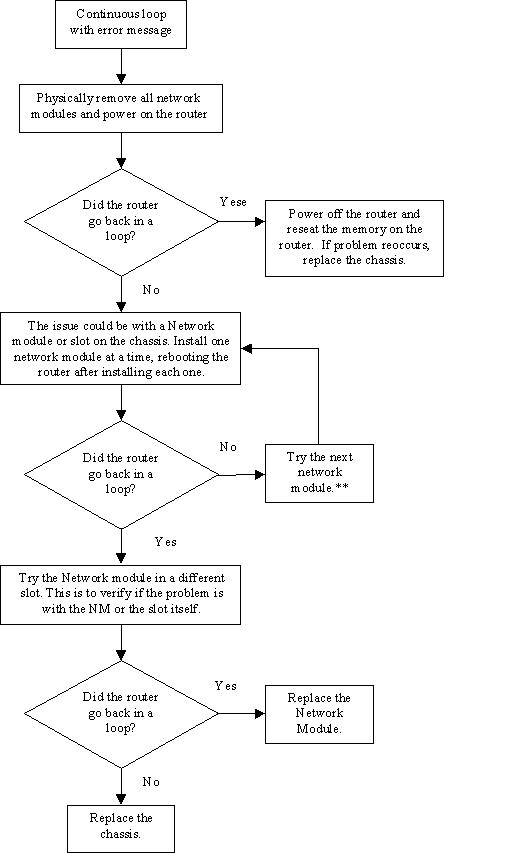 **If the router does not experience the continuous loop after following the troubleshooting steps above, then the problem may have been caused by a mis-seated network module. It is recommended that you monitor the router for 24 hours to be sure that the router continues to function without experiencing the issue again.

Information to Collect if You Open a Service Request