During power cycle events, CRS-1 systems have encountered some infrequent file system corruption issues on a specific type of Flash Disk. The affected Flash Disks were shipped in products from February through October 2006.

In some cases during RP boot-up, a problem will be reported when mounting the disk0: device, rendering the RP unable to complete the boot sequence. In other cases, problems may be observed during RP operation where files are unreadable, or attempts to write to the disk, such as committing a configuration change, results in failures.

Multiple Flash Disks have been used in CRS boards. A new FlashDisk introduced in February 2006 has encountered two different types of failures:

The following examples show outputs that may be observed as a result of CIS/MBR or file system problems.

Install (Node Preparation): Failed to access install device ' disk0:' after 600 seconds: No such file or directory.

Install (Node Preparation): Install device is either corrupt or missing. This node will now reload.

Device does not contain a valid magic number

Failed to get active package on node: 'sysdb' detected the 'warning' condition 'A SysDB
client tried to access a nonexistent item or list an empty directory'

The Serial Number list above can be used to determine each board that originally shipped with an affected Flash Disk. The firmware and/or image check should still be done as a confirmation that the correct Flash Disk has been identified.

For any case opened for this Field Nnotice, code the RMA as:

Upon re-installing the replacement board into the chassis (for Flash Disk slot0 replacements), the board will boot and automatically copy the required software and configuration files.

To follow the bug ID link below and see detailed bug information, you must be a registered customer and you must be logged in.

How To Identify Hardware Levels

The following image shows the Flash Disk introduced between February and October 2006 that should be replaced: 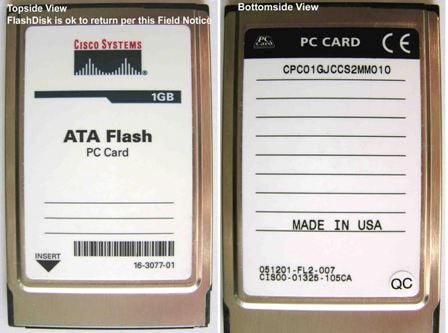 The following four images show the Flash Disks introduced between February and October 2006 that should not be replaced: 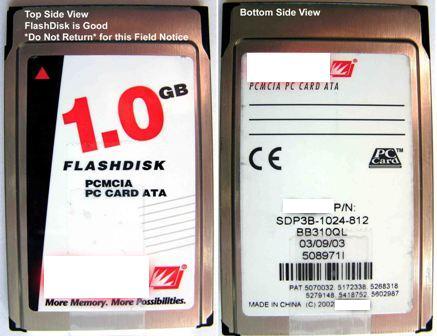 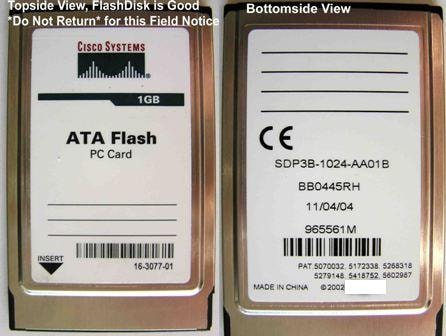 How To Identify Firmware Levels

Flash Disk firmware dated 1/25/06 or 6.12.06 is bad and needs to be replaced. All other firmware should be considered good. See examples below:

In order to confirm which version of firmware is present, issue the following command:

The following output examples show the affected Flash Disk with two different firmware levels introduced since February 2006 that should be replaced:

This is an example of a Flash Disk firmware level which is fine and should not be replaced via this Field Notice:

Product Alert Tool - Set up a profile to receive email updates about reliability, safety, network security, and end-of-sale issues for the Cisco products you specify.