What you will learn

Cisco has evaluated the AMD processor line for its use in VDI deployments to provide our customers with guidance about which processors provide the best starting price-to-performance ratio for The Login VSI knowledge worker benchmark workloads. This workload represents the most commonly used persona and delivery mechanisms.

This document provides an overview of the sixth-generation Cisco UCS product line, an update on the latest VMware ESXi and Citrix Virtual Apps and Desktops products that support the AMD EPYC processors, and an overview of our selection process and test methodology.

The document concludes with guidance for the starting configuration of 3rd Gen AMD EPYC processors by knowledge worker persona and delivery type.

The document begins with an overview of the Cisco UCS and VMware products used in the testing discussed in this document.

Cisco UCS is a next-generation data center platform that unites computing, networking, and storage access. The platform is optimized for virtual environments. It is designed using open industry-standard technologies and aims to reduce TCO and increase business agility. The system integrates a low-latency lossless 40 Gigabit Ethernet unified network fabric with enterprise-class x86-architecture servers. It is an integrated, scalable, multichassis platform in which all resources participate in a unified management domain (Figure 1). 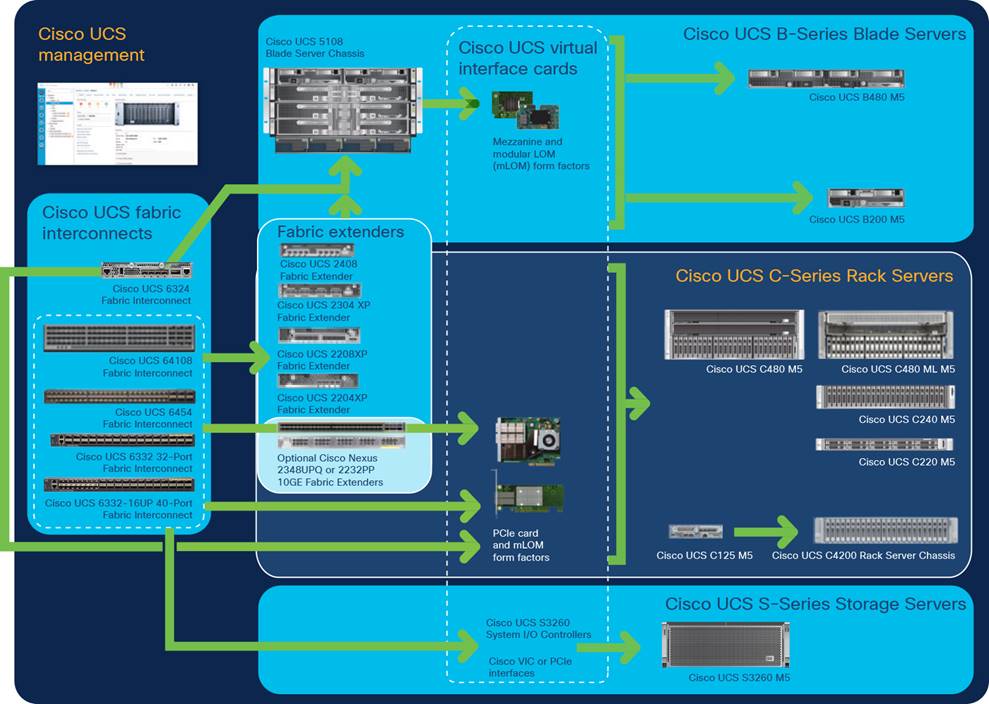 The main components of Cisco UCS are:

●    Computing: The system is based on an entirely new class of computing system that incorporates blade servers and modular servers.

●    Network: The system is integrated onto a low-latency, lossless, 100-Gbps unified network fabric. This network foundation consolidates LANs, SANs, and high-performance computing (HPC) networks, which are separate networks today. The unified fabric lowers costs by reducing the number of network adapters, switches, and cables and by decreasing power and cooling requirements.

●    Virtualization: The system unleashes the full potential of virtualization by enhancing the scalability, performance, and operational control of virtual environments. Cisco® security, policy enforcement, and diagnostic features are now extended into virtualized environments to better support changing business and IT requirements.

●    Management: Cisco UCS uniquely integrates all system components, enabling the entire solution to be managed as a single entity by Cisco UCS Manager. The manager has an intuitive GUI, a command-line interface (CLI), and a robust API for managing all system configuration processes and operations.


Cisco UCS is designed to deliver:

●      A cohesive, integrated system that unifies the technology in the data center; the system is managed, serviced, and tested as a whole

●      Industry standards supported by a partner ecosystem of industry leaders

Because they support unified fabric, Cisco UCS 6400 Series Fabric Interconnects provide both LAN and SAN connectivity for all servers within their domains. For more details, see https://www.cisco.com/c/dam/en/us/products/collateral/servers-unified-computing/ucs-b-series-blade-servers/6400-specsheet.pdf.

The Cisco UCS 6454 Fabric Interconnect is a one-rack-unit (1RU) top-of-rack (ToR) switch that mounts in a standard 19-inch rack such as Cisco R Series Racks. It provides these features and capabilities:

●      Support for FCoE on all Ethernet ports

Designed to operate both in standalone environments and as part of a Cisco UCS managed configuration, these servers enable organizations to deploy systems incrementally—using as many or as few servers as needed—on a schedule that best meets the organization’s timing and budget. Cisco UCS C-Series servers offer investment protection through the capability to deploy them either as standalone servers or as part of Cisco UCS.

One compelling reason that many organizations prefer rack-mount servers is the wide range of I/O options available in the form of PCIe adapters. Cisco UCS C-Series servers support a broad range of I/O options, including interfaces supported by Cisco as well as adapters from third parties.

The Cisco UCS C245 M6 Rack Server (Figure 3 and Figure 4) is a small-form-factor (SFF) server. It extends the capabilities of the Cisco UCS portfolio in a 2RU form factor with the addition of the AMD CPUs, with 16 DIMM slots per CPU for 3200-MHz DDR4 DIMMs with individual DIMM capacity points up to 256 GB. The maximum memory capacity for two CPUs is 8 TB (for 32 x 256-GB DDR4 DIMMs). The C245 M6 SFF server has:

●      Up to 24 front SFF SAS/SATA hard-disk drives (HDDs) or solid-state disks (SSDs; optionally up to four of the drives can be Non-Volatile Memory Express [NVMe])


The server provides internal slots for the following options:

The Cisco UCS C245 M6 server can be used by itself or as part of Cisco UCS, which unifies computing, networking, management, virtualization, and storage access into a single integrated architecture enabling end-to-end server visibility, management, and control in both bare-metal and virtualized environments.

The server has one Riser 2 option:


The server has three Riser 3 options:

The AMD EPYC™ 7003 Series Processors are built with an innovative Zen 3 core and AMD Infinity Architecture. The AMD EPYC switch on a chip (SoC) offers a consistent set of features across 8 to 64 cores. Each 3rd Gen EPYC processor consists of up to eight core complex dies (CCD) and an I/O die (IOD). Each CCD contains one core complex (CCX), so that each CCD contains up to eight Zen 3 cores. Using the AMD Infinity Fabric, the CCDs connect to the IOD to access memory, I/O, and each other. Up to eight memory channels, 4 TB of high-speed memory per socket, and 128 lanes of PCIe Gen 4 are supported.

AMD EPYC 7003 Series Processors are built with the specifications listed in Table 1.

Whether you are using blade, rack, or storage servers from Cisco, the Cisco UCS VIC (Figure 5) provides optimal connectivity. 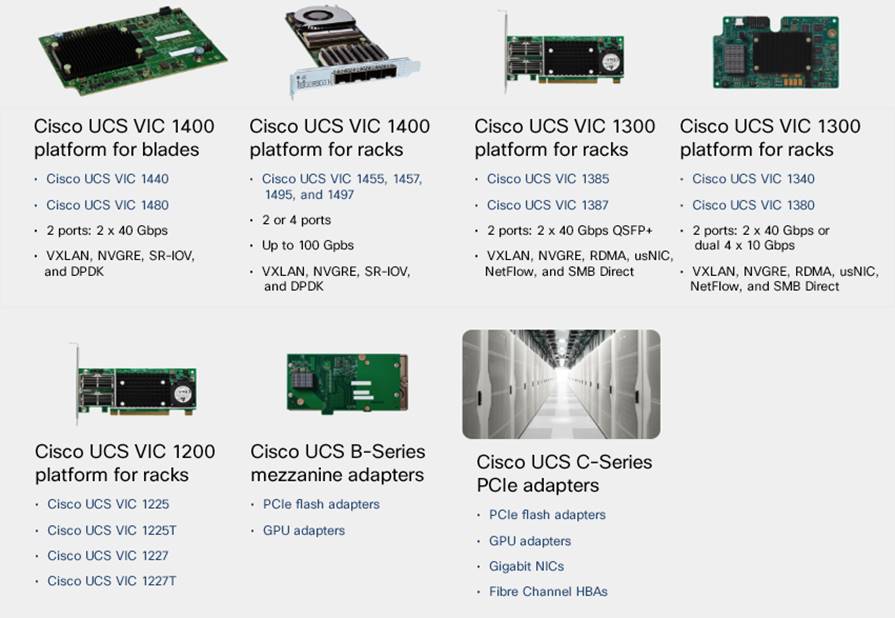 The Cisco VIC 1477 (Figure 6) is a dual-port quad SFP28 mLOM card designed for the M6 generation of Cisco UCS C-Series Rack Servers. The card supports 40 and 100 Gigabit Ethernet and FCoE. The card can present PCIe standards-compliant interfaces to the host, and these can be dynamically configured as network interface cards (NICs) or HBAs. 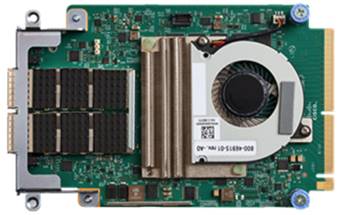 This section describes the options you can configure in the Cisco UCS BIOS for VDI workloads. 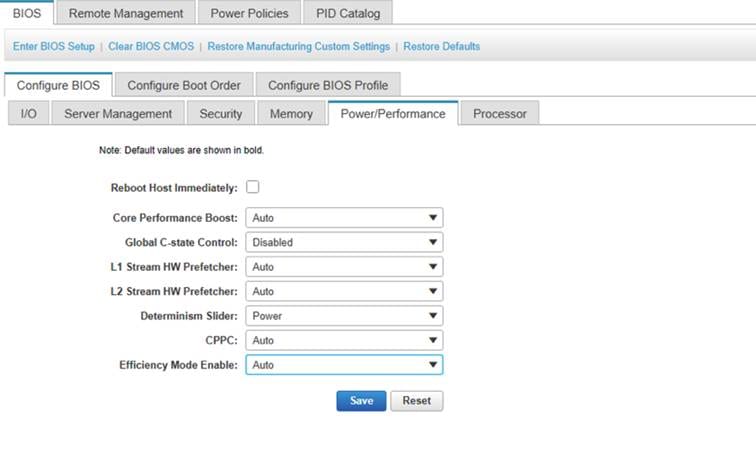 VMware vSphere is a virtualization platform for holistically managing large collections of infrastructure (resources including CPUs, storage, and networking) as a seamless, versatile, and dynamic operating environment. Unlike traditional operating systems that manage an individual machine, VMware vSphere aggregates the infrastructure of an entire data center to create a single powerhouse with resources that can be allocated quickly and dynamically to any application in need.

VMware vSphere 7.0 has several improvements and simplifications including the following:

●      Fully featured VMware vSphere Client (HTML5) client: The flash-based vSphere Web Client has been deprecated and is no longer available.

●      Assignable hardware: A new framework was developed to extend support for vSphere features when customers use hardware accelerators.


For more information about VMware vSphere and its components, see https://www.vmware.com/products/vsphere.html.

VMware vCenter Server provides unified management of all hosts and virtual machines from a single console and aggregates performance monitoring of clusters, hosts, and virtual machines. vCenter Server gives administrators deep insight into the status and configuration of computing clusters, hosts, virtual machines, storage, the guest OS, and other critical components of a virtual infrastructure. VMware vCenter manages the robust set of features available in a VMware vSphere environment.

●      Citrix Gateway: The robust NetScaler Unified Gateway, which allows secure, contextual access to the applications and data you need to do your best work, is now Citrix Gateway.


For additional details, refer to the Citrix documentation here.

Figure 10 and Figure 11 providcitrixe an overview of the test platform used to evaluate and select processors. 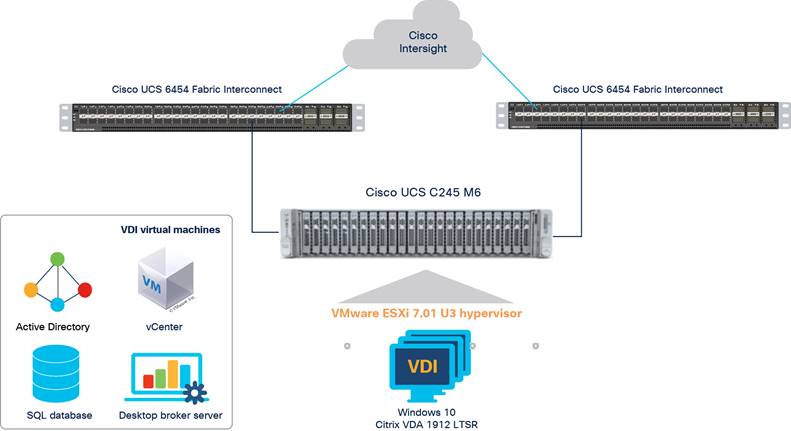 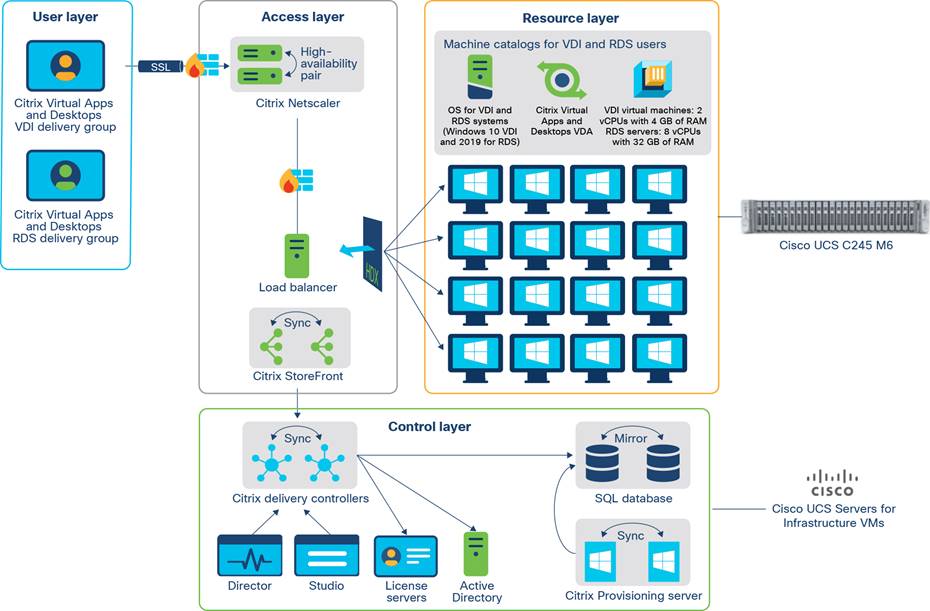 
The software components of the solution are as follows:

To evaluate the 3rd Gen AMD EPYC processors, we created a strategy to test for the optimal price-to-performance ratio for knowledge workers: the mainstream user persona for virtual client computing, also referred to as end-user computing by VMware.

We evaluated each processor tested against the combination of Login VSI test workloads shown in Table 2, in benchmark mode.

We started with our knowledge of the performance of the AMD EPYC processors and compared their benchmark performance to that of the competitive processors to guide our initial selections for evaluation. Our plan was to identify a processor for each user type that delivered the best price-to-performance ratio for both the VDI and Remote Desktop Session Host (RDSH) delivery modalities for Citrix Virtual Apps and Desktops. We found that the AMD EPYC 7713 processor was sufficient to run any VDI workload on Cisco UCS.

For the knowledge worker workload we created a Citrix Virtual Apps and Desktops virtual machine with specifications as shown in Table 3.

This section presents the data from the test runs for the processor selected for the test.

In some cases, these workers can be served by RDSH server sessions or published applications. In most cases, organizations provide a medium-capability Windows 10 virtual desktop to these users.

We tested both use cases using the Login VSI Knowledge Worker workload in benchmark mode. You can find additional information about Login VSI and all the workloads we tested for this document here.

The test results are summarized here and in Figure 12, Figure 13, and Figure 14. 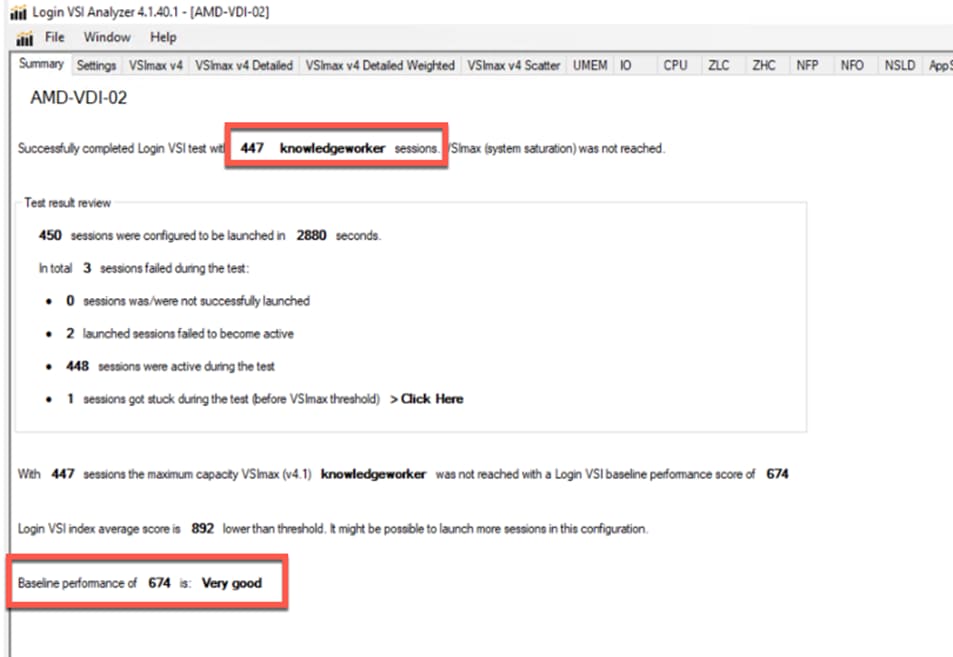 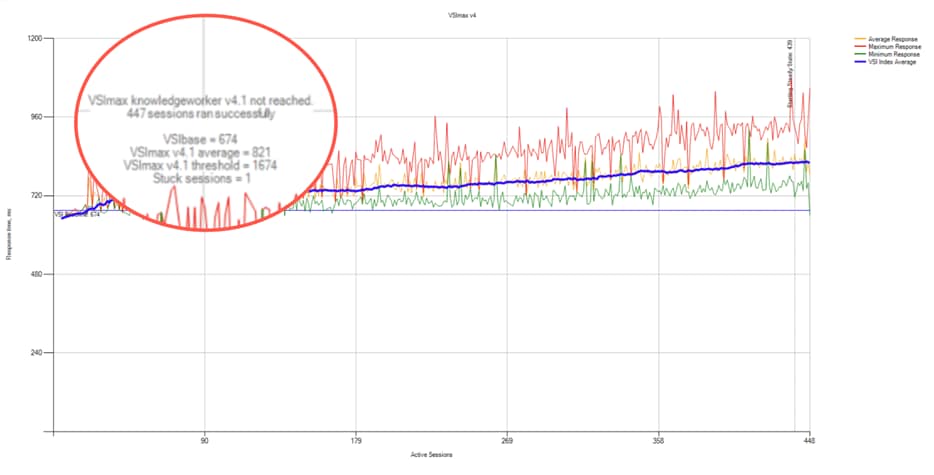 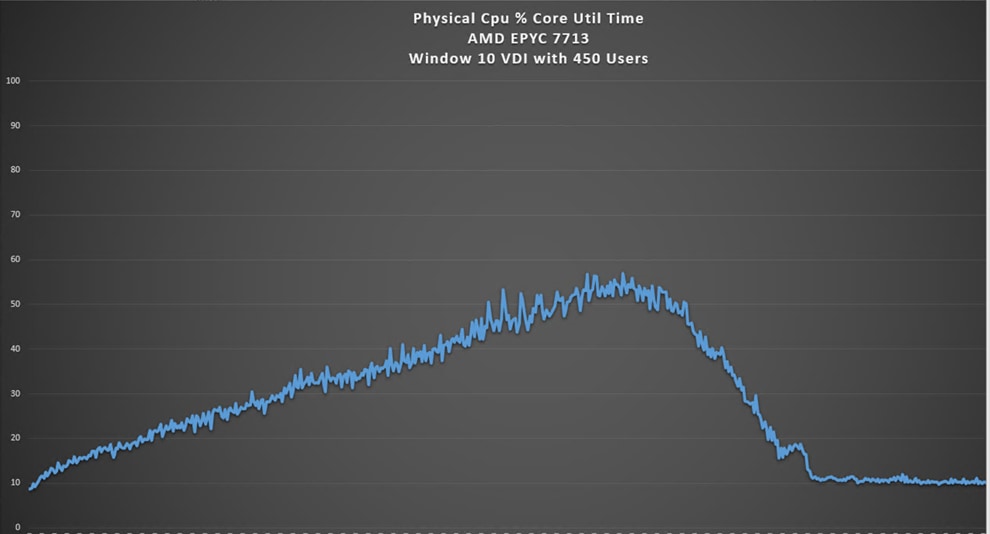 The test results are summarized here and in Figure 15, Figure 16, and Figure 17. 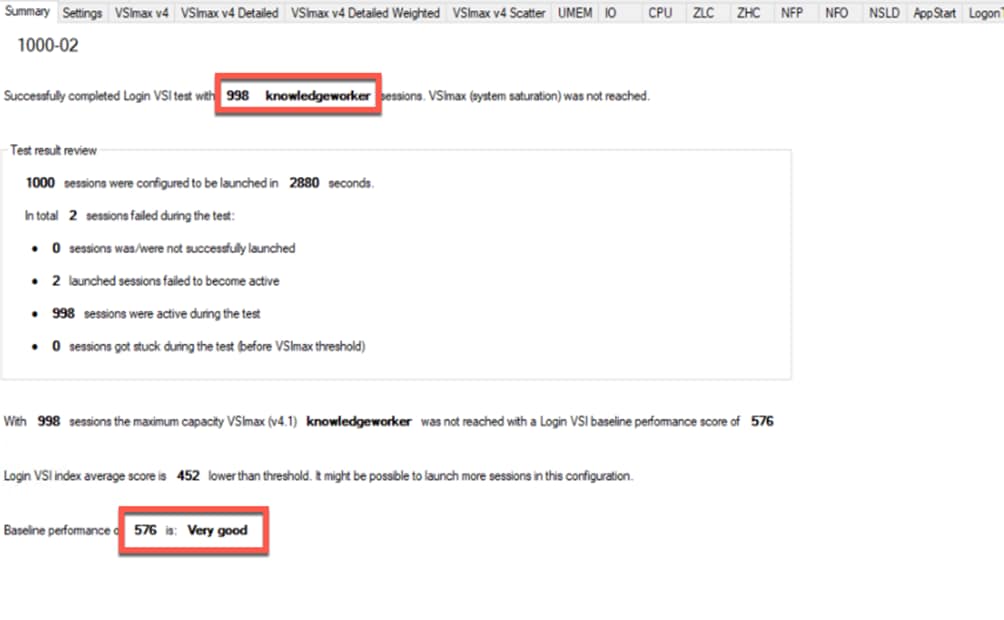 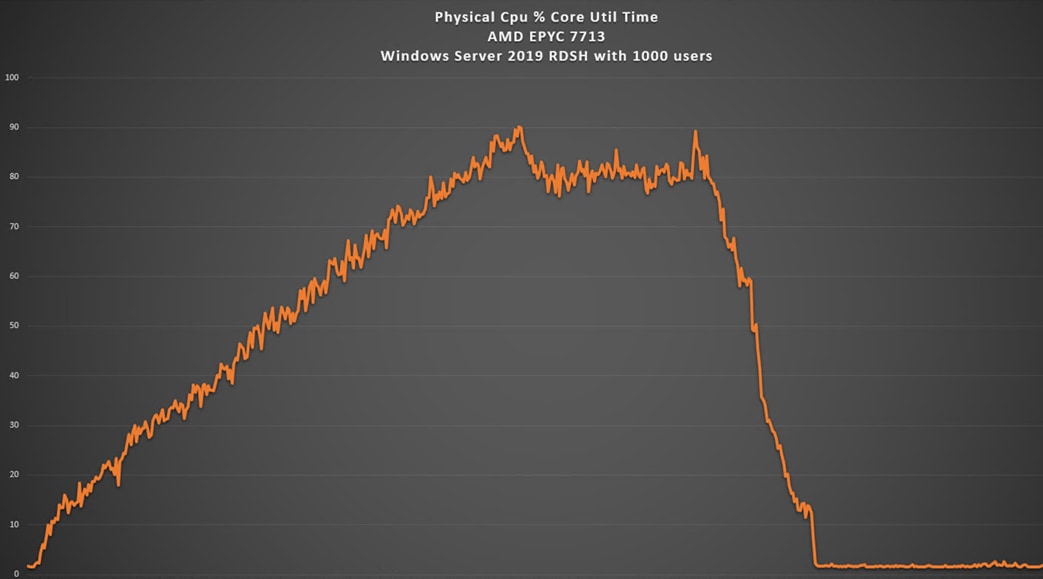 By carefully evaluating the AMD EPYC 7713, we determined that this processor has more than enough power to run any VDI or RDSH workload. The CPU was never saturated, and the host ran out of available memory before the CPU was stressed. The AMD EPYC processor is highly recommended for VDI workloads, but especially for graphics-intensive workloads, for which additional CPU cores can be beneficial.

However, just because you can push the processor, doesn’t mean you should. Any VDI workload is going to have plenty of processing power and great end-user performance, but we do not recommend increasing user density to the point that it may be detrimental to a large number of users if the server host were to fail.

The optimal price-to-performance characteristics for the knowledge worker user type for Citrix Virtual Apps and Desktops 1912 LTSR and Microsoft Windows 10 and Server 2019 virtual desktops sessions are listed in Table 4 and Table 5.

We tried to identify the maximum recommended workload for the AMD EPYC processor and user type for Windows 10 virtual machines for knowledge workers. The maximum recommended workload is used to plan for maintenance and failure scenarios. During normal operations, fewer virtual machines would run on the clusters supporting your users. However, with the immense power of the AMD processors, we ran out of RAM before exhausting the processors’ capabilities.

Each customer’s environment and workloads are different. The density numbers shown here are starting points for your unique environment. They are not intended to be performance guarantees.

For graphics-intensive workloads and for enhanced-experience Windows 10 workloads, you can use GPUs with additional processors that are suited for that purpose.

For additional information, see the following: