What are breakouts and how do you use them?

Breakout mode on network equipment (switches, routers, and servers) opens up new ways for network operators to keep up with the pace of bandwidth demand. By adding high-speed ports that support breakout, operators can increase faceplate port density and enable upgrade to higher data rates incrementally.

What is breakout mode?

Breakout mode is when a high-speed, channelized port on a network element is broken down into multiple low-speed ports, each going to multiple network elements. For example, a switch with 400G ports can be connected to 100G ports.

* Wavelengths, fibers, or both

In addition, some transceivers utilize multiple optical wavelengths on a single fiber and breakout isn’t offered because of the complexities of optical muxing/demuxing, including power level imbalances and because it hasn’t been tested.

Also, some transceivers like the QSFP-100G-SR-BD and QSFP-40G-SR-BD don’t have breakout capability even though they have 2x50G (2x25G-PAM4) and 2x20G optical lanes that operate on duplex fiber, because they weren’t designed for breakout.

What types of breakout options are available?

Breakout is physically implemented with cables or transceivers. Some of the options include breakout DACs, breakout AOCs, and transceivers. 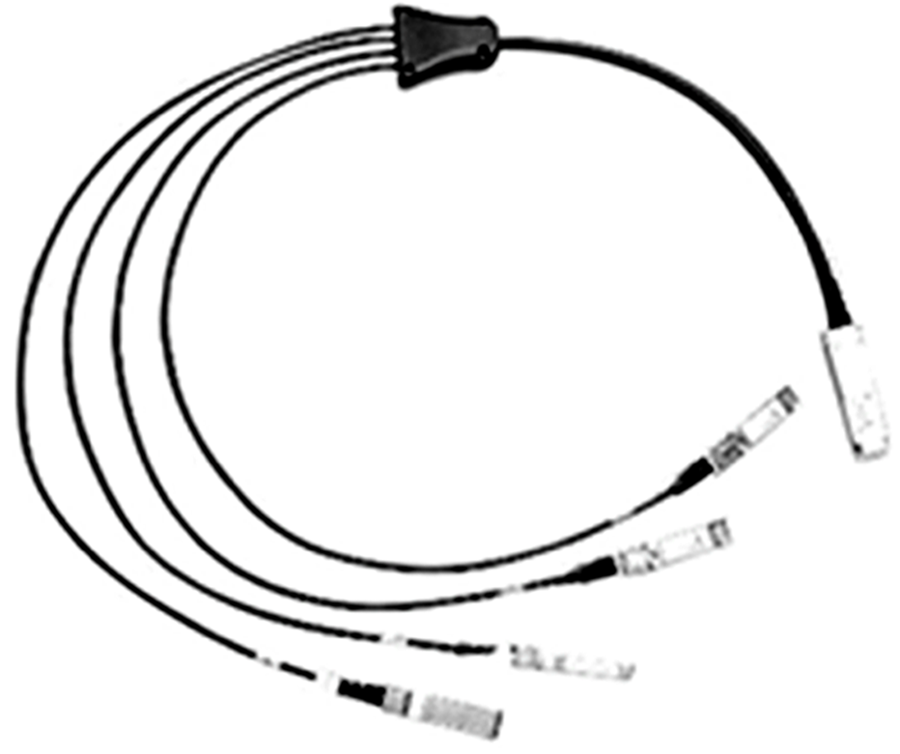 Active Optical Cables (AOCs) are fixed length and made of multiple optical cables, generally 1 to 25 m long, and include the modules that plug into the equipment ports as shown in Figure 3. 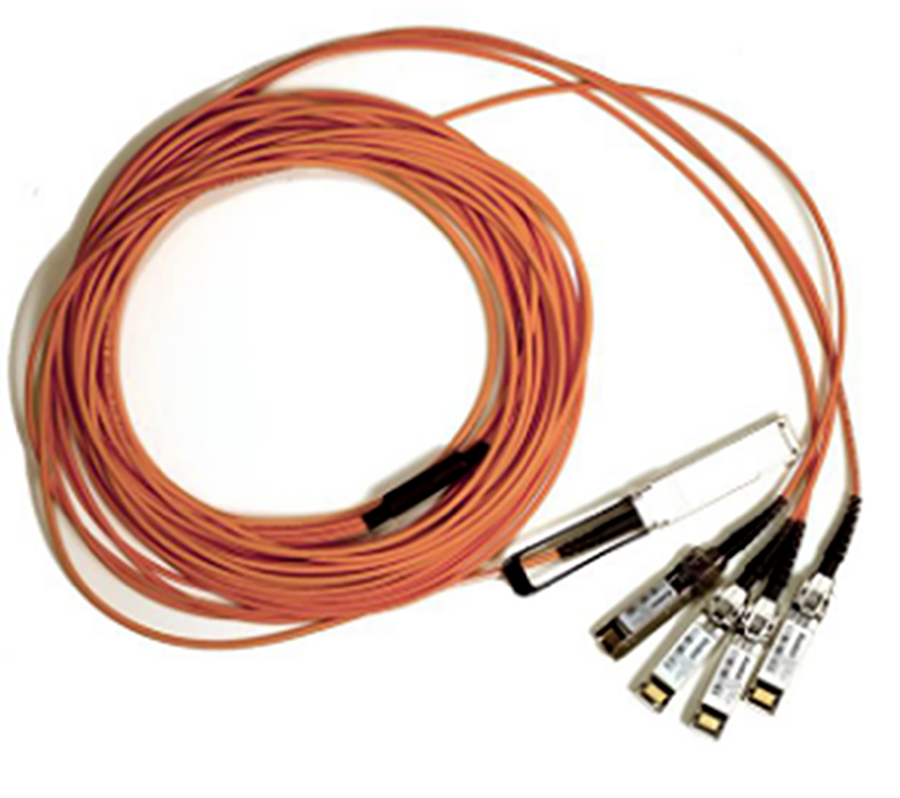 Transceivers could use either Single-Mode Fiber (SMF) or Multimode Fiber (MMF) when paired with a breakout cable as shown in Figure 4. 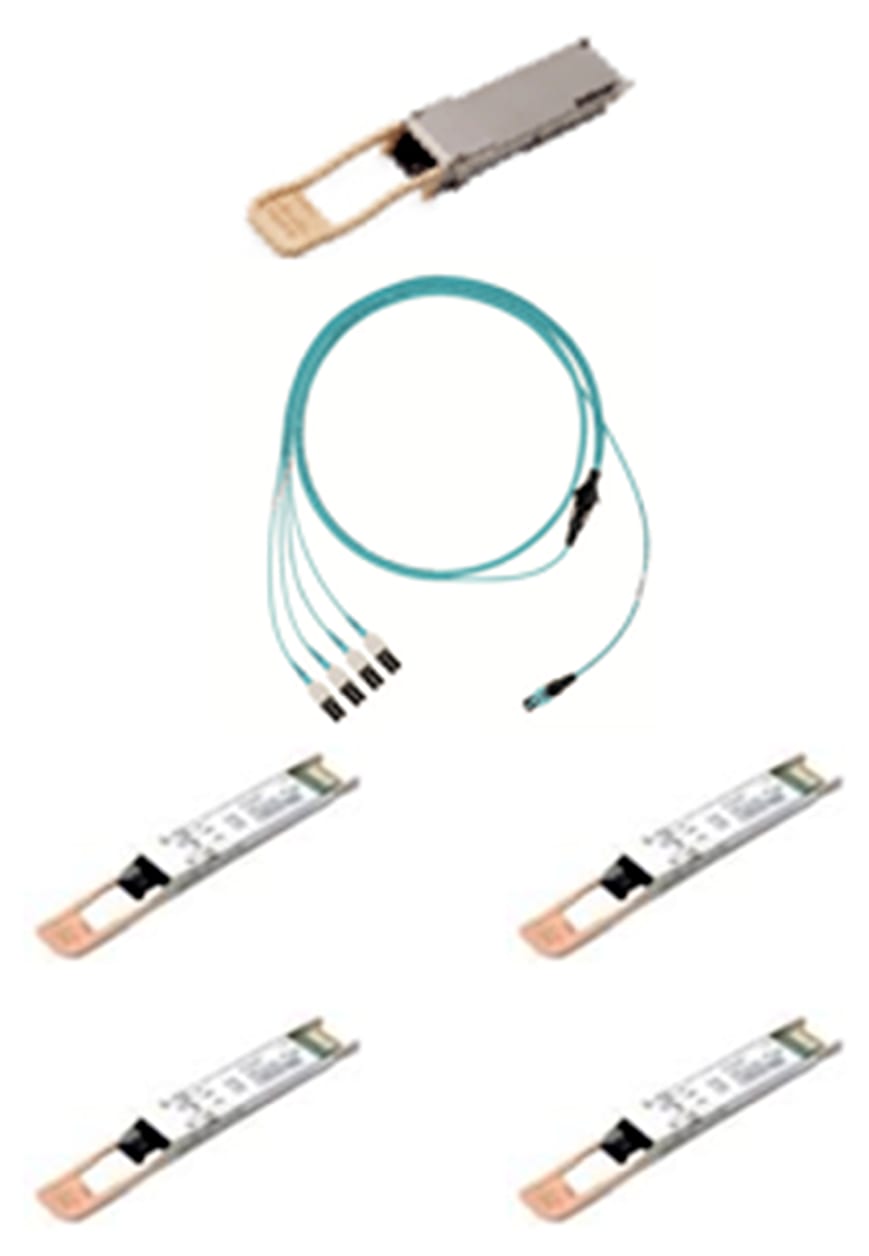 Examples of transceivers used in breakout applications are as follows.

For a full list and mapping of which optics can connect to each other via breakout, see the Optics-to-Optics Interoperability Matrix. Below is an example.

If your fiber cable vendor doesn’t have a standard breakout patch cord, and you request a custom design, you can use the diagram below as a guide. The patch cord doesn’t depend on the data rate. The main consideration is whether the fiber type is SMF or MMF.

Transceivers that MPO-12 used for breakout

The physical connections are as follows.

Schematic of MPO-12 for breakout

The transmit and receive of the optical lanes of the MPO-12 interface occupy the positions depicted in the following figure when looking into the module receptacle with the connector keyway feature on top. 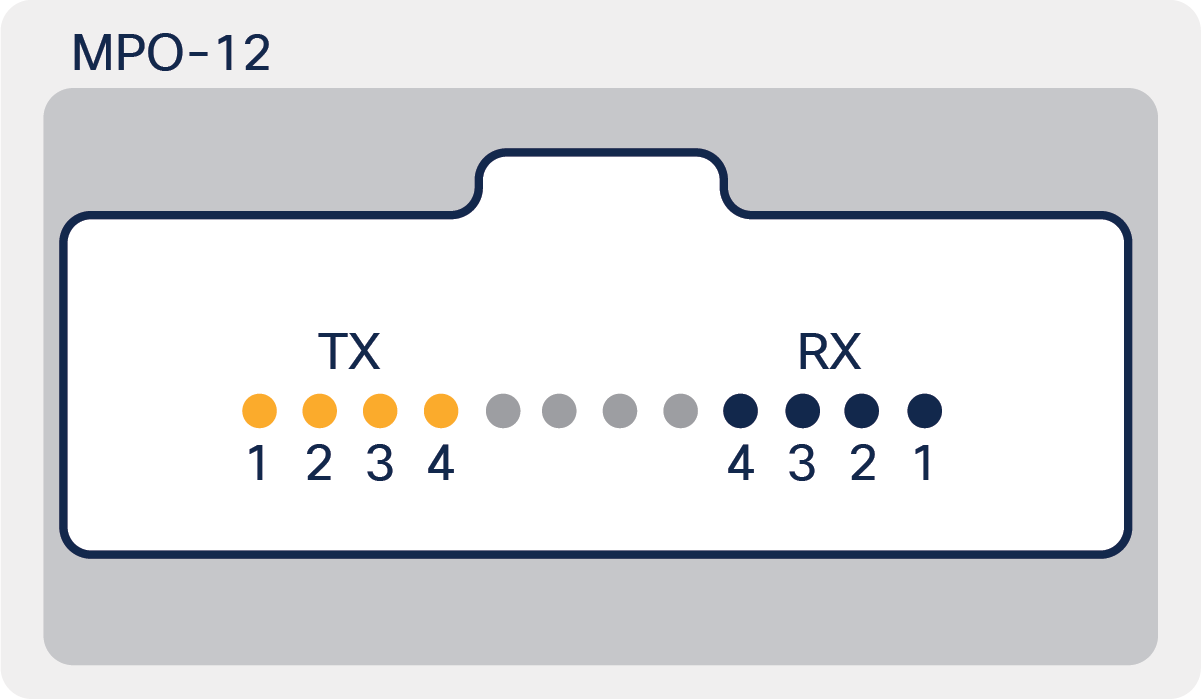 The transmit and receive of the optical lanes of the MPO-24 interface occupy the positions depicted in the following figure when looking into the module receptacle with the connector keyway feature on top. 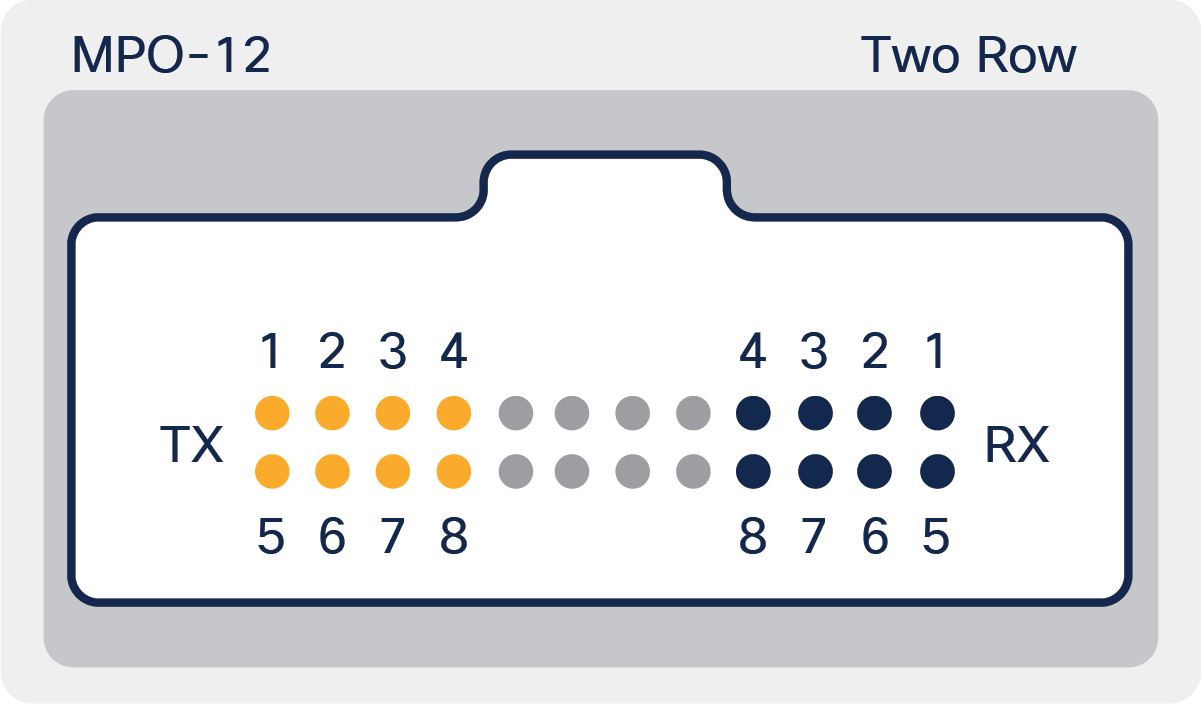 For the QDD-2X100-LR4-S and QDD-2X100-CWDM4-S, the transceivers utilize 2x CS connectors for breakout. Each CS connector has a full duplex channel as shown in the following diagram.

The advantage of the new CS connector (Figure 7) provides breakout capability at the transceiver (Figure 8) instead of requiring a breakout cable or breakout cartridge in a patch panel. Traditional assemblies use MPO connectors on one end and multiple LC duplex connectors at the other end. 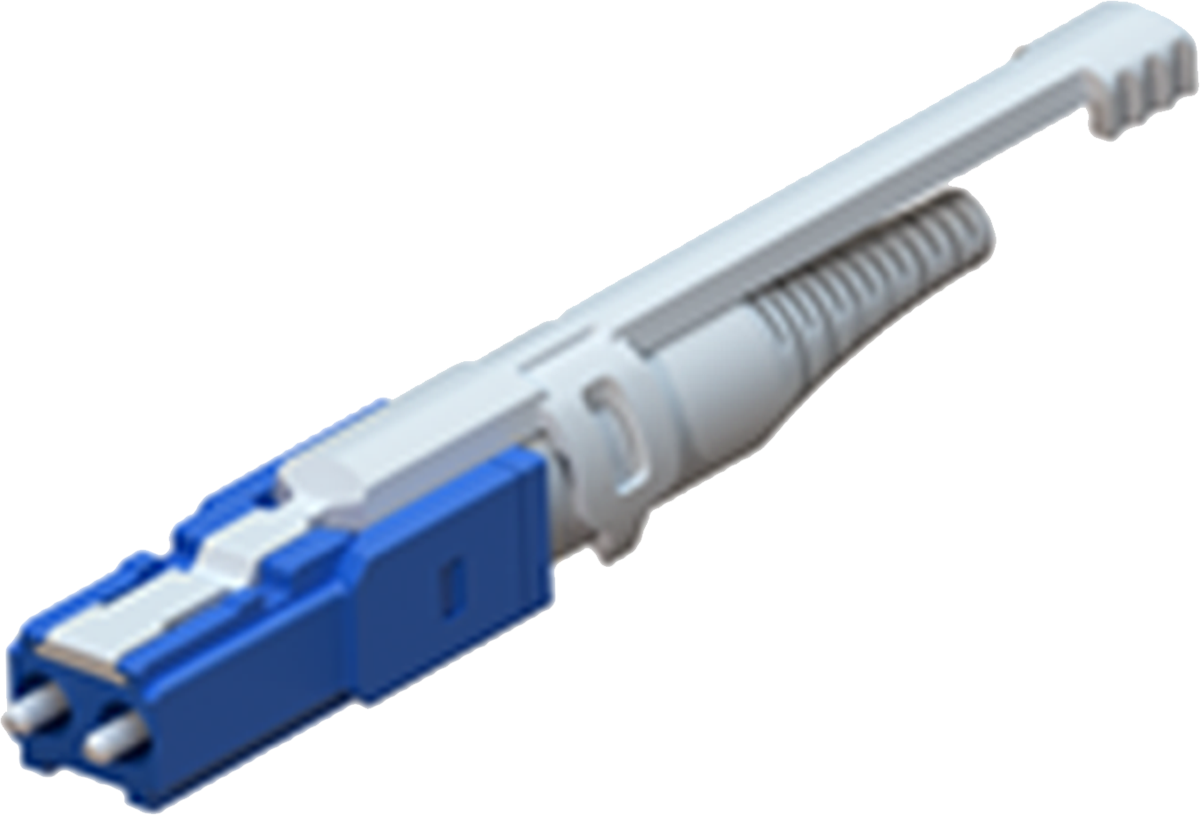 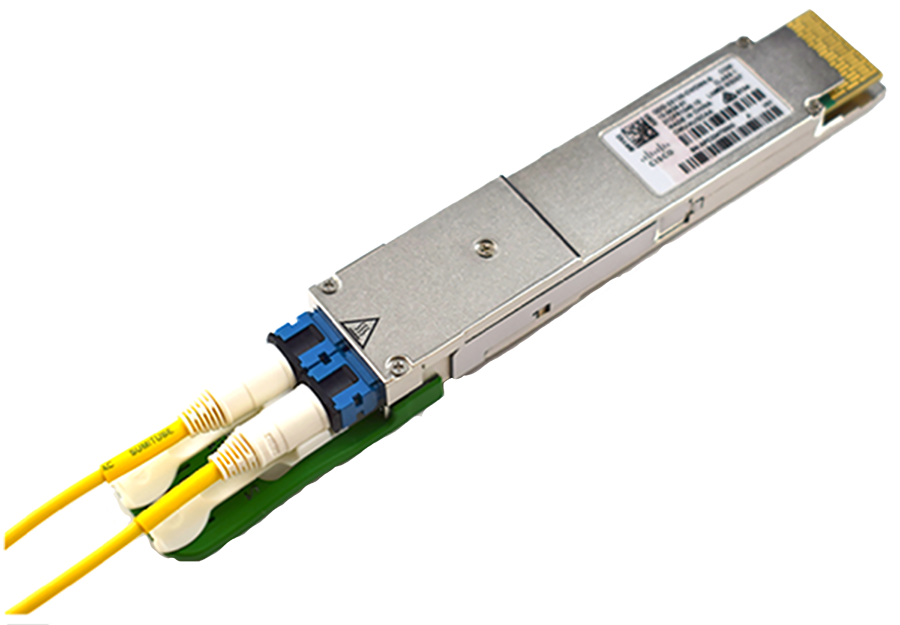 The transmit and receive of the optical lanes of the dual CS interface occupy the positions depicted in the following figure when looking into the module receptacle with the connector keyway feature on top. 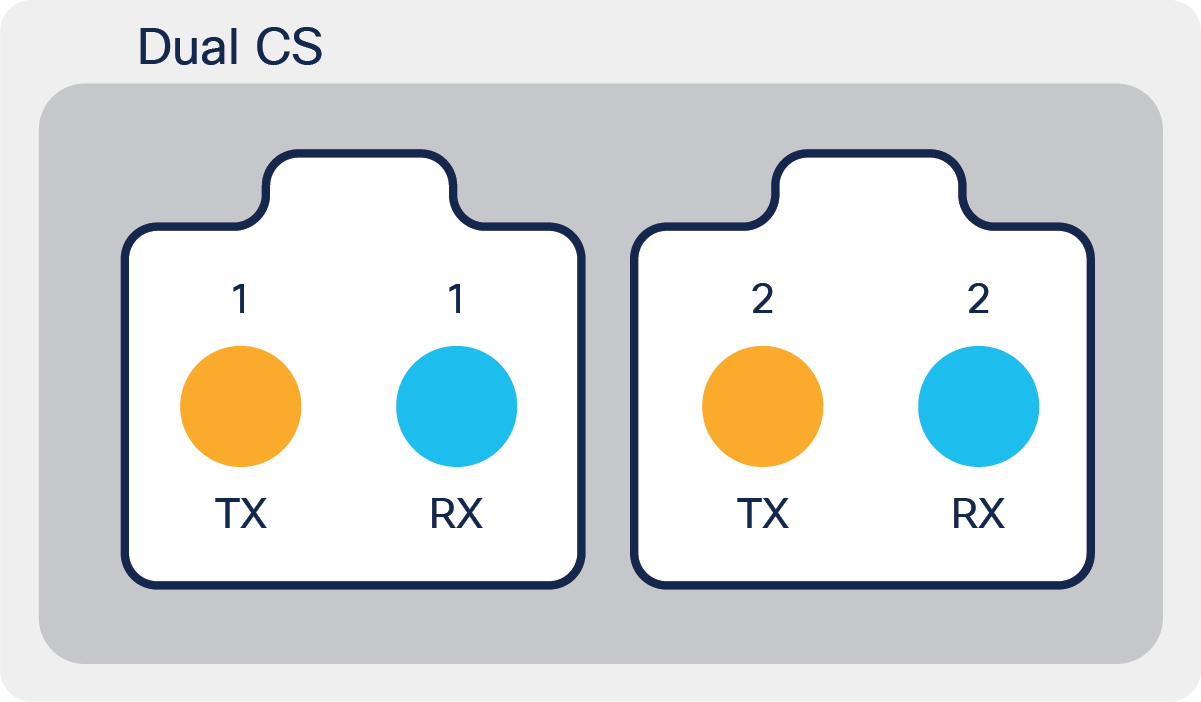 For the QDD-400G-SR8, the transceiver utilizes the MPO-16 connector for breakout to 2x QSFP-100G-SR4-S modules as shown in the following diagram with breakout to 8x SFP-50G-SR.

And alternate breakout to 2x QSFP-200G-SR4 is shown in the following figure.

The transmit and receive of the optical lanes of the MPO-16 interface occupy the positions depicted in the following figure when looking into the module receptacle with the connector keyway feature on top. 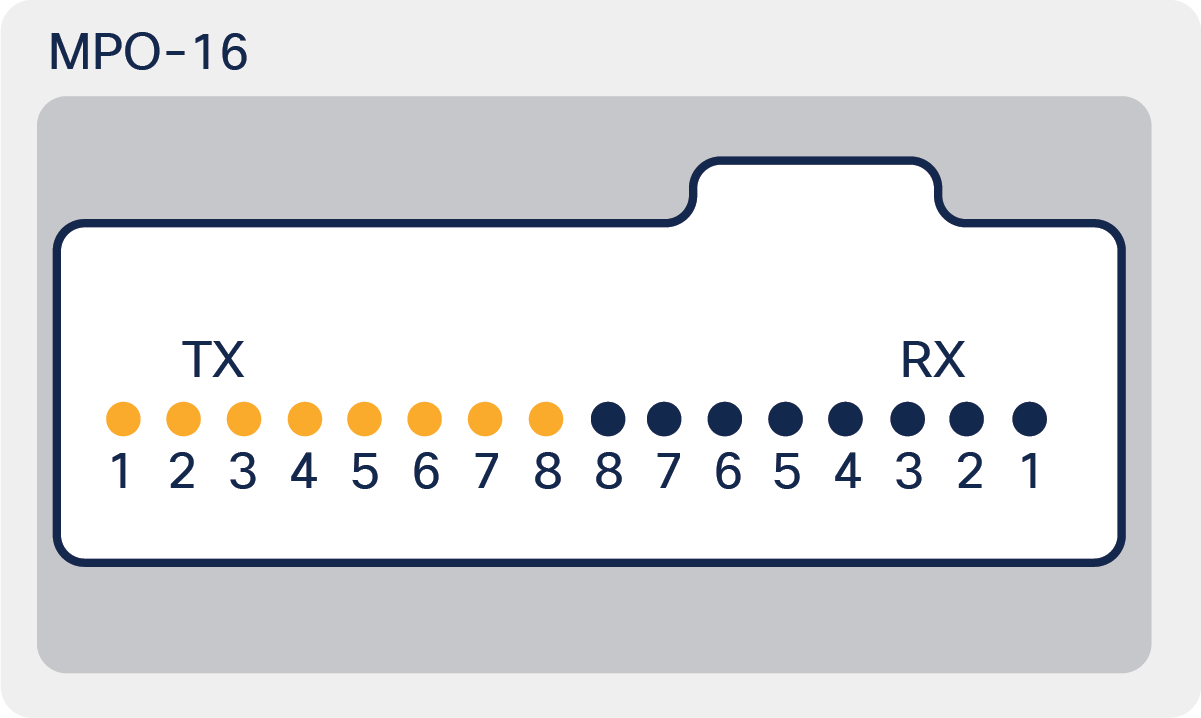 Remember, fiber breakout patch cords or cartridges are for pluggable optic transceivers. If you’re using an AOC (Active Optical Cable) such as QSFP-4X10G-AOCxM or copper cables such as QSFP-4SFP25G-CUxM, the breakout structure may be built into the cable because they are pre-terminated and plug directly into the QSFP- or SFP-type ports. Therefore, these cables do not need a separate fiber breakout patch cord.

Comparing downlink density for switches with and without breakout capability

While breakout is not a new concept, it is becoming increasingly important as equipment manufacturers look to dramatically increase bandwidth and faceplate density while still having access to low-speed ports. For example, consider the advantages of a 1RU 19-inch fixed-port switch, which has a faceplate with 36x QSFP ports as shown in figure 17 that can be used as either uplinks or downlinks. The ports are generally QSFP+ (40G), QSFP28 (100G), or QDD (400G). Compare this with an example of a same-size switch that has 48x single-lane downlink ports, which cannot be broken out, and 6x QSFP uplink ports (see Figure 18). The data rates of the downlink ports would match the lanes of the QSFP ports. For example, 10G SFP+ for QSFP+, 25G SFP28 for QSFP28, and 50G SFP56 for QDD.

Table 4 shows a similar comparison between 400G QSFP-DD switches. In this case, the switch that supports breakout in all ports provides triple the downlink port density of the single-lane type.

For 400G QDD (also known as QSFP56-DD) configurations the oversubscription changes to 1:1 with 2400 Gbps of both upstream and downstream capacity because QDD ports have 8 lanes and thus have 2x the capacity of QSFP+ or QSFP28 ports that have 4 lanes.

●      Access to lower-speed interfaces. For example, the QSFP-4X10G-LR-S transceiver enables a switch with only QSFP ports to connect 4x 10G LR interfaces per port.

●      More difficult replacement strategy. When one of the ports on a breakout transceiver, AOC or DAC, goes bad, it requires replacement of the whole transceiver or cable.

●      Not as customizable. In switches with single-lane downlinks, each port is individually configured. For example, an individual port could be 10G, 25G, or 50G and could accept any type of transceiver, AOC or DAC. A QSFP-only port in breakout mode requires a group-wise approach, where all interfaces of a transceiver or cable are the same type.

Other considerations for breakout

Breakout enables redundant connectivity. Consider the example in Figure 9, which shows QSFP28 100G transceivers in switch and server ports, where the 4x25G lanes of each transceiver are broken out into 50G (2x25G) connections. The breakout capability provides redundant 50G connectivity between switches and servers. 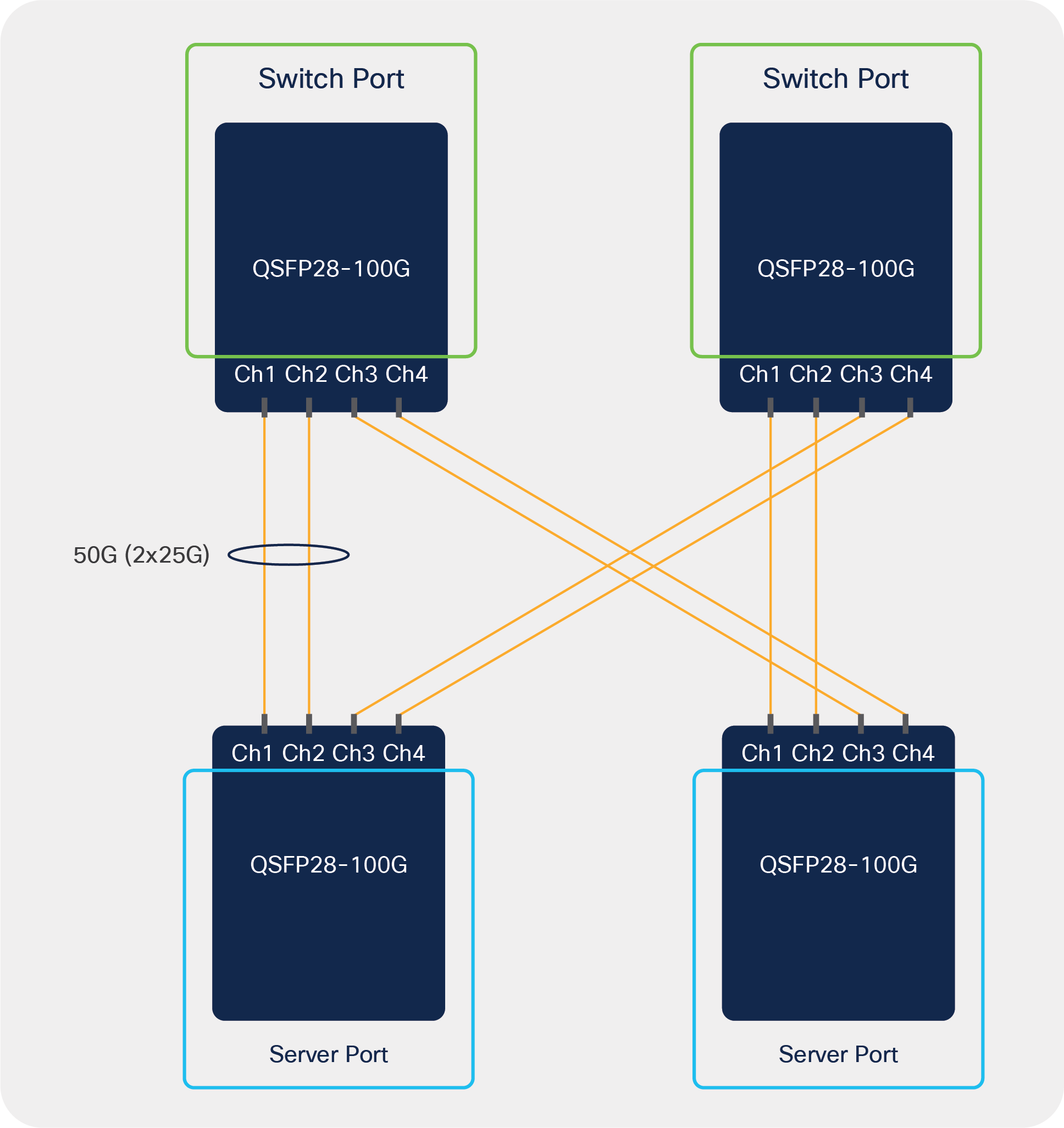 Breakout mode for communication applications is becoming more important as solutions demand increased density and lower cost, as well as other factors, such as interconnect and replacement strategies that need to be considered for the overall solution.

Cisco has a variety of breakout cables and transceivers. For more information see: www.cisco.com/go/optics.

The Cisco Optics-to-Device Compatibility Matrix is a great tool for determining if a transceiver supports breakout across a wide variety of Cisco platforms and software releases: https://tmgmatrix.cisco.com/.