The power injectors provide up to 15.4 W over the unused wire pairs of a Category 5 or better Ethernet cable, supplying enough power for a distance of 328 ft. (100 m) on the Cisco Aironet 1040, 1140, 1260, 2600, and 3500 Series Access Points. While it can also support the Cisco Aironet Series 3600 Access Points when modules are not being used, it is recommended to use the AIR-PWRINJ4= power injector instead for the 3600 series, as it has sufficient power to supply to the AP and any installed modules.

The Cisco Aironet Power Injector provides both power and data to a connected Cisco Aironet Access Point. The device serves the following functions:

The power injector is used with the following Cisco Aironet Series Access Points:

To avoid overheating and possible failure, do not stack or tie together (bundle) the power injector and its AC power cable.

Figure 1 shows the key features of the power injector. 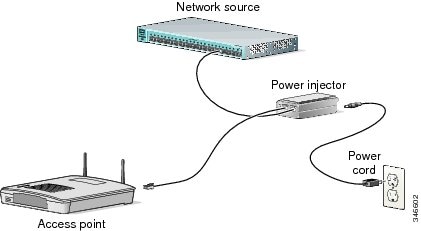 If any item is missing or damaged, contact your Cisco representative or reseller.

Use the power cord that shipped with your power injector to supply power for the injector. If you install the access point in an environmental air space such as above a suspended ceiling, check national and local safety codes to make sure that the Ethernet cable you connect to the unit meets applicable standards.

The AIR-PWRINJ5 is not plenum and should not be installed in the plenum airspace.

The maximum distance that is supported for in-line power is 328 ft. (100 m), including the length of the 6.5-ft. (2-m) Ethernet cable provided with the power injector.

Plug a Category-5 Ethernet cable into the port on the power injector labeled AP.

Plug the other end of the Ethernet cable into the WAN uplink Ethernet port of the access point.

Plug a Category-5 Ethernet cable into the port on the power injector labeled Switch.

Secure the power injector by mounting it to a vertical or horizontal surface using the mounting keyholes on the bottom of the unit.

You can mount the power injector to most vertical or horizontal surfaces using the mounting tabs on the top right and bottom left of the unit.

To mount the power injector to a vertical or horizontal surface using the mounting tabs, you will need the following parts and tools:

Using the holes in the power injector mounting tabs as a template, mark the locations on the surface where you will drill the holes for the wall anchors or screws.

If you are using #6 wall anchors, use a hammer to install them in the holes.

Insert the #6 screws through the mounting tabs and into the holes in the wall or surface.

Use a Phillips head screwdriver to drive the screws into the surface.

If the power injector is not securely fastened, continue making small adjustments until you are satisfied.

This table lists specifications for the power injectors:

The following information is for FCC compliance of Class B devices:

The equipment described in this manual generates and may radiate radio-frequency energy. If it is not installed in accordance with Cisco’s installation instructions, it may cause interference with radio and television reception. This equipment has been tested and found to comply with the limits for a Class B digital device in accordance with the specifications in part 15 of the FCC rules. These specifications are designed to provide reasonable protection against such interference in a residential installation. However, there is no guarantee that interference will not occur in a particular installation.

Modifying the equipment without Cisco’s written authorization may result in the equipment no longer complying with FCC requirements for Class A or Class B digital devices. In that event, your right to use the equipment may be limited by FCC regulations, and you may be required to correct any interference to radio or television communications at your own expense.

Modifications to this product not authorized by Cisco Systems, Inc. could void the FCC approval and negate your authority to operate the product.

Except where indicated, the Cisco Aironet Power Injector (AIR-PWRINJ5) meets the following standards: