This chapter describes how to configure dual-homing with a virtual port channel (vPC) to integrate Virtual Private LAN (VPLS) with the vPC functionality in active-standby mode and allow traffic from a customer edge (CE) device to be load balanced across both provider edge (PE) devices.

Your software release might not support all the features documented in this module. For the latest caveats and feature information, see the Bug Search Tool at https://tools.cisco.com/bugsearch/ and the release notes for your software release. To find information about the features documented in this module, and to see a list of the releases in which each feature is supported, see the “New and Changed Information” chapter or the Feature History table below.

Information about Layer 2 VPN VPLS Dual-Homing with a vPC

Virtual Private LAN Service (VPLS) provides a multipoint-to-multipoint Layer 2 service over a wide area network (WAN). VPLS is implemented by connecting all the nodes in a particular domain by using a full mesh of pseudowires (PWs).

The virtual port channel (vPC) functionality provides multichassis Ether channel support. Both the attachment circuit (AC) links in a vPC domain are in active mode, which increases the throughput of the network because all the interswitch links can be used to carry traffic.

In the VPLS integration with a vPC, a customer edge (CE) device is dual-homed to two provider edge (PE) devices. The PEs are part of the VPLS domain. One of the PEs in the VPLS domain is in Active state and forwards traffic, while the other PE is in Standby state. See the figure below.

Figure 31-1 VPLS Integration with a vPC 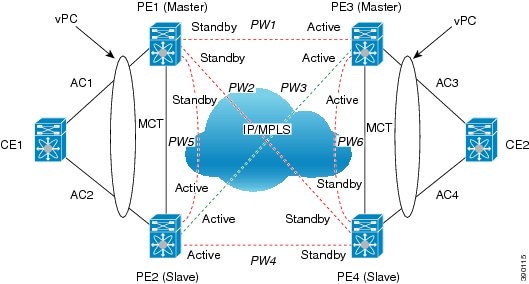 PE1 and PE2 belong to a vPC domain. PE3 and PE4 are part of another vPC domain. In addition to being part of their respective vPC domains, VPLS is configured on the PEs using a mesh of PWs.

The VPLS domain is configured in decoupled mode. As a result, the status of the AC links is not advertised to the PWs.

Overview of a vPC Peer Link

You can have only two switches as vPC peers; each switch can serve as a vPC peer to only one other vPC peer. The vPC peer switches can also have non-vPC links to other switches.

The two switches connected by the vPC peer link have certain identical operational and configuration parameters.

Validating the Configuration Between Switches

Cisco NX-OS software validates the configuration between primary (master) and secondary (slave) switches. When a Type-1 mismatch occurs between the primary and secondary switches for a particular VLAN, the VLAN is suspended on both the switches. When a consistency check fails, only the secondary virtual port channel (vPC) switch is brought down. The VLAN remains up on the primary switch and Type-1 configurations can be performed without traffic disruption.

The VPLS Active-Standby Support with a vPC feature provides network resiliency by protecting against port, link, and node failures. These failures can be categorized into the following scenarios:

These failure points are shown in the figure below. The figure below shows the frame flow if a port on the DHD or vPC peer or the attachment circuit (AC) link fails (scenario A, B, or C). The figure below shows the switch configured as the primary node fails (scenario D). 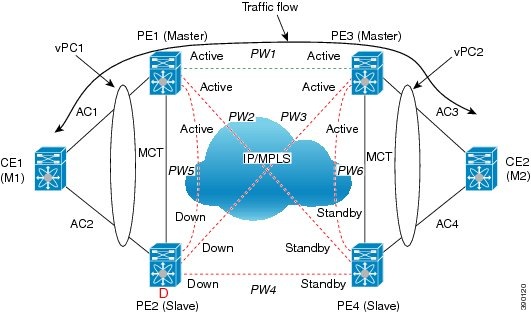 The figure below shows scenario E or the failure of vPC peer link, also known as multichassis trunk (MCT). 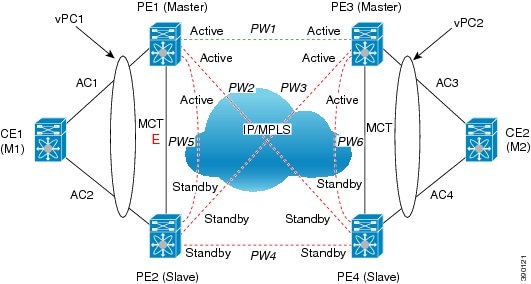 If MCT fails and both the nodes in the virtual port channel (vPC) are still up, the vPC master node keeps the AC link up and the vPC slave node brings its AC link down.

Because VPLS is configured in decoupled mode (the status of the AC link is not advertised to the core pseudowires), the Standby PE2 advertises the local status of Standby to all the core pseudowires (PWs) even though AC2 is down. Therefore, the traffic between vPC1 and vPC2 flows over PW1. The traffic between CE1 and PE1 flows only through the AC1 link.

The figure below shows the failure of core pseudowires (PWs) on the Active vPC node (scenario F). 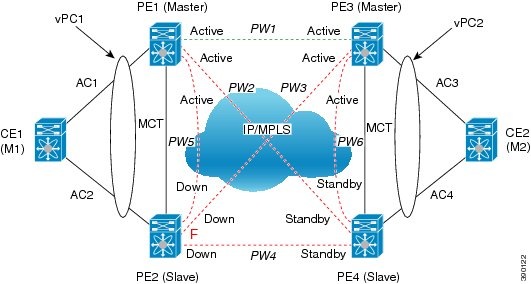 When all PWs in the core on the Active vPC node go down, the peer Standby vPC node changes its state to Active and advertises the local status of Active on all core PWs. PW 1 becomes Active.

When all core interfaces on a node go down, the PWs in the VPLS domain also go down.

Licensing for Layer 2 VPN VPLS Dual-Homing with a vPC

The VPLS Dual-Homing with a vPC feature is supported only on switch port links. Virtual port channel (vPC) is not supported on an Ethernet virtual circuit (EVC) port.

Table 31-1 lists the history for this feature.