This module identifies and describes concepts that are needed to understand, plan for, and implement a PKI.

Planning for a PKI

Before implementing a basic PKI, you should understand the following concepts:

What Is Cisco IOS XE PKI?

Certificate Enrollment: How It Works

Certificate Revocation: Why It Occurs

What Is Cisco IOS XE PKI?

A PKI is composed of the following entities:

Peers communicating on a secure network

At least one certification authority (CA) that grants and maintains certificates

Digital certificates, which contain information such as the certificate validity period, peer identity information, encryptions keys that are used for secure communications, and the signature of the issuing CA

PKI provides customers with a scalable, secure mechanism for distributing, managing, and revoking encryption and identity information in a secured data network. Every entity (a person or a device) participating in the secured communicated is enrolled in the PKI in a process where the entity generates an Rivest, Shamir, and Adelman (RSA) key pair (one private key and one public key) and has their identity validated by a trusted entity (also known as a CA or trustpoint).

Although you can plan for and set up your PKI in a number of different ways, Figure 1 shows the major components that make up a PKI and suggests an order in which each decision within a PKI can be made. Figure 1 is a suggested approach; you can choose to set up your PKI from a different perspective.

Figure 1 Deciding How to Set Up Your PKI 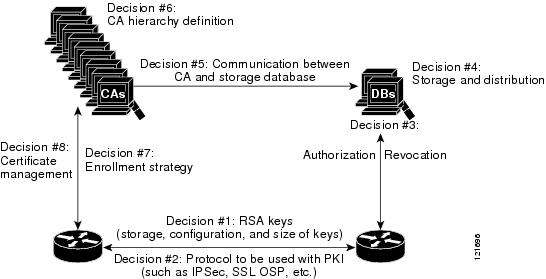 You can use a CA provided by a third-party CA vendor, or you can use an "internal" CA, which is the Cisco IOS XE Certificate Server.

PKI can be set up in a hierarchical framework to support multiple CAs. At the top of the hierarchy is a root CA, which holds a self-signed certificate. The trust within the entire hierarchy is derived from the RSA key pair of the root CA. The subordinate CAs within the hierarchy can be enrolled with either the root CA or with another subordinate CA. These enrollment options are how multiple tiers of CAs are configured. Within a hierarchical PKI, all enrolled peers, can validate the certificate of one another if the peers share a trusted root CA certificate or a common subordinate CA.

Figure 2 shows the enrollment relationships among CAs within a three-tiered hierarchy. 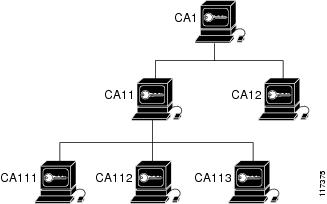 When to Use Multiple CAs

Multiple CAs provide users with added flexibility and reliability. For example, subordinate CAs can be placed in branch offices while the root CA is at the office headquarters. Also, different granting policies can be implemented per CA, so you can set up one CA to automatically grant certificate requests while another CA within the hierarchy requires each certificate request to be manually granted.

Scenarios in which at least a two-tier CA is recommended are as follows:

Large and very active networks in which a large number of certificates are revoked and reissued. A multiple tier CA helps to control the size of the CRLs.

When online enrollment protocols are used, the root CA can be kept offline with the exception of issuing subordinate CA certificates. This scenario provides added security for the root CA.

Certificate Enrollment: How It Works

The end host generates a certificate request and forwards it to the CA (or the RA, if applicable).

The CA receives the certificate enrollment request, and, depending on your network configuration, one of the following options occurs:

Manual intervention is required to approve the request.

The end host is configured to automatically request a certificate from the CA. Thus, operator intervention is no longer required at the time the enrollment request is sent to the CA server.

If you configure the end host to automatically request certificates from the CA, you should have an additional authorization mechanism.

After the request is approved, the CA signs the request with its private key and returns the completed certificate to the end host.

The end host writes the certificate to a storage area such as NVRAM.

SDP (also referred to as Trusted Transitive Introduction [TTI]) is a communication protocol that provides a bidirectional introduction between two end entities, such as a new network device and a Virtual Private Network (VPN). SDP involves the following three entities:

Introducer—A mutually trusted device that introduces the petitioner to the registrar. The introducer can be a device user, such as a system administrator.

Petitioner—A new device that is joined to the secure domain.

Registrar—A certificate server or other server that authorizes the petitioner.

SDP is implemented over a web browser in three phases—welcome, introduction, and completion. Each phase is shown to the user via a web page.

Certificate Revocation: Why It Occurs

After each participant has successfully enrolled in the PKI, the peers are ready to begin negotiations for a secure connection with each other. Thus, the peers present their certificates for validation followed by a revocation check. After the peer verifies that the other peer's certificate was issued by an authenticated CA, the CRL or Online Certificate Status Protocol (OCSP) server is checked to ensure that the certificate has not been revoked by the issuing CA. The certificate usually contains a certificate distribution point (CDP) in the form of a URL. Cisco IOS XE software uses the CDP to locate and retrieve the CRL. If the CDP server does not respond, the Cisco IOS XE software reports an error, which may result in the peer's certificate being rejected.

Planning for a PKI

Planning for a PKI requires evaluating the requirements and expected use for each of the PKI components shown in Figure 1. It is recommended that you (or the network administrator) thoroughly plan the PKI before beginning any PKI configuration.

Although there are a number of approaches to consider when planning the PKI, this document begins with peer-to-peer communication and proceeds as shown in Figure 1. However you or the network administrator choose to plan the PKI, understand that certain decisions influence other decisions within the PKI. For example, the enrollment and deployment strategy could influence the planned CA hierarchy. Thus, it is important to understand how each component functions within the PKI and how certain component options are dependent upon decisions made earlier in the planning process.

As suggested in Figure 1, you begin to configure a PKI by setting up and deploying RSA keys. For more information, see the "Deploying RSA Keys Within a PKI" module in the Cisco IOS XE Security Configuration Guide: Secure Connectivity.

certificates—Electronic documents that bind a user's or device's name to its public key. Certificates are commonly used to validate a digital signature.

CA—certification authority. Service responsible for managing certificate requests and issuing certificates to participating IPSec network devices. This service provides centralized key management for the participating devices and is explicitly trusted by the receiver to validate identities and to create digital certificates.

peer certificate—Certificate presented by a peer, which contains the peer's public key and is signed by the trustpoint CA.

PKI—public key infrastructure. System that manages encryption keys and identity information for components of a network that participate in secured communications.

RA—registration authority. Server that acts as a proxy for the CA so that CA functions can continue when the CA is offline. Although the RA is often part of the CA server, the RA could also be an additional application, requiring an additional device to run it.

RSA keys—Public key cryptographic system developed by Ron Rivest, Adi Shamir, and Leonard Adleman. An RSA key pair (a public and a private key) is required before you can obtain a certificate for your router.

All other trademarks mentioned in this document or website are the property of their respective owners. The use of the word partner does not imply a partnership relationship between Cisco and any other company. (1002R)