Cisco recommends that you have knowledge of Cisco Call Manager Web Administration.

The information in this document is based on the Cisco CallManager Server 11.0.

The RTMT which runs as a client-side application uses HTTPS and TCP in order to monitor system performance, device status, device discovery, Computer Telephony Integration (CTI) applications, and voice messaging ports. RTMT can be used to configure alerts for the cluster it is monitoring.

The system generates alert messages in order to notify the administrator when a predefined condition is met, such as when an activated service goes from up to down. The system can send alerts as e-mail/e-page.

RTMT, which supports alert defining, setting, and viewing, contains preconfigured and user-defined alerts. Although you can perform configuration tasks for both types, you cannot delete preconfigured alerts.

Unified RTMT displays both preconfigured alerts and custom alerts in Alert Central as shown in the image. Alerts in RTMT are classified as shown:

Linux servers have a tendency to ‘not clear’ the virtual memory usage over a period of time and it has been seen to accumulate and hence those alerts.

Linux operates a little differently as an operating system.

Once memory is allocated to a process it will not be taken back by the processor unless some other process requests for memory more than the available memory.

A request for an increase in the threshold for the alarm in the higher versions of call manager has been documented in the defect; https://bst.cloudapps.cisco.com/bugsearch/bug/CSCuq75767/?reffering_site=dumpcr

Also, these may be throw up RTMT alerts caused by a build-up of temp files, a reboot of the server is recommended to clear out any unnecessary temp files.

On running show status on the CLI of a CUCM server, a value that specifies the occupied and free percentage of logging partition in the CUCM disk space is shown. Also known as common partition, these values specify the space occupied by the logs/traces and the CDR files in the server, which even though are harmless, might cause issues in install/upgrade procedure due to lack of space over time. These alerts serve as a warning to the administrator to clear those logs which might have accumulated over time in the cluster/server.

LogPartitionLowWaterMarkExceeded: This alert is generated when the filled space reaches the threshold values configured for the alert. This alert serves as a pre-check indicator for the disk usage.

Best practice would be to purge the logs manually as soon as LogPartitionLowWaterMarkExceeded alert is received.

Steps to do so are:

Select LogPartitionHighWaterMarkExceeded, note its value and change its threshold value to 60%.

Select LogPartitionLowWaterMarkExceeded, note its value and change its threshold value to 50%.

Give it 15 to 20 minutes to clear the space in common partition. You can monitor the decrease in disk usage with the command show status from CLI.

That would bring down the common partition.

From the CLI of the concerned server, these outputs will lend some insight.

It is recommended to observe if the CPU spike happens at a specific time or randomly. If it occurs randomly then the required detailed CUCM traces as well as RisDC perfmon logs to check what is triggering the spike in CPU. If the alerts are happening at a specific time of the day then it could be due to some scheduled activity like Disaster Recovery System (DRS) backup, CDR Load etc.

Also, on the basis of information about which process occupies the most CPU, specific logs are taken for further investigation. For eg. if the culprit is Tomcat, then the Tomcat related logs are needed. 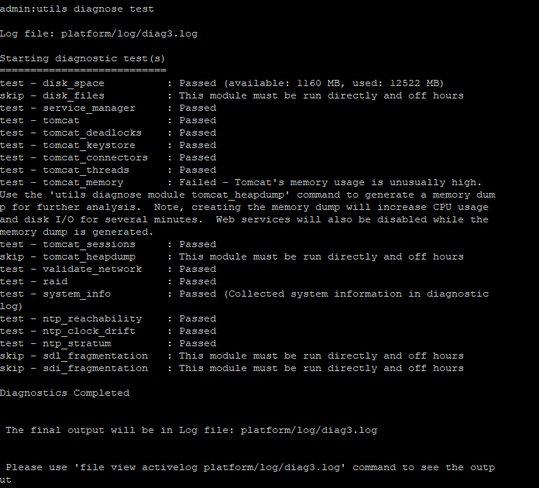