When Nexus 9000 switches are configured as VXLAN Leaf Switches also known as VXLAN Tunnel End Points (VTEP) in virtual Port Channel (vPC) domain, you must have a backup Layer 3 Routing adjacency in between them over the vPC peer-link with the use of an interface vlan. This VLAN must be local to the switches, not stretched across the VXLAN fabric and belong to the Default VRF (Global Routing Table).

Ensure the system nve infra-vlans command is in place on Nexus 9000 platforms with CloudScale ASIC (Tahoe) like the Nexus 9300 Switches which end in EX, FX and FX2 to specify the VLAN can act as an uplink and properly forward the frames with VXLAN encapsulation over the vPC peer-link.

Note: This document makes use of the terms Leaf Switch, VTEP and ToR interchangeably.

The next use cases show when it is required to configure the system nve infra-vlans command. In all of them, the allocated VLAN 777 needs to be defined as part of the system nve infra-vlans command and be used to instantiate a Layer 3 Routing backup adjacency over the vPC peer-link. This VLAN 777 needs to be part of the Default VRF (Global Routing Table).

Orphan port on a Leaf Switch in vPC

This use case depicts an end-host inside the fabric (Host-A) connected to a single Cisco Nexus 9000 VXLAN Leaf Switch part of a vPC domain. This is known as an Orphan Port connection. As part of Routing, traffic generated by an end-host connected to any other Leaf Switch in the fabric is destined, in the underlay, to the NVE Anycast IP address (10.12.12.12) own simultaneously by both Leaf Switches in vPC (Switch Leaf A and Switch Leaf B). This is to take advantage of all Leaf-to-Spine uplinks with the use of Equal Cost Multi-Path (ECMP) Routing. In this scenario, after passing through the Spine, VXLAN frames destined to Host-A may hash to Leaf B which has no direct connection to Host-A. The system nve infra-vlans and backup Routing is required for the traffic to traverse the vPC peer-link. 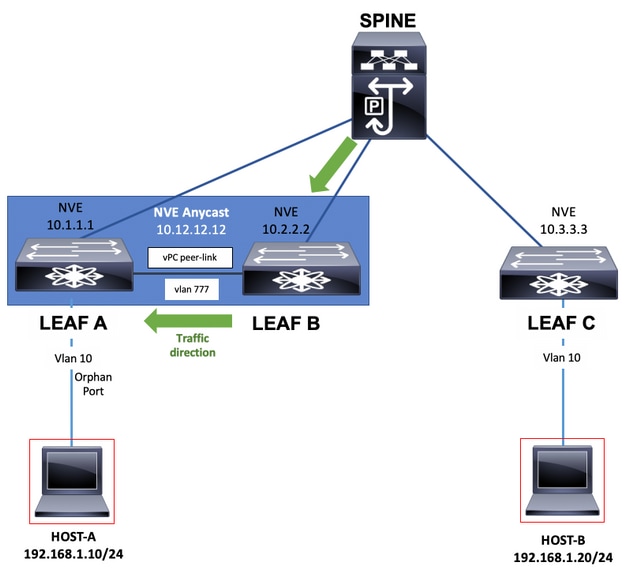 Failure of uplink on a Leaf Switch in vPC

In this use case, the end-host (Host-A) inside the fabric is dual homed to both Cisco Nexus 9000 VXLAN Leaf Switches in a vPC domain. However, in case of failure of all the uplinks on any of the Leaf switches in vPC which can completely isolate it from the Spine switches, the system nve infra-vlans and backup Routing is required for the traffic to traverse the vPC peer-link which is now the only possible path towards the Spine. For instance, the diagram shows Host-A's traffic has hashed its frame to the isolated switch Leaf A. The frame now has to traverse the vPC peer-link. 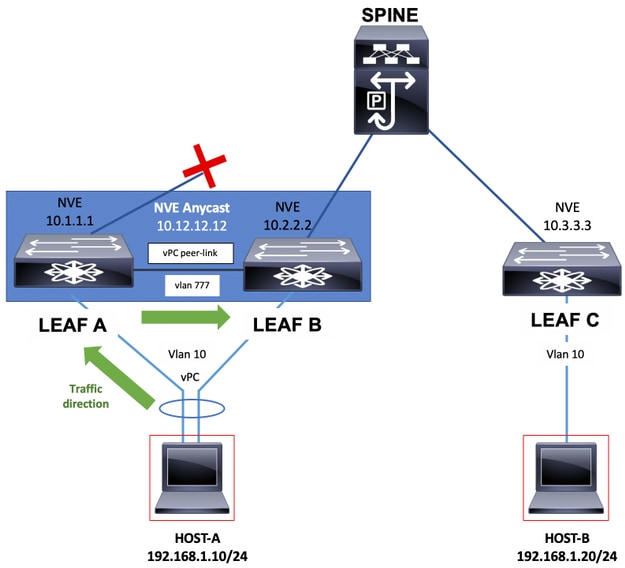 Border Leaf switches which provide connectivity out of the VXLAN fabric by the exchange of network prefixes with External Routers, can be in vPC.

Border Leaf switches with connectivity to the WAN could end up single homed in the case of link failure. In such event the system nve infra-vlans and backup Routing is required for the traffic to traverse the vPC peer-link as shown in the next diagram.

Note: For the next examples, additionally to the VLAN in Global Routing Table, there must be a VLAN part of the Tenant-VRF which base the exchange of network prefixes with the use of Static Routes or a Routing Protocol between the Border Leaf switches over the vPC peer-link. This is required in order to populate the Tenant-VRF Routing Table. 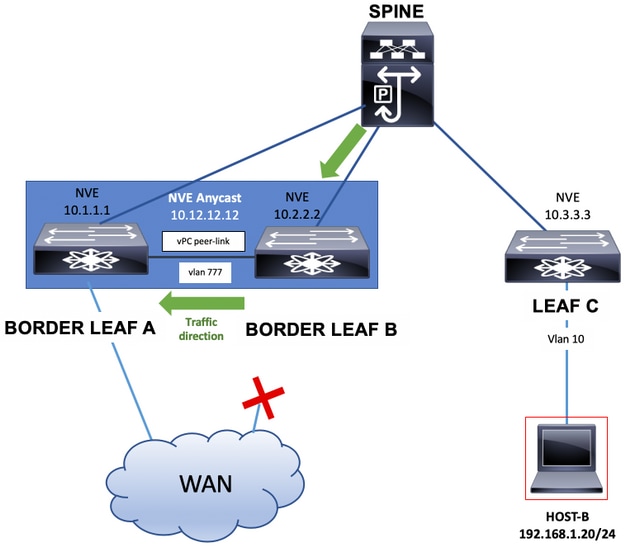 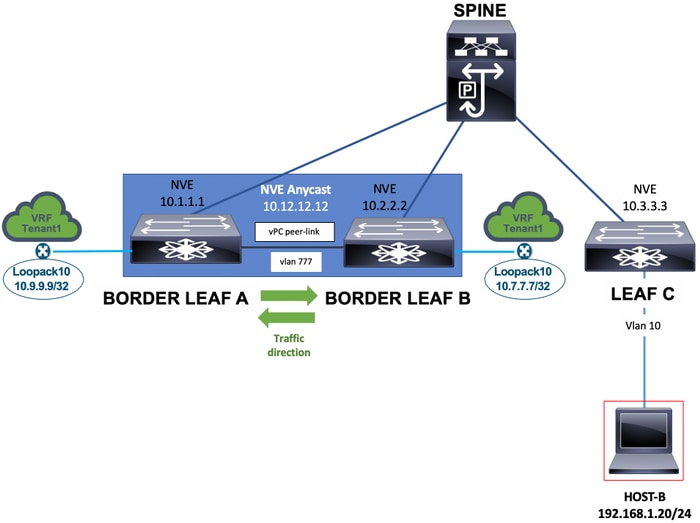 Finally, External Routers single home connected to Border Leaf switches can advertise network prefixes which can be required to have the vPC peer-link in the path of the network traffic as seen in the next diagram. 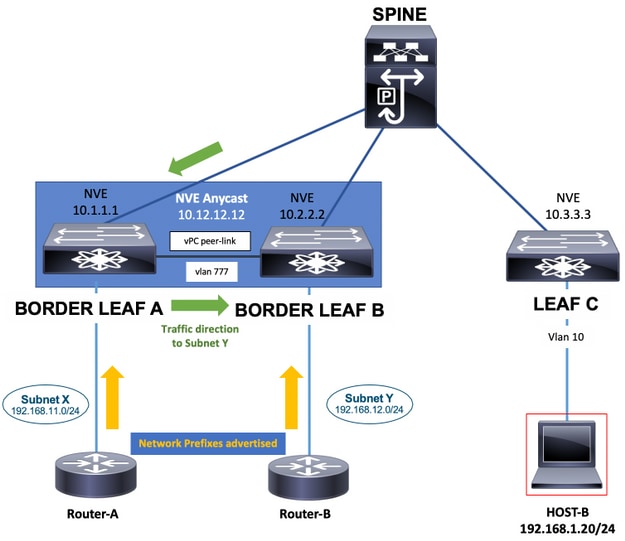 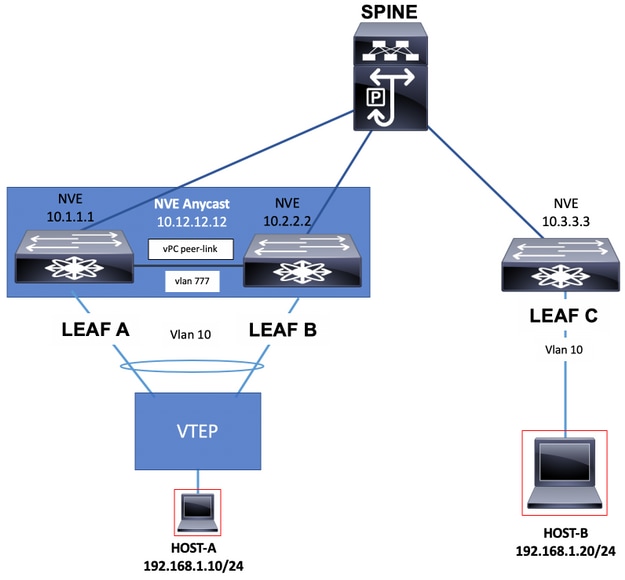 In this scenario, LEAF A and LEAF B are VTEPs in vPC.

Vlan 777 has been chosen to participate in the underlay Routing Protocol which in this case is Open Shortest Path First (OSPF).

On each LEAF A and LEAF B switches, OSPF has formed an adjacency with the SPINE switch over the uplink and between them over the vPC peer-link.

Note: No vn-segment command is configured under vlan 777 configuration section. This indicates the vlan is not stretched across the VXLAN fabric and it is local in the Switches.

Add the system nve infra-vlans command in global configuration mode and chose vlan 777 since it is the vlan used for the underlay OSPF adjacency.

Note: The system nve infra-vlans is only required on Nexus 9000 with CloudScale ASIC (Tahoe) like the Nexus 9300 which ends in EX, FX and FX2. 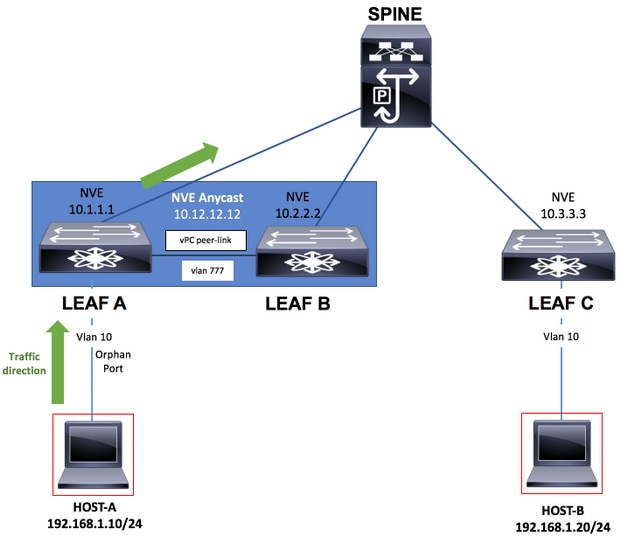 In the event that LEAF A switch suffers from an uplink failure and it no longer connects directly to the SPINE switch, reachability can still be accomplished with the infra-vlan over the vPC peer-link used as a backup uplink towards the SPINE switch. 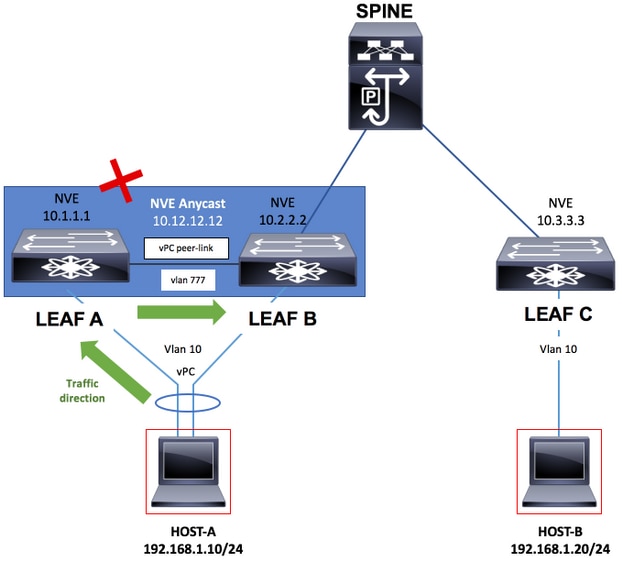