This document provides the procedures to create and maintain the Cisco Catalyst 3750 Switch Stacks with the Cisco StackWise feature.

The information in this document is based on the Cisco Catalyst 3750 Series Switches.

Refer to the for more information on document conventions.

Cisco Catalyst switches can be stacked with two different features.

Use only approved cables, and connect only to similar Cisco equipment. Equipment can be damaged if connected to other unapproved Cisco cables or equipment.

This illustration shows an example of a stack of Catalyst 3750 switches that provides full bandwidth and redundant StackWise cable connections:

When a cable fails at a single place, the stack will run with the half bandwidth connection.

In order to find the stack-ports through which the switches are connected to the stack, issue the show switch stack-ports command.

Alternatively, in order to find the nearby switch on each port, issue the show switch neighbors command.

This illustration shows a stack of Cisco EtherSwitch service modules and Catalyst 3750 switches that provides full bandwidth and redundant connections: 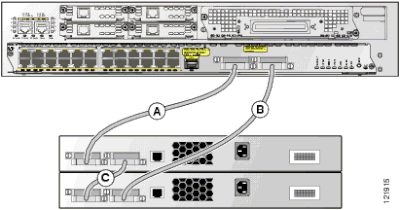 This illustration shows an example of a stack of Catalyst 3750 switches with incomplete StackWise cable connections. This stack provides only half bandwidth and does not have redundant connections:

When a cable fails at a single place, the stack will be partitioned into two stacks.

In this section, you are presented with the information needed to configure the StackWise stacks described in this document.

How do you manually change the member number?

Cisco recommends that you assign the highest priority value to the switch that you prefer to be the stack master. This ensures that the switch is re-elected as stack master if a re-election occurs.

How do you change the priority value?

Even though the priority value applies immediately to the member, it will not affect the status of the current stack master. New priority value will play a role in the next stack-master election.

How is the stack master elected?

These rules have been defined to determine which unit within a stack is chosen as the master. When switches are added or stacks are merged, the master will be chosen based on these rules, in the order specified:

Note: Data forwarding will not be affected within the stack master election.

When is the stack master elected?

1Within these events, the current stack master has a greater chance to get re-elected.

The Cisco Catalyst 3750 series switches use Switch Database Management (SDM) templates to optimize the system resources for specific features dependent on how the switch is used in the network. There are two versions of the SDM templates: Desktop and Aggregator. The 3750-12S switch alone supports both templates. All other model switches of the 3750 series support only the Desktop version.

When a Cisco Catalyst 3750 switch stack consists of 3750-12S and other models, make sure to use only the Desktop SDM template. This is an output from the show switch command when an SDM mismatch exists:

To change the SDM template on a 3750-12S to Desktop version, complete these steps:

For more information on the SDM templates, refer to Configuring SDM Templates.

Software compatibility between the stack members is determined by the Stack Protocol Version number. To view the stack protocol version of your switch stack, you can issue the show platform stack manager all command.

Switches with the same major version number but with a different minor version number as the stack master are considered partially compatible. When connected to a switch stack, a partially compatible switch enters version-mismatch (VM) mode and cannot join the stack as a fully functional member. The software detects the mismatched software and tries to upgrade (or downgrade) the switch in VM mode with the switch stack image or with a tar file image from the switch stack flash memory. The software uses the automatic upgrade (auto-upgrade) and the automatic advise (auto-advise) features.

The auto-upgrade occurs if the software release that runs on the stack master is compatible with the switch in VM mode and the tar file of the current image is available with any of the stack members. If tar file of the current image is not available, the auto-advise feature will recommend that a compatible image be downloaded with the required commands. The auto-upgrade and auto-advise features do not work if the switch master and switch in VM mode run different feature sets/packaging levels (IP services and IP base), but, from Cisco IOS Software Release 12.2(35)SE, auto-upgrade does support upgrades between cryptographic and non-cryptographic images of the same packaging level.

Note: If the auto upgrade does not work on the switch that shows the version mismatch error, use TFTP to manually upgrade the switch.

This example shows how a switch stack is created from two stand-alone stacks.

This example shows how two switch stacks merge to form a stack.

Tips to Add a Switch as a Slave to the Stack

To add a switch, as a slave, to a stack, complete these steps:

Note: Make sure the switch that you add into the stack has the same IOS version as the switches in the stack. Refer to to upgrade the IOS in a catalyst 3750 switch.

Tips to Add a Switch as a Master to the Stack

To add a switch, as a master, to a stack, complete these steps:

Note: Make sure the switch you add into the stack has the same IOS version as the switches in the stack. Refer to Catalyst 3750 Software Upgrade in a Stack Configuration with Use of the Command-Line Interface to upgrade the IOS in a catalyst 3750 switch.

Remove a Member from the Stack

Complete these steps to remove a member from the stack:

Add a Provisioned Switch to a Switch Stack

Remove a Provisioned Switch from the Stack

In this example, switch number 2 was removed from a stack. The model number of the switch is WS-C3750-48TS:

Note: In order to avoid the receipt of an error message, you must remove the specified switch from the switch stack before you use the no form of this command to delete a provisioned configuration.