Configure STP Settings on a Switch through the CLI

Configure STP Settings on a Switch through the CLI

Spanning Tree Protocol (STP) protects Layer 2 broadcast domains from broadcast storms by selectively setting links to standby mode to prevent loops. In standby mode, these links temporarily stop transferring user data. After the topology changes, so that the data transfer is made possible, the links are automatically re-activated.

Network Loops occur when there are alternate routes between hosts. These loops cause Layer 2 switches to forward traffic across the network infinitely, reducing network efficiency. STP provides a unique path between endpoints on a network. These paths eliminate the possibility of network loops. STP is typically configured when there are redundant links to a host to prevent network loop.

This article aims to show you how to configure STP on a switch through the CLI.

Note: The commands may vary depending on the exact model of your switch. In this example, the SG350X-48MP switch is accessed through Telnet.

Step 3. To enable the STP functionality on the switch, enter the following:

Step 4. To configure the STP protocol to run on the switch, enter the following:

Note: In this example, rstp is used.

Step 6. To configure the switch STP priority, which is used to determine which bridge is selected as the root bridge, enter the following:

Step 7. (Optional) To configure how often the switch broadcasts Hello messages to other devices, enter the following:

Note: In this example, the default Hello time of 2 seconds is used.

Note: In this example, the default value of 20 seconds is used.

Step 9. (Optional) To configure the STP bridge forward time, which is the amount of time a port remains in the listening and learning states before entering the forwarding state, enter the following:

Note: In this example, the default value of 15 seconds is used.

Step 11. Enter the exit command to go back to the Privileged EXEC mode: 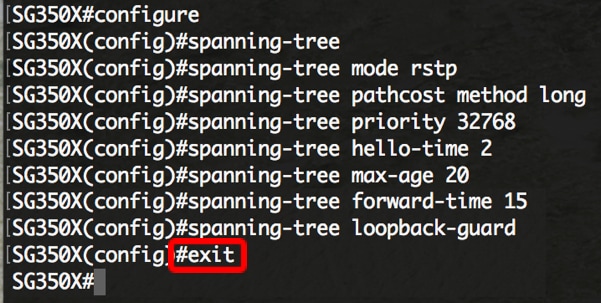 Step 12. (Optional) To display the STP settings on the switch, enter the following: 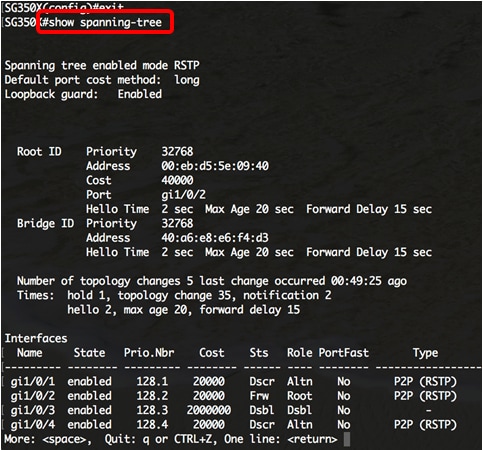 Step 13. (Optional) In the Privileged EXEC mode of the switch, save the configured settings to the startup configuration file by entering the following:

Step 14. (Optional) Press Y for Yes or N for No on your keyboard once the Overwrite file [startup-config]… prompt appears.

You should now have successfully configured the STP settings on your switch through the CLI.