Note: Preprocessor rules have a Generator ID (GID) other than '1' or '3' (i.e. 129, 119, 124). More information about the GID to preprocessor mappings can be found in the FMC Configuration Guides.

Using the "trace" Tool to Find Preprocessor Drops (FTD Only)

The system support trace tool can be used to detect drops performed at the preprocessor level.

In the example below, the TCP normalization preprocessor detected an anomaly. As a result, the traffic is dropped by rule 129:14, which looks for missing timestamps within a TCP stream.

On the Firepower Management Center (FMC) UI, the NAP can be viewed under Policies > Access Control > Intrusion. Then, click on the Network Analysis Policy option in the top right, after which you can view the NAPs, create new ones and edit existing ones. 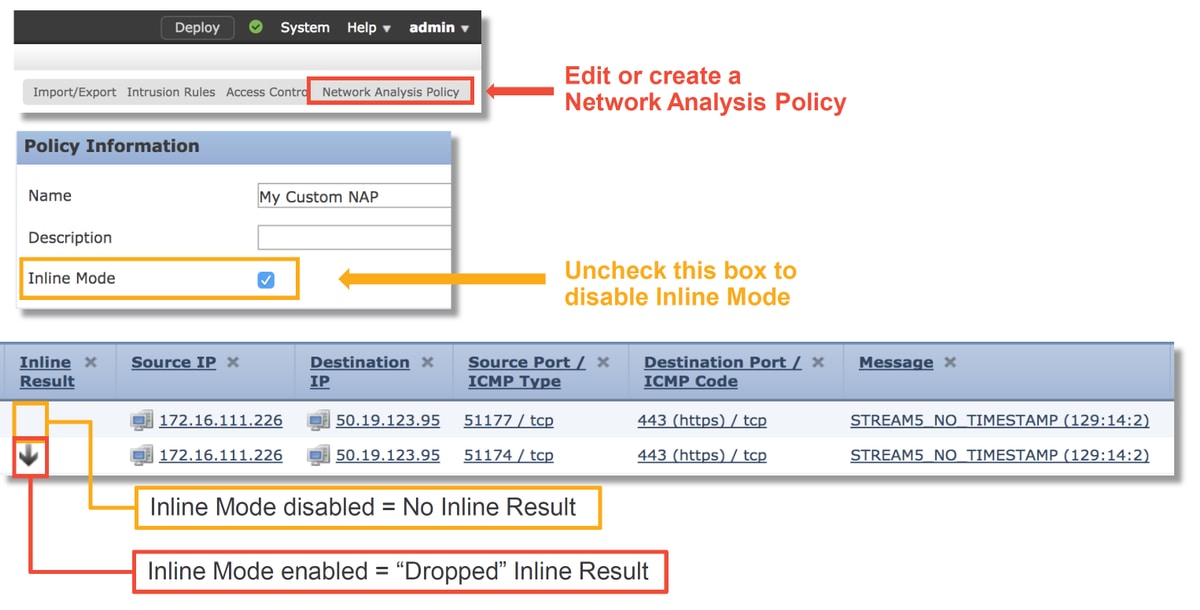 As seen in the illustration above, the NAPs contain an "Inline Mode" feature, which is the equivalent of the "Drop When Inline" option in the Intrusion Policy. A quick mitigation step for preventing the NAP from dropping traffic would be to uncheck Inline Mode. The Intrusion Events generated by the NAP don't display anything in the Inline Result tab with Inline Mode disabled.

Within the NAP, you can view the current settings. This includes the total enabled preprocessors, followed by the 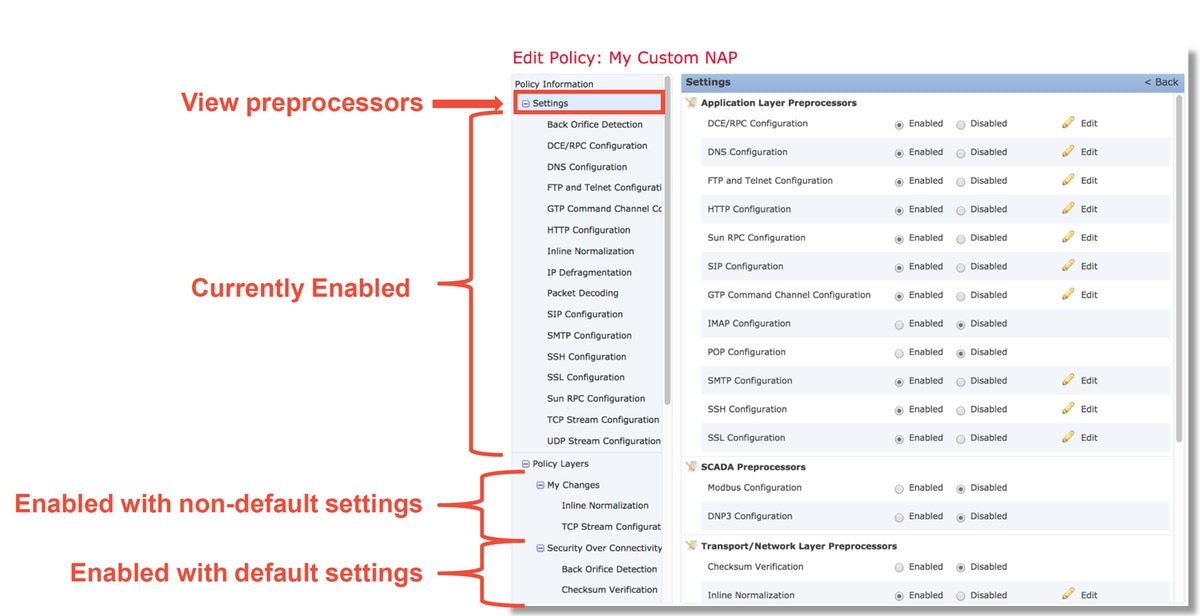 NAP Settings That Can Cause Silent Drops

In the example mentioned in the trace section, the rule TCP Stream Configuration rule 129:14 is dropping traffic. This is determined by looking at the system support trace output. However, if the said rule is not enabled within the respective Intrusion Policy, no Intrusion Events are sent to the FMC.

The reason why this happens is due to a setting within the Inline Normalization preprocessor called Block Unresolvable TCP Header Anomalies. This option basically allows Snort to perform a block action when certain GID 129 rules detect anomalies in the TCP stream.

If Block Unresolvable TCP Header Anomalies is enabled, it is recommended to turn on the GID 129 rules per the illustration below. 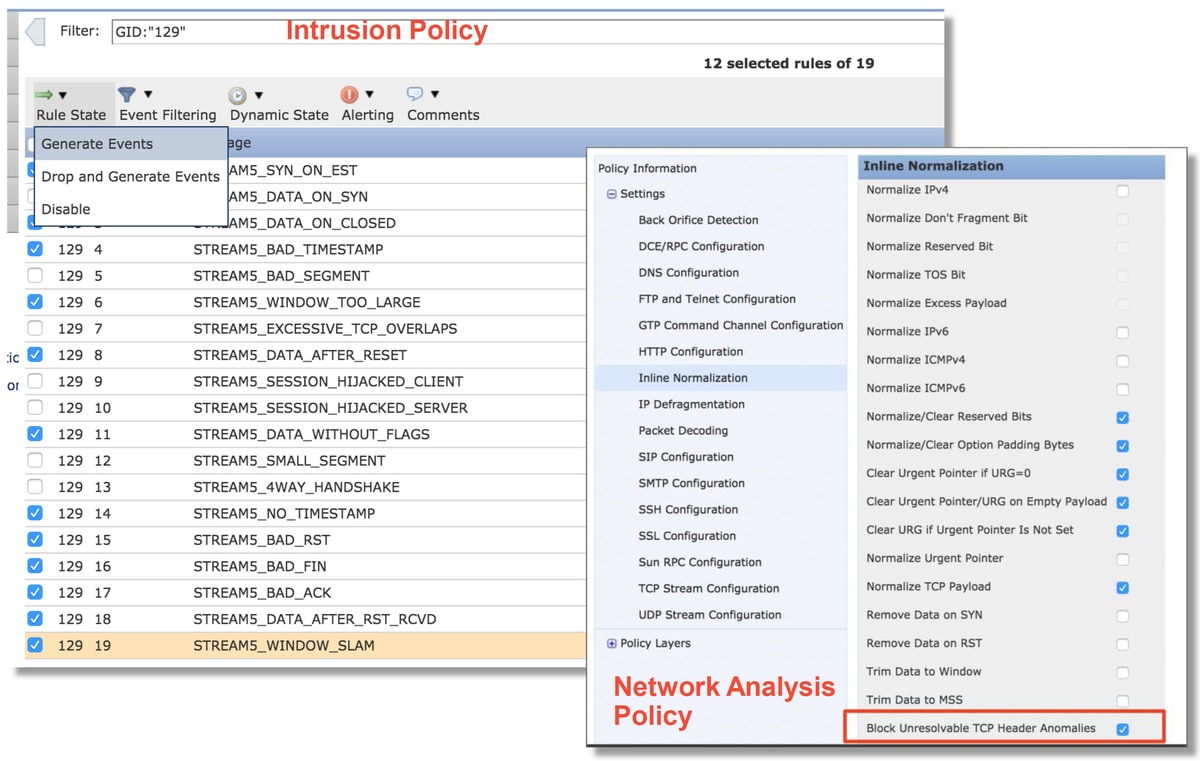 Turning on the GID 129 rules causes Intrusion Events to be sent to the FMC when they take action on the traffic. However, as long as the Block Unresolvable TCP Header Anomalies is enabled, it can still drop traffic even if the Rule State in the Intrusion Policy is set to only Generate Events. This behavior is explained in the FMC Configuration Guides. 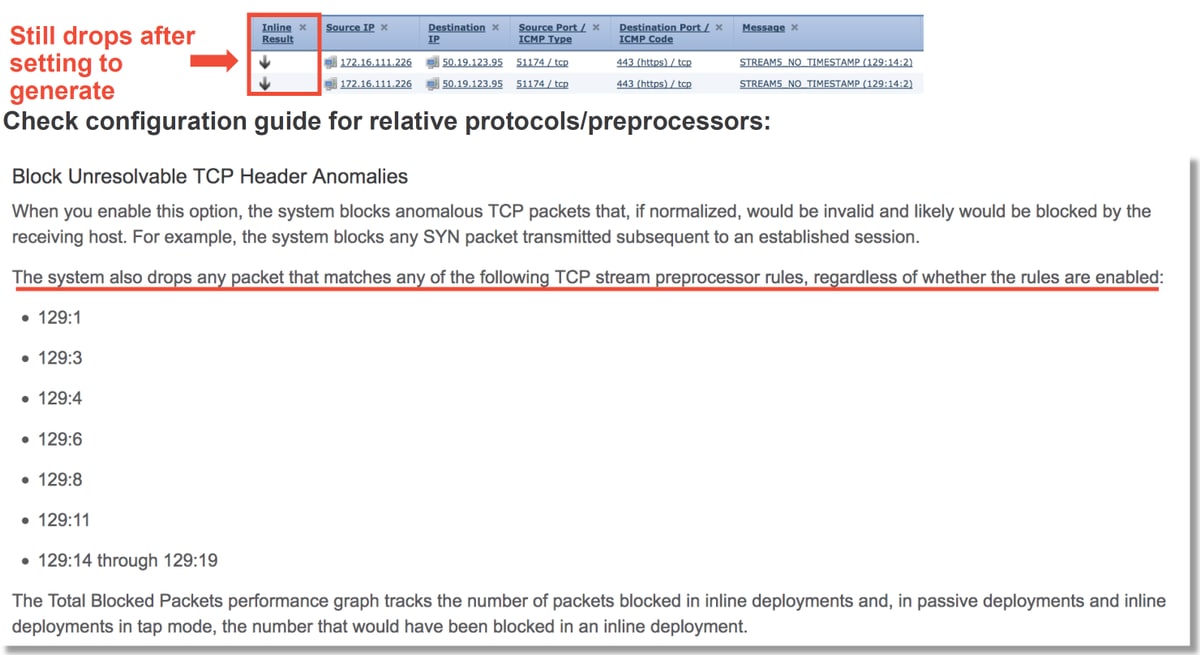 The above documentation can be found in this article (for version 6.4, which is the most recent version at the time of this article posting).

Another layer of complexity is added to the behavior of the preprocessor in that certain settings can be enabled on the backend, without being reflected in the FMC. These are some possible reasons.

Before looking at the backend configuration, note that the Snort keywords, which are used in the backend Snort configuration files, can be seen by hovering over a specific setting within the NAP. Please refer to the illustration below.

The Block Unresolvable TCP Header Anomalies option in the NAP tab translates to the block keyword on the backend. With that information in mind, the backend configuration can be checked from the expert shell.

If certain hosts are triggering preprocessor events, a custom NAP can be used to inspect traffic to or from said hosts. Within the custom NAP, the settings which are causing issues can be disabled.

These are the steps for implementing a targeted NAP.

Checking for false positives in Intrusion Events for preprocessor rules is quite different than that of the Snort rules used for rule evaluation  (which contain a GID of 1 and 3).

In order to perform a false positive analysis for preprocessor rule events, a full session capture is necessary to look for anomalies within the TCP stream.

In the example below, false positive analysis is being performed on rule 129:14, which is shown to be dropping traffic in the examples above. Since 129:14 is looking for TCP streams in which timestamps are missing, you can clearly see why the rule was triggered per the packet capture analysis illustrated below.

To quickly mitigate possible issues with the NAP, the following steps can be performed. 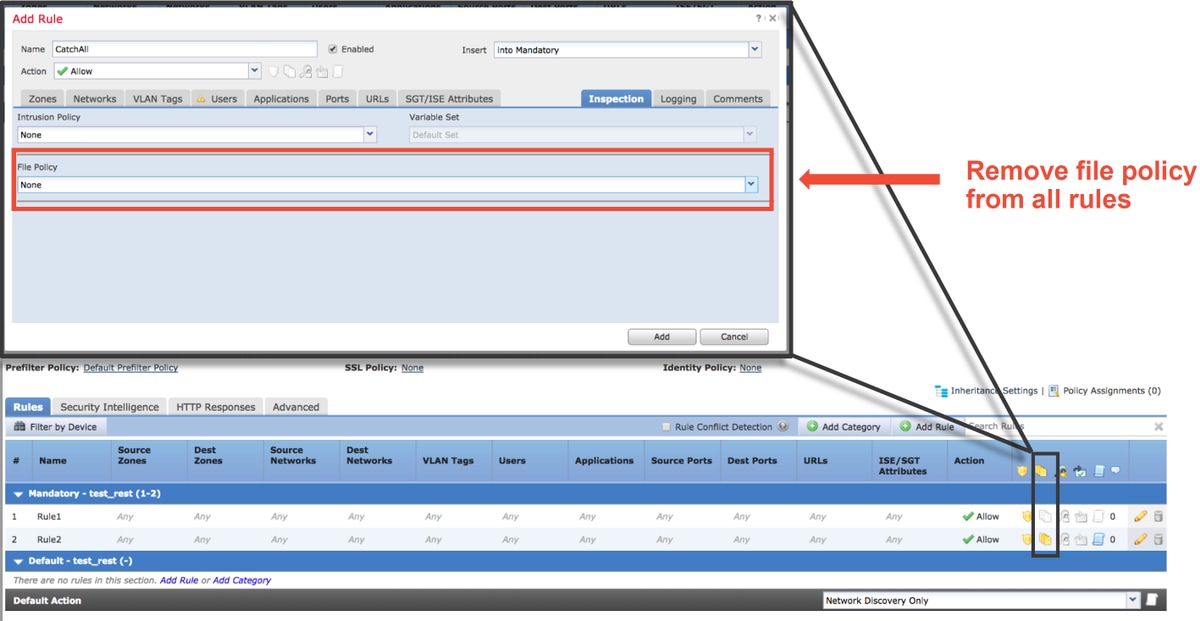 You can check the documentation for each preprocessor to get a better idea of what each option does, which is helpful when troubleshooting a specific preprocessor.