Cisco recommends that you have knowledge of the Cisco Firepower system and Snort.

The information in this document is based on the Cisco FireSIGHT Management Center and Firepower appliances.

When you apply an intrusion policy with the inline normalization preprocessor enabled, the Firepower device tests these two conditions in order to ensure that you use an inline deployment:

Therefore, in addition to the enablement and configuration of the inline normalization preprocessor, you must also ensure that these requirements be met, or the preprocessor will not normalize traffic:

Most of the preprocessor settings are configured in the NAP for Versions 5.4 and later. Complete these steps in order to enable inline normalization in the NAP:

Complete these steps in order to enable inline normalization in an intrusion policy: 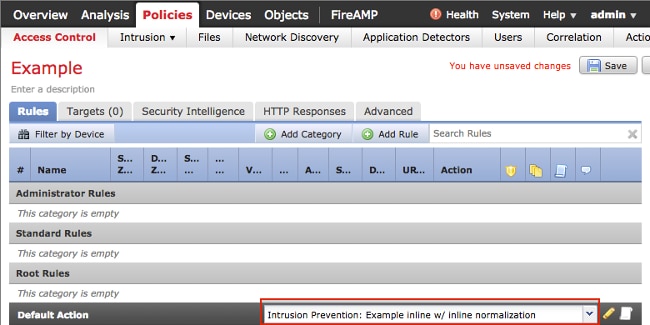 You can configure the inline normalization preprocessor in order to normalize IPv4, IPv6, Internet Control Message Protocol Version 4 (ICMPv4), ICMPv6, and TCP traffic in any combination. The normalization of each protocol occurs automatically when that protocol normalization is enabled. This feature normalizes traffic immediately after packet decoding and before any other Snort function is processed in order to minimize TCP evasion efforts. This ensures that the packets reaching the IPS are the same as those that are passed on to the victim. Snort drops the traffic on the packet that completes the attack before the attack reaches its victim.

When you enable Normalize TCP, the traffic that matches these conditions is also dropped: