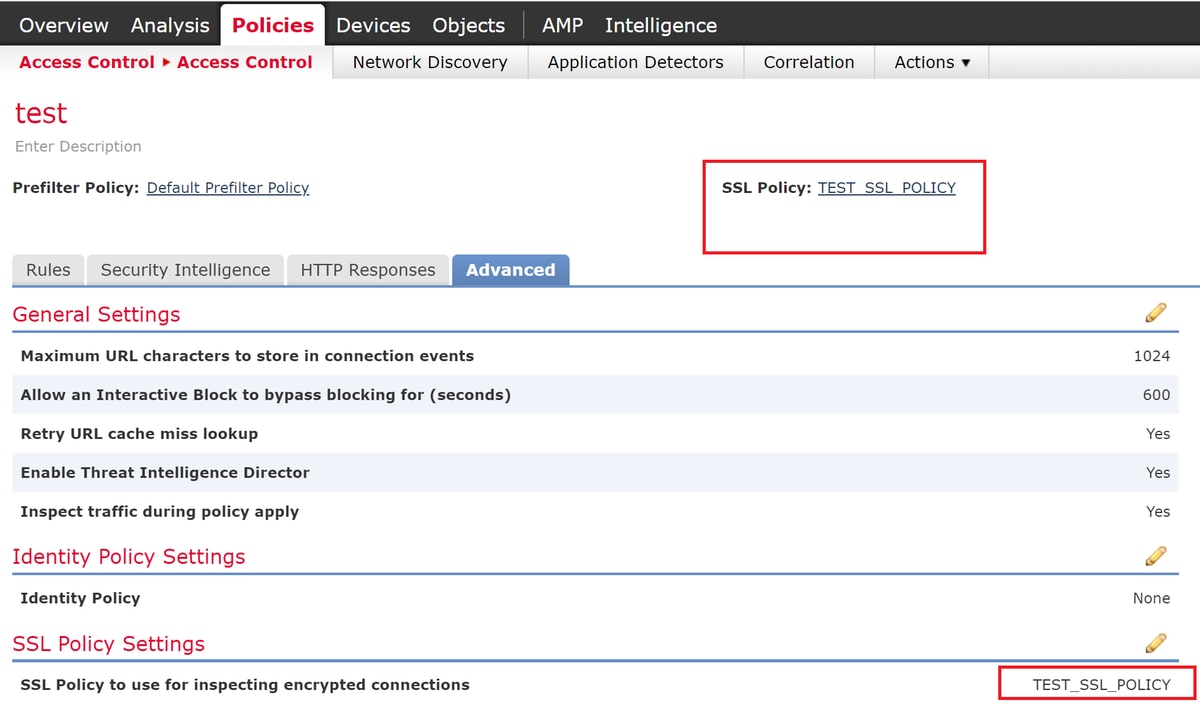 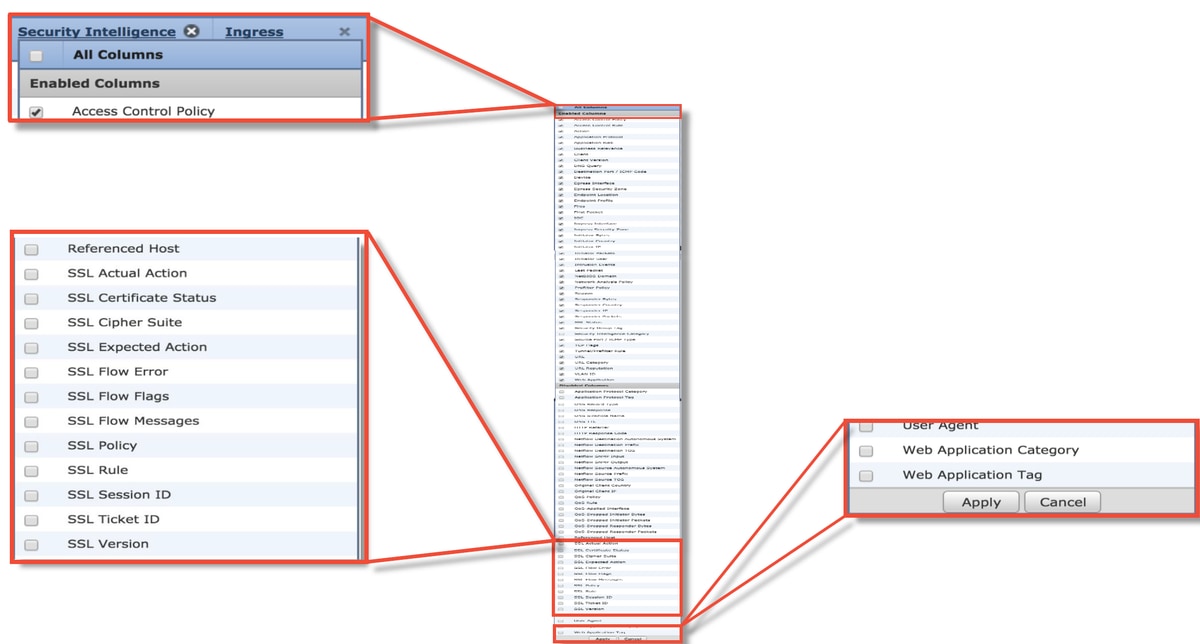 Specific steps can be followed to help understand why SSL Policy may be dropping traffic that is expected to be allowed.

If the SSL Policy is suspected of causing traffic issues, the first place to check is the Connection Events section (under Analysis > Connections > Events) after enabling all the SSL fields, as outlined above.

If SSL Policy is blocking traffic, the Reason field displays "SSL Block". The SSL Flow Error column has useful information about why the block occurred. The other SSL fields have information about SSL data that Firepower detected in the flow.

This data can be provided to the Cisco Technical Assistance Center (TAC) when opening a case for SSL Policy. In order to easily export this information, Report Designer button at the top right corner can be used.

If this button is clicked from the Connection Events section, the filters and time window options are copied to the report template automatically.

Make sure all mentioned SSL Fields are added at the 'Field' section.

Click on Generate to create a Report on PDF or CSV formats.

If the Connection Events do not contain enough information about the flow, SSL debugging can be run on the Firepower Command Line Interface (CLI).

Note: All of the debug content below is based on the SSL decryption that happens in software on the x86 architecture. This content does not include debugs from SSL hardware offload features that were added in version 6.2.3 and on, which are different.

Note: On the Firepower 9300 and 4100 platforms, the shell in question can be accessed via the following commands:

The system support ssl-debug debug_policy_all command can be run to generate debugging information for every flow processed by the SSL Policy.

Caution: The snort process must be restarted before and after running the SSL debug, which can cause a few packets to be dropped depending on the snort-down policies and deployment used. TCP traffic will be retransmitted, but UDP traffic can be negatively affected if the applications passing through the firewall don't tolerate minimum packet loss.

Warning: Do not forget to turn off debugging after the necessary data is collected with the system suport ssl-debug-reset command.

There will be a file written for each snort process running on the Firepower device. The location of the files will be: 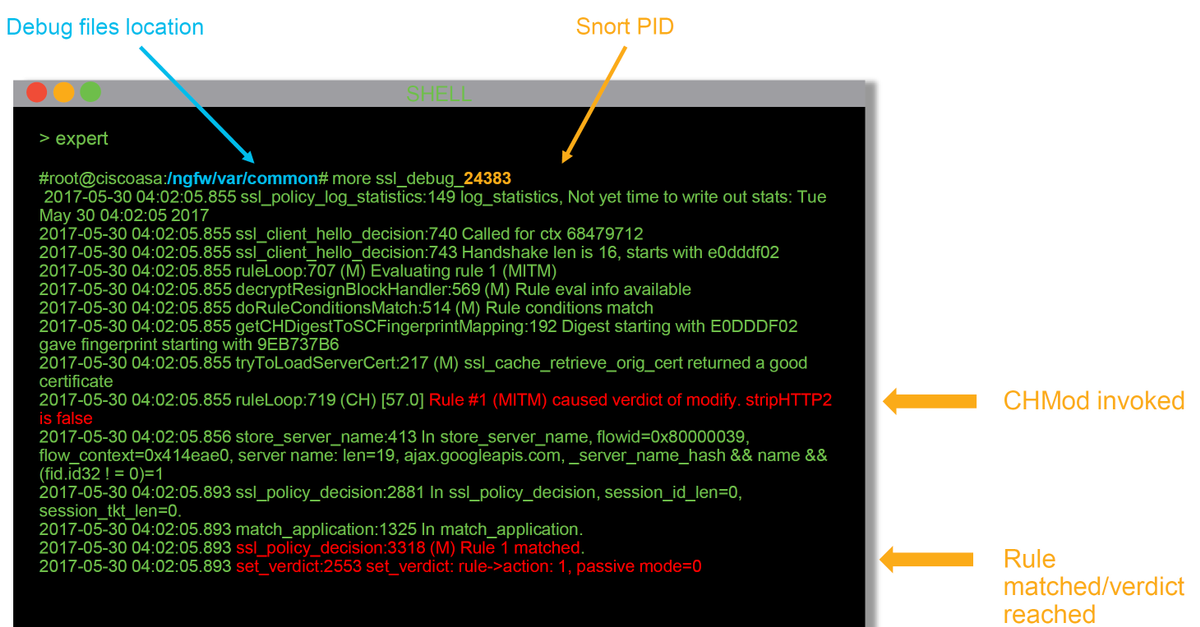 These are some of the helpful fields in the debug logs.

Note: If there is an error with decryption which occurs after Firepower begins decrypting, the traffic must be dropped since the firewall have already modified/man-in-the-middled the session, so it is not possible for the client and server to resume communication as they have different TCP stacks as well as different encryption keys used in the flow.

The debug files can be copied off of the Firepower device from the > prompt using the directions in this article.

Alternatively, there is an option on the FMC in Firepower version 6.2.0 and greater. To access this UI utility on the FMC, navigate to Devices > Device Management. Then, click on the

icon next to the device in question, followed by Advanced Troubleshooting > File Download. You can then enter the name of a file in question and click Download.

It is possible to collect an unencrypted packet capture for the sessions which get decrypted by Firepower. The command is system support debug-DAQ debug_daq_write_pcap

Caution: The snort process must be restarted before generating the decrypted packet capture, which can cause a few packets to be dropped. Stateful protocols such as TCP traffic are retransmitted, but other traffic, such as UDP, can be negatively affected. 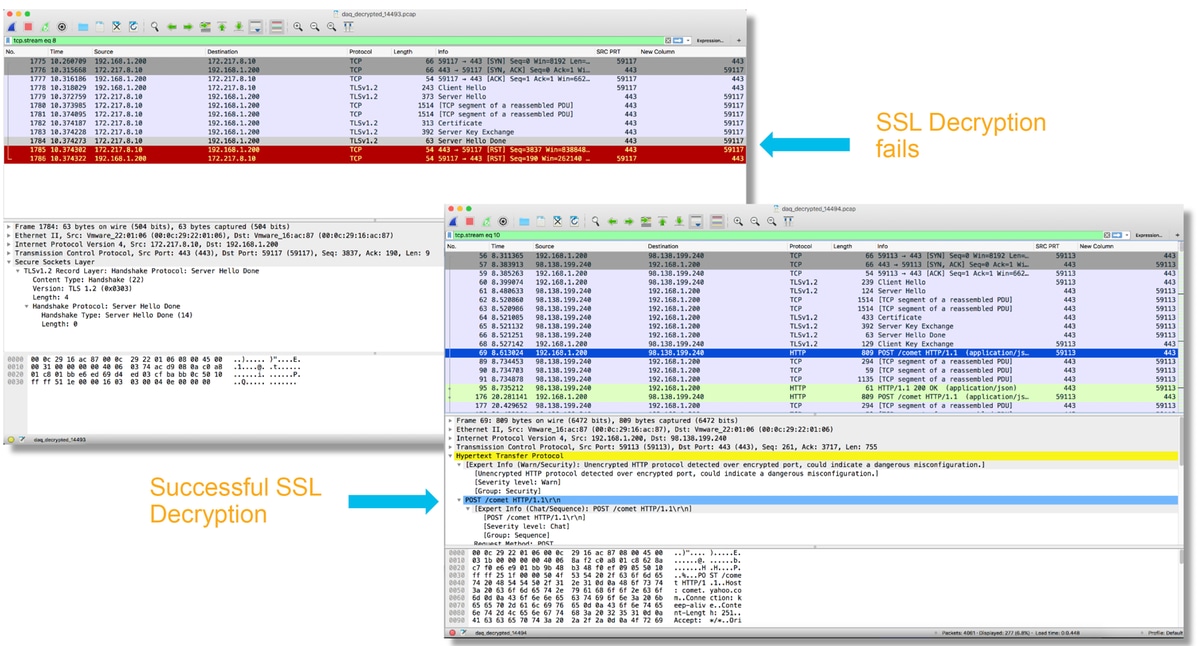 Caution: Before submitting a decrypted PCAP capture to TAC, it is recommended to filter out and limit the capture file to the problematic flows, as to avoid revealing any sensitive data unnecessarily.

The packet capture can also be evaluated to see if any client hello modification is taking place.

The packet capture on the left depicts the original client hello. The one on the right shows that server-side packets. Notice that the extended master secret has been removed via the CHMod feature in Firepower. 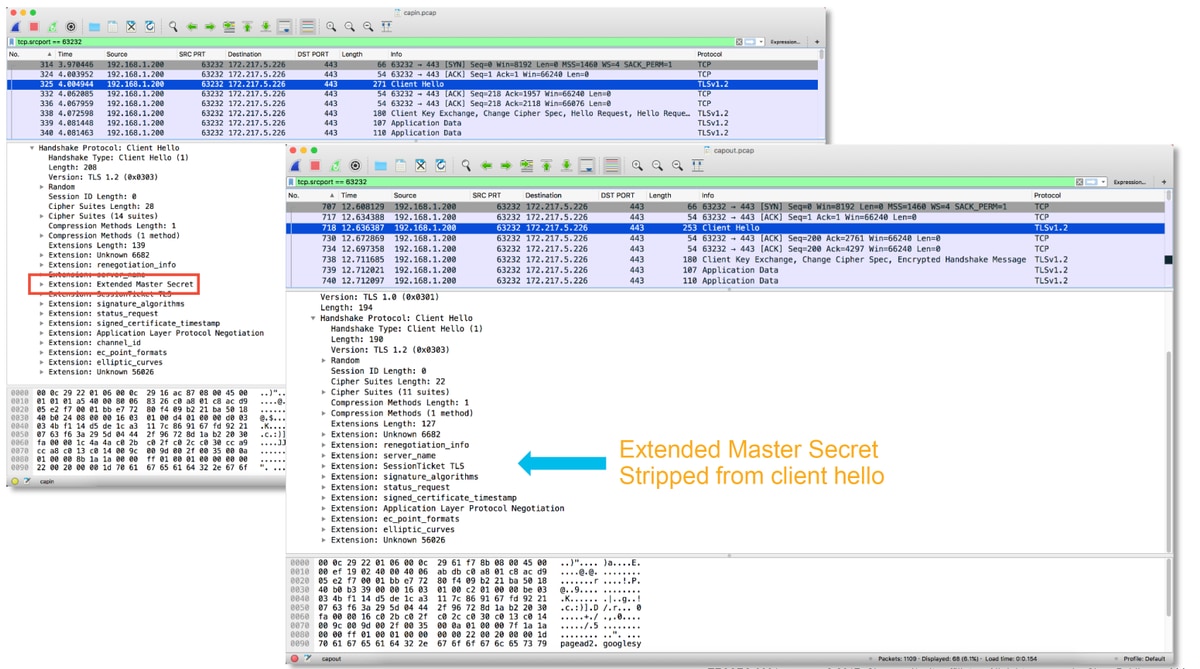 For SSL Policy rules with an action of "Decrypt - Resign", make sure that the client hosts trust the Certificate Authority (CA) used as the resigning CA. The end users should have no indication that they are being man-in-the-middled by the firewall. They should trust the signing CA. This is most commonly enforced through Active Directory (AD) Group Policy but it depends on the company policy and AD Infrastructure.

For more information, you can review the following article, which outlines how to create an SSL Policy.

Some basic mitigation steps can be followed in order to:

Add Do Not Decrypt (DnD) Rules

After saving and deploying the policy, the troubleshooting steps outlined above can be followed again to see what Firepower is doing with the traffic.

In some cases, troubleshooting can reveal that Firepower is running into an issue with decrypting certain traffic. The system support ssl-client-hello-tuning utility can be run on the CLI to cause Firepower to remove certain data from a client hello packet.

Caution: The snort process must be restarted before the client hello modification changes take effect, which can cause a few packets to be dropped. Stateful protocols such as TCP traffic are retransmitted, but other traffic, such as UDP, can be negatively affected.

In order to revert any changes made to the client hello modification settings, the system support ssl-client-hello-reset command can be implemented.

If it has been determined that the SSL Policy component is not the cause of the issue, the next step would be to troubleshoot the Active Authentication feature.