When trying to determine if an issue is caused by identity, it is important to understand what traffic this feature can impact. The only features in identity itself that can cause traffic interuptions are the ones related to active authentication. Passive authentication cannot cause traffic to be dropped unexpectedly. It is important to understand that only HTTP(S) traffic is impacted by active authentication. If other traffic is impacted because identity is not working then this is more likely because the policy uses users/groups to allow/block traffic, so when the identity feature can't identify users, unexpected things can occur, but it depends on the device Access Control policy and Identity Policy. The troubleshooting in this section walks through issues related to active authentication only.

The active authentication features involve the Firepower device running an HTTP server. When traffic matches an Identity Policy rule which contains an Active Authentication action, Firepower sends a 307 (temporary redirect) packet into the session, so as to redirect clients to its captive portal server.

There are currently five different types of active authentication. Two redirects to a hostname which consists of the sensor's hostname and the Active Directory primary domain tied to the realm, and three redirects to the IP address of the interface on the Firepower device which is performing the captive portal redirect. 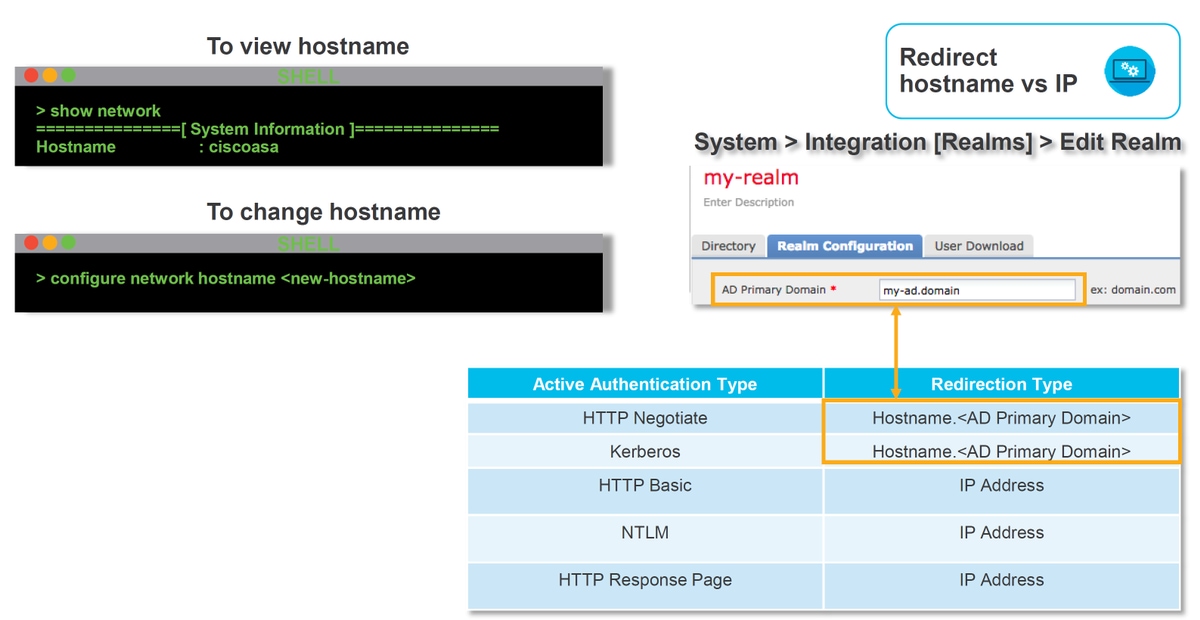 If active authentication is redirecting to the hostname, it would be redirecting the clients to ciscoasa.my-ad.domain:<port_used_for_captive_portal>

The two captures are initiated, the interesting traffic is run through the Firepower device, then the captures are stopped.

Notice that the inside interface packet capture file, "ins_ntlm", is copied to the /mnt/disk0 directory. It can then be copied to the /var/common directory so as to be downloaded off of the device (/ngfw/var/common on all FTD platforms):

The packet capture files can then be copied off of the Firepower device from the > prompt using the directions in this article.

Alternatively, there is n option on the Firepower Management Center (FMC) in Firepower version 6.2.0 and greater. To access this utility on the FMC, navigate to Devices > Device Management. Then, click on the

icon next to the device in question, followed by Advanced Troubleshooting > File Download. You can then enter the name of a file in question and click Download.

PCAP analysis in Wireshark can be performed to help identify the issue within the active authentication operations. Since a non-standard port is used in the captive portal configuration (885 by default), Wireshark needs to be configured to decode the traffic like SSL.

The inside interface capture and the tunnel interface capture should be compared. The best way to identify the session in question in both PCAP files is to locate the unique source port since the IP addresses is different.

In the example above, notice that the server hello packet is missing from the inside interface capture. This means that it never made it back to the client. It is possible that the packet was dropped by snort, or possibly due to a defect or misconfiguration.

Note: Snort inspects its own captive portal traffic so as to prevent any HTTP exploits.

If the problem is not in the SSL stack, it may be beneficial to decrypt the data in the PCAP file so as to see the HTTP stream. There are two methods by which this can be accomplished.

Caution: If method 2 is used, do not provide Cisco Technical Assistance Center (TAC) your private key. A temporary test certificate and key can be used, however. A test user should also be used in testing.

In the example below, a PCAP file has been decrypted. It shows that NTLM is being used as the active authentication method. 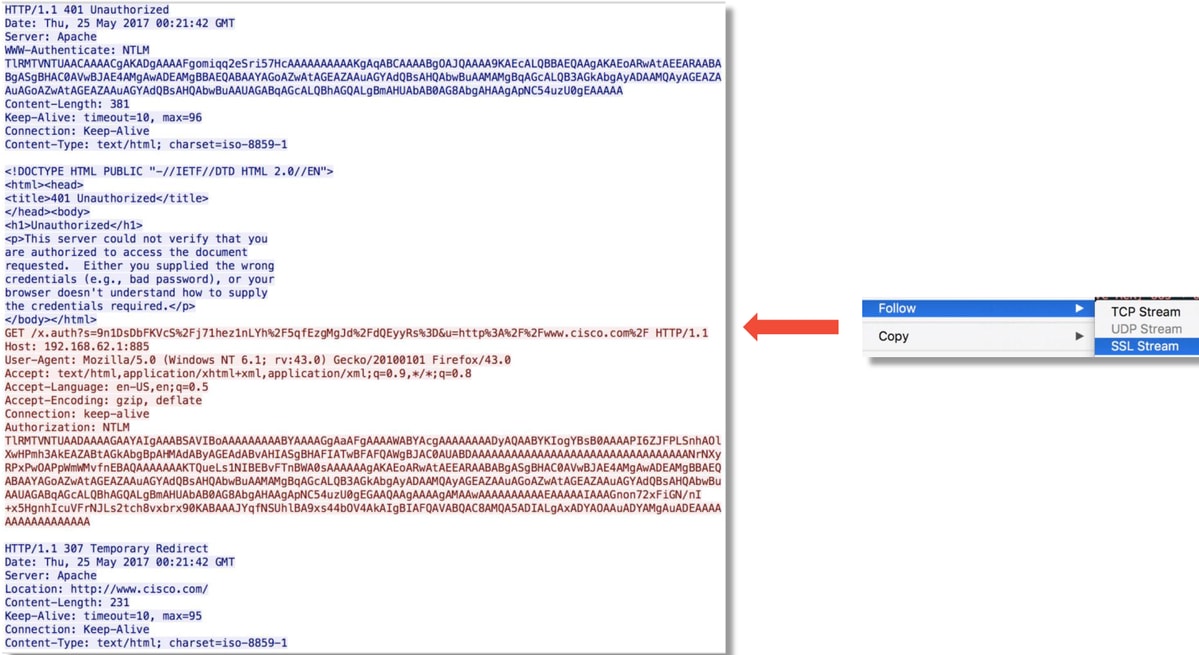 After NTLM authorization takes place, the client is redirected back to the original session, so that it can reach its intended destination, which is http://www.cisco.com.

Switch to Passive Authentication Only 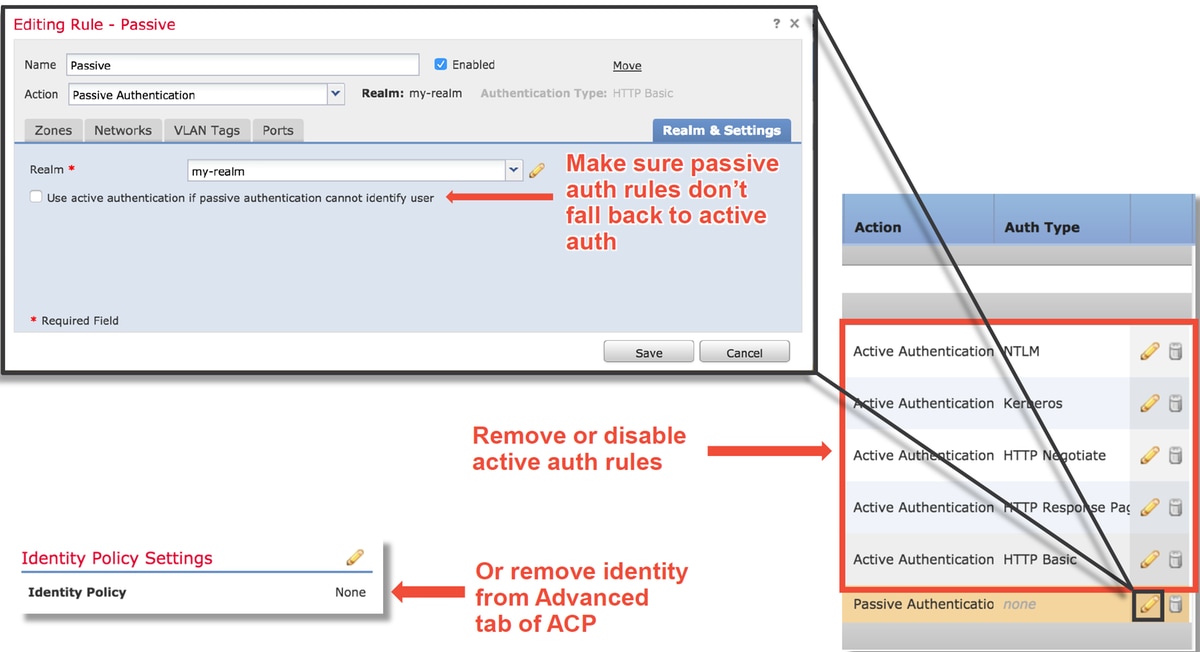 If it has been determined that the Active Authentication component is not the cause of the issue, the next step would be to troubleshoot the Intrusion Policy feature.