The information in this document is based on the Nexus 9000 Series Switch platform.

Virtual PortChannels (vPCs) allow links that are physically connected to two different Cisco switches to appear as a single PortChannel to a third device. The third device can be a switch, a server, or any other networking device that supports IEEE 802.3ad PortChannels. vPC also allows the creation of Layer 2 PortChannels that span two switches. At this time, vPC is implemented on Cisco Nexus 9000, 7000, 5000, and 3000 Series platforms (with or without Cisco Nexus 2000 Series Fabric Extenders).

Although both vPC switches appear as a single switch to a downstream device, among themselves two vPC switches have clearly defined vPC roles: vPC Primary and vPC Secondary.

vPC roles are non-preemptive, which means a device can be configured as vPC primary but operate as vPC secondary peer device. This can happen in this scenario:

You can also use role priority in vPC domain mode command to influence vPC Election process. The range of values is from 1 to 65636, and the default value is 32667. A lower value means that this switch has a better chance to be the primary vPC.

When you change the priority of the vPC peer devices, it can cause the interfaces in your network to go up and down. If you want to configure the role priority again to make one vPC device the primary device, configure the role priority on both the primary vPC device with a lower priority value and the secondary vPC device with the higher value. Then, shut down the vPC peer link on both devices and enter the shutdown command, and finally re-enable the port-channel on both devices and enter the no shutdown command.

The vPC hitless role change feature provides a framework to switch vPC roles between vPC peers without an impact on traffic flows. The vPC role swapping is done based on the role priority value of the device under the vPC domain. A vPC peer device with lower role priority is selected as the primary vPC device when the vpc role preempt command is executed.

vPC Systems Behavior When a vPC Peer-Link Goes Down

When vPC peer-link fails down and vPC peer-keepalive link is still up, the vPC secondary peer device performs these operations:

This protective behavior from vPC redirects all south-to-north traffic to the vPC primary device.

Please note that when vPC peer-link is down, both vPC peer devices cannot synchronize with each other anymore so the designed protection mechanism leads to the isolation of one of the peer devices (in occurrence the secondary peer device) from the data path.

vPC Master Sticky bit is a Programmed Protection Mechanism introduced to avoid unnecessary role change (which would potentially cause disruption on the network) when the Primary Switch gets reloaded unexpectedly. vPC Master Sticky Bit allows the alive switch sticks to its PRIMARY role when a dead switch comes back alive or when an isolated switch is integrated back into the VPC domain.

1. vPC Master Sticky Bit value is set to TRUE in this scenario:

2. vPC Master Sticky Bit value is set to FALSE in these scenarios:

vPC Sticky master bit is reported under vPC Manager software component structure and can be checked with this NX-OS exec mode command.

After a vPC peer device reloads and comes back up, the routing protocol needs time to reconverge. The recovering vPCs leg can black hole routed traffic from access to aggregation/core until uplink Layer 3 connectivity is re-established.

vPC Delay Restore feature delays vPCs leg bring-up on the vPC peer device that recovers. vPC Delay Restore allows for Layer 3 routing protocols to converge before they allow any traffic on vPC leg. This results in a more graceful restoration and zero packet loss during the recovery phase (traffic still gets diverted on the alive vPC peer device). This feature is enabled by default with a vPC restoration default timer of 30 seconds. The timer can be tuned to a specific Layer 3 convergence baseline from 1 to 3600 seconds.

To delay the VLAN interfaces on the restored vPC peer device from coming up, use the interfaces-vlan option of the delay restore command. This feature is enabled by default with a vPC restoration default timer of 10 seconds.

A new command delay restore interface-VLAN batch <1-4094> is introduced to configure the pacer to bring up the VLAN or bridge-domain interfaces in a batch of 200 SVI's at a time. The vPC delay restore timer command delay restore <Timeout value> can be configured to a value greater than the sum of all batch timers configured. This is done so that the VPC leg is brought up only after all the SVI's has completely come up to avoid any blackhole of traffic. 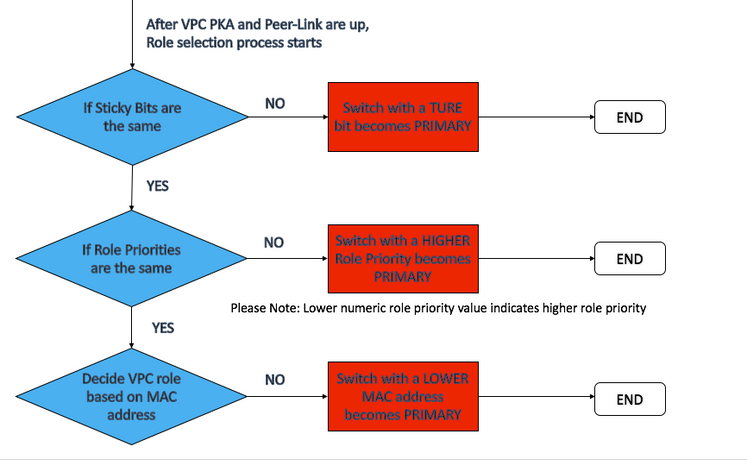 It is important to understand the vPC Election process and it cannot be underestimated, especially in vPC recovery scenarios.

Image 2 shows a typical VPC setup, Nexus-01 is the VPC Primary and Nexus-02 is the VPC Secondary. Both of them has their Sticky Bits re-set to FALSE by default. 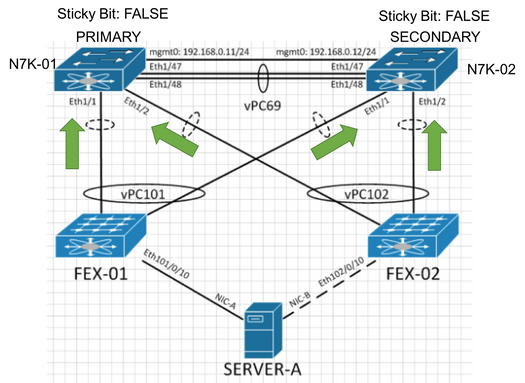 As shown in this image, Nexus-01 now has a power outage and has been isolated from the network. Nexus-02 promoted itself to vPC Primary and set vPC Sticky Bit to TRUE.

And Nexus-02 now becomes Operational Primary, and the sticky bit is now set to TRUE. 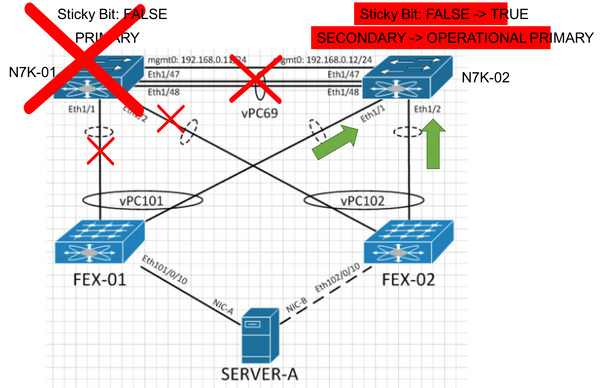 As shown in this image, when Nexus-01 comes back online after the power outage has been restored, Nexus-02 retains the Operational PRIMARY role regardless of its role priority (because it has a TRUE sticky bit) and Nexus-02 takes the SECONDARY role when it comes online. Only Nexus-01 begins the VPC initialization process whereas N7K-02 remains as Primary and forwards traffic as usual. Therefore, no network outage is seen.

There are two timers associated with the vPC initialization process on Nexus-01, which is now the vPC operational Secondary device:

As a result, you can expect a 40-second recovery time on Nexus-01 after Nexus-01 is re-introduced back into the network as a vPC Secondary device. However, since Nexus-02 takes the Primary role, all traffic now is passing through Nexus-01 as mentioned above, no network outage is seen. 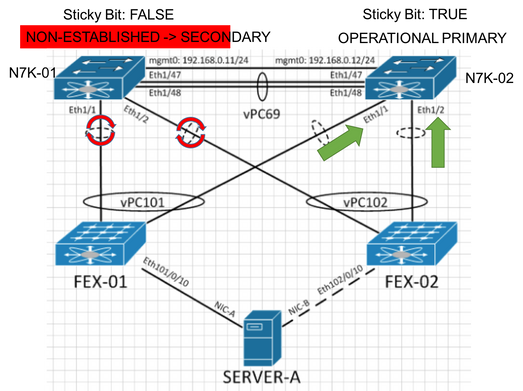 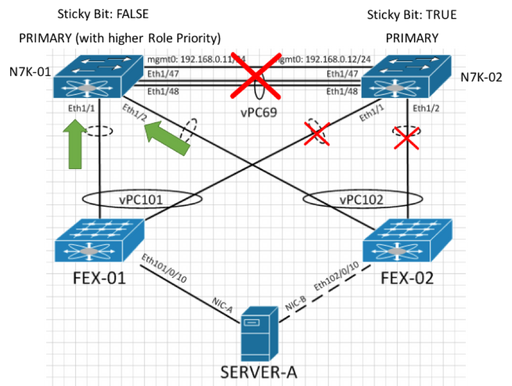 When the PKA and Peer Link are restored, Nexus-02 takes the PRIMARY role regardless of its role priority (because it has a TRUE sticky bit) and force Nexus-01 to become SECONDARY and the VPC initialization process begins on Nexus-01. Therefore, link E1/1 and E1/2 of Nexus-01 is suspended by VPC and comes online after the relay restore timers (40 seconds by default) expire.  In this case, a 40-second network outage is seen after the PKA and Peer Link are restored, as shown in image 6. 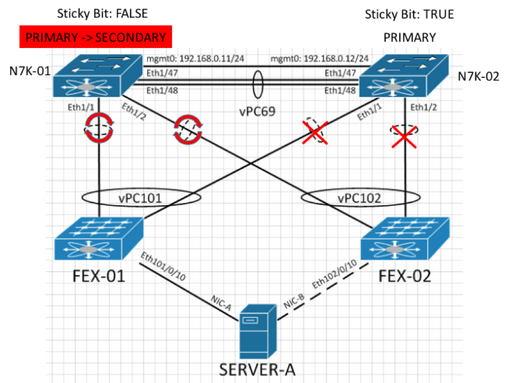 Note: When a Nexus is reintroduced to the vPC domain, you must ensure that there is no vPC role change in the active vPC device. To avoid a vPC role change when the sticky bits of both switches are set to the same value, the active vPC device has to have a higher role priority for it to retain its PRIMARY role. Please refer to Image 1, in this document for more information on VPC role election process.