This document describes how to troubleshoot the corrupted ethernet packet on Cisco Nexus 9000 when a padding information is corrupted or malformed.

The minimal size of an Ethernet frame is 64 bytes, no matter VLAN tag is present there or not.

The minimal Ethernet payload size is:

You can verify this fact:

The minimal size of an ethernet packet is 64 bytes, no matter VLAN header is present there or not. The server is allowed to send a 64 bytes long packet that contains a VLAN, which you should accept and process correctly.

Note: This behaviour is correctly handled by a catalyst 4500x not by Nexus 9k.

How is a Packet Processed by a Switch

Step 5. It adds the FCS, making the packet 64 bytes long.

Padding should not get modified when a packet goes through cut-through switch.

Instead of padding with zeroes, the packet is padded with garbage characters, in most of the cases it has no impact because checksums are not modified and so nobody uses these datas. However, if customers have a special usage and need to recompute the checksums, these garbage data leads to corruption of checksums in the end (other appliances, like NAT/load-balancers might see the issue too).

Use Linux hosts with directly connected hardware to the N9K (no virtualization of any kind) here (1000base-T links).

Just connect the windows host and send the tagged frames, they should trigger the problem. Moreover, ensure that the Network Interface Card (NIC) has the ability to tag the packet.

Switch adds the non-zero padding to the frames that passes through.

You can use netcat to send and receive the packets.

As shown in the image, the packet is transmitted.

The packet is received, as shown in the image:

As shown in the image, the wrong padding is highlighted. 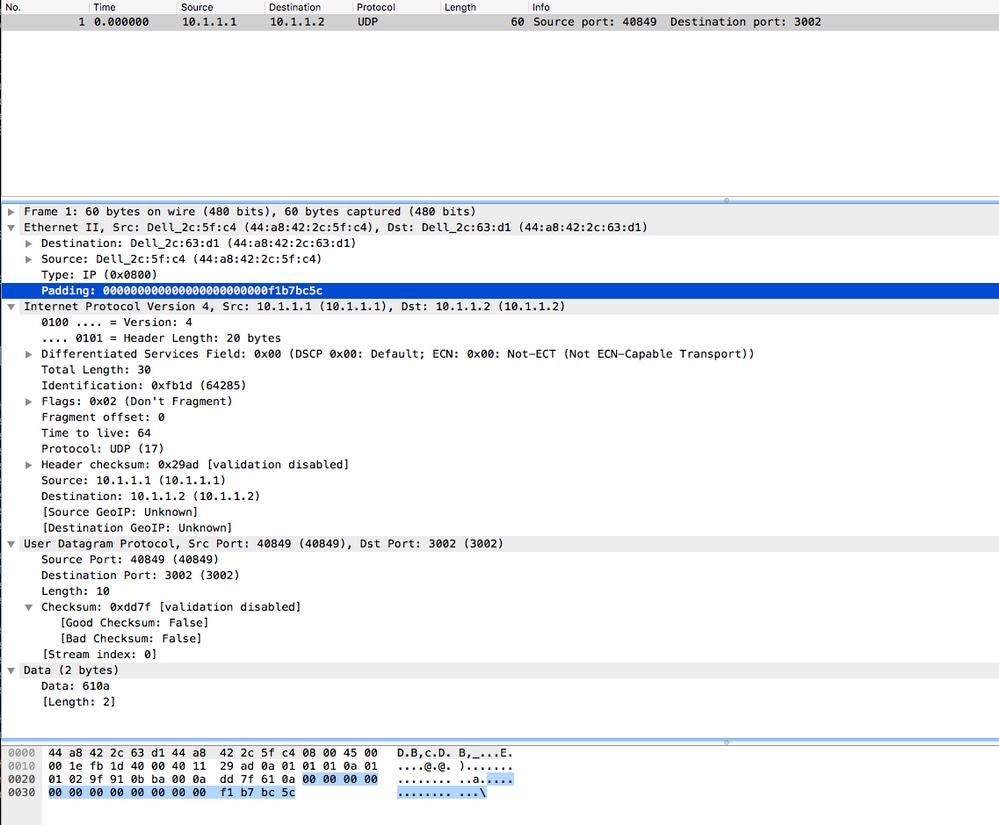 This is also displayed with a packet analyzer (in another packet, the data is different from the previous screenshots but test and bug is identical),

The workaround is to disable buffer-boost on interface where we have this server connected.