One of the triggers for this detection flow is defined in section 2.1.1:

In addition, if during this period the host receives any Address Resolution Protocol (ARP) Probe where the packet's 'target IP address' is the address being probed for, and the packet's 'sender hardware address' is not the hardware address of any of the host's interfaces, then the host SHOULD similarly treat this as an address conflict and signal an error to the configuring agent as above. This can occur if two (or more) hosts have, for whatever reason, been inadvertently configured with the same address, and both are simultaneously in the process of probing that address to see if it can safely be used.

Cisco IOS® uses the Address Resolution Protocol (ARP) Probe sourced from an address of 0.0.0.0 to maintain the IP device-tracking cache when the IP device track occurs, and a feature that uses it is enabled (such as 802.1x) on a Cisco IOS switch. The purpose of the IP device track is for the switch to obtain and maintain a list of devices connected to the switch by an IP address. The probe does not populate the track entry. It is used to activate and maintain the entry in the table after it is learned. This IP address is then used when an Access Control List (ACL) is applied to the interface to substitute the source address in the ACL with the client IP address. This function is critical when access lists are used with 802.1x or any other Flex-Auth function on Cisco switches.

If the switch sends out an ARP Probe for the client while the Microsoft Windows PC is in its duplicate-address detection phase, then Microsoft Windows detects the probe as a duplicate IP address and presents a message that a duplicate IP address was found on the network for 0.0.0.0. The PC does not obtain an IP address, and the user must either manually release/renew the address, disconnect and reconnect to the network, or reboot the PC to gain network access.

This is an example of the failed packet sequence: 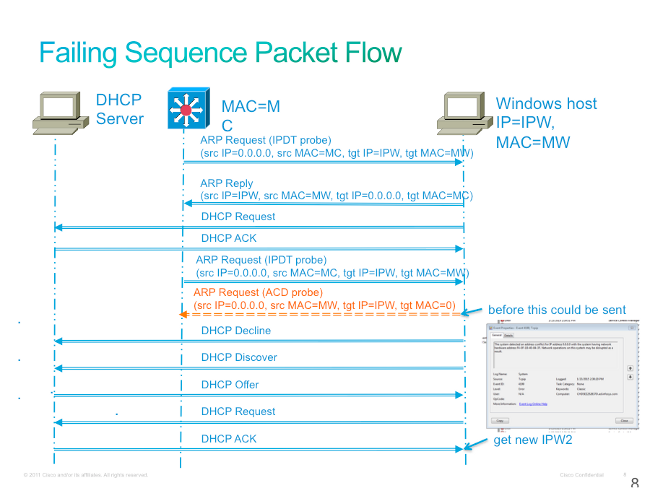 There are multiple methods that can be used to work around this issue. This a list of possible workarounds: