Option 1: Cisco Nexus 9500 Platform at the Core and the Aggregation Layer 9

Another important aspect of the data center design is the flexibility to quickly deploy and support new services. Designing a flexible architecture that can support new applications in a short time frame can result in a significant competitive advantage.

The basic data center network design is based on a proven layered approach that has been tested and improved over the past several years in some of the largest data center implementations in the world. The layered approach is the foundation of a data center design that seeks to improve scalability, performance, flexibility, resiliency, and maintenance.

A classic network in the context of this document is the typical three-tier architecture commonly deployed in many data center environments. It has distinct core, aggregation, and access layers, which together provide the foundation for any data center design (Table 1). 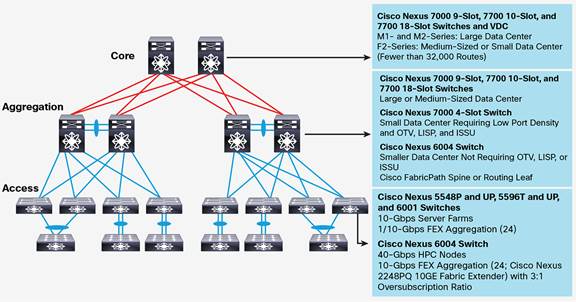 The main features of the new Cisco Nexus 9000 Series are support for FEX, virtual Port Channel (vPC), and Virtual Extensible LAN (VXLAN). The data center architecture can be deployed in a classic design in which existing designs variations are supported, such as the following:

Cisco FabricPath provides another possible combination of technology in which a move to the Cisco Nexus 9000 Series affects the topology. Cisco FabricPath allows the creation of simple, scalable, and efficient Layer 2 domains that apply to many network scenarios. Cisco FabricPath brings the stability and scalability of routing to Layer 2.

With Cisco FabricPath, the switched domain no longer has to be segmented, providing data center-wide workload mobility. Because traffic is no longer forwarded using Spanning Tree Protocol, the bisectional bandwidth of the network is expanded, providing enhanced scalability and a completely nonblocking environment. This type of topology can also be transitioned to the Cisco Nexus 9000 Series, but without the use of Cisco FabricPath in the end state.

From a design perspective, the main point here is that other than the hardware transition, everything will more or less remain the same with the insertion of the Cisco Nexus 9000 Series chassis. 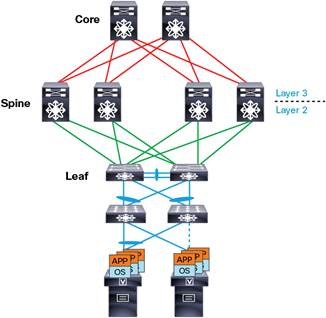 In planning a migration, care needs to be taken from a Layer 2 perspective (for example, with Rapid per-VLAN Spanning Tree [RPVST+], vPC, and Cisco FabricPath). Current policies, such those for access control lists (ACLs) and virtual LAN ACLs (VACLs), must be considered in terms of traffic flow and so on and any other application touchpoints.

With their exceptional performance and comprehensive feature set, Cisco Nexus 9000 Series Switches are versatile platforms that can be deployed in multiple scenarios, including the following:

With new business services and applications requiring new data center infrastructure designs, it is important to consider the implications for these new designs for current services and applications. Factors such as Layer 2 mobility, bandwidth and latency, and symmetrical paths through load balancers and firewalls are important to plan for to help ensure successful migration of business services from the current setup to a new data center infrastructure.

A data center switching system (DCSS) consists of one or many switches (of any kind) that are interconnected so that they collectively provide Layer 1 through 3 connectivity to servers and Layer 4 through 7 devices and the applications that connect to them (Figure 3). Even in the case of Cisco Catalyst® 6500 Series service modules such as the Cisco Catalyst 6500 Series Firewall Services Module (FWSM), Cisco Application Control Engine (ACE), and Cisco Catalyst 6500 Series Network Analysis Module (NAM), which share a chassis, an internal connection still exists between the switch and the service modules.

●   One or more switches

◦     Downlinks to servers and hosts

In migrating your data center to the Cisco Nexus 9000 Series, you need to consider not only compatibility with existing traditional servers and devices; you also need to consider the next-generation capabilities the Cisco Nexus 9000 Series, including 10/40-Gbps connectivity, Layer 2 mobility, new features, high performance, and programmability (Figure 4).

This document provides guidance in the planning, design, and deployment of a data center infrastructure based on the Cisco Nexus 9500 platform.

This section discusses network architectures based on a multitier model (Figure 5):

●   The data center core interconnects all the building blocks.

●   The core building block also has direct connectivity to other data centers. 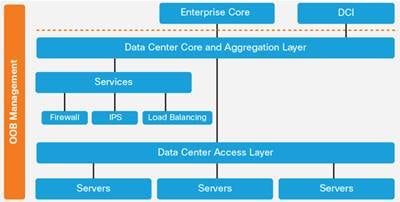 Figure 4 shows the core, aggregation, and access layers, but in a more complete picture of the data center, other components are connected to the typical tiers.

The core provides a fabric for high-speed packet switching between multiple aggregation modules. This layer serves as the gateway to the campus core, where other modules connect (for example, the extranet, WAN, and Internet edge). All links connecting the data center core are terminated at Layer 3 and typically use 10 Gigabit Ethernet interfaces to support high throughput and performance and to meet oversubscription ratios.

When determining whether to implement a data center core, consider the following:

●   Future impact: The potential business impact of implementing a separate data center core at a later time may make implementing it during the initial implementation stage a preferable approach.

Option 1: Cisco Nexus 9500 Platform at the Core and the Aggregation Layer

The Cisco Nexus 9508 8-slot switch is a next-generation high-density modular switch with the following features:

The common equipment for the Cisco Nexus 9508 includes the following:

The fan trays and the fabric modules are accessed through the rear of the chassis. Chassis have eight horizontal slots dedicated to the I/O modules.

Cisco Nexus 9508 Switches can be fully populated with 10, 40, and (future) 100 Gigabit Ethernet modules with no bandwidth or slot restrictions. Online insertion and removal of all line cards is supported in all eight I/O slots.

Currently, Fibre Channel over Ethernet (FCoE) support is not available for this design.

A vPC allows links physically connected to two different Cisco Nexus 9000 Series Switches to appear as a single Port Channel to a third device. A vPC can provide Layer 2 multipathing, which allows the creation of redundancy by increasing bandwidth, enabling multiple parallel paths between nodes and load balancing of traffic where alternative paths exist.

The vPC design remains the same as described in a vPC design guide with the exception that the Cisco Nexus 9000 Series does not support vPC active-active FEX or two-layer vPC (eVPC). Refer to the vPC design and best practices guide for more information: http://www.cisco.com/en/US/docs/switches/datacenter/sw/design/vpc_design/vpc_best_practices_design_guide.pdf. In a vPC topology, all links between the aggregation and access layers are forwarding and are part of a vPC.

An existing Cisco Nexus 7000 Series Switch can be replaced with a Cisco Nexus 9500 platform switch with one exception: Cisco Nexus 9000 Series Switches do not support vPC active-active or two-layer vPC (eVPC) designes. The rest of the network topology and design does not change. Figure 10 shows the new topology. 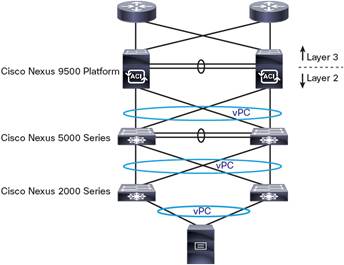 Figure 11 shows the physical peering from the Cisco Nexus 9500 platform.

The Cisco Nexus 9500 platform uses VXLAN, a Layer 2 overlay scheme over a Layer 3 network. VXLAN can be implemented both on hypervisor-based virtual switches to allow scalable virtual machine deployments and on physical switches to bridge VXLAN segments back to VLAN segments.

VXLAN extends the Layer 2 segment-ID field to 24 bits, potentially allowing up to 16 million unique Layer 2 segments in contrast to the 4000 segments achievable with VLANs over the same network. Each of these segments represents a unique Layer 2 broadcast domain and can be administered in such a way that it uniquely identifies a given tenant’s address space or subnet. Note that the core and access-layer switches must be Cisco Nexus 9000 Series Switches to implement VXLAN. 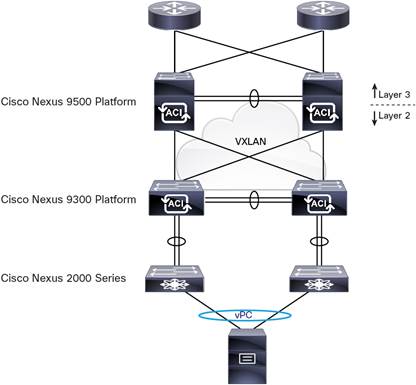 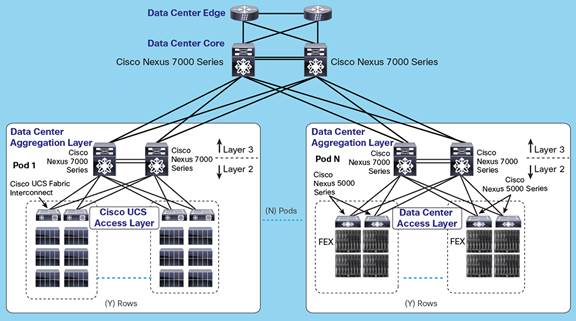 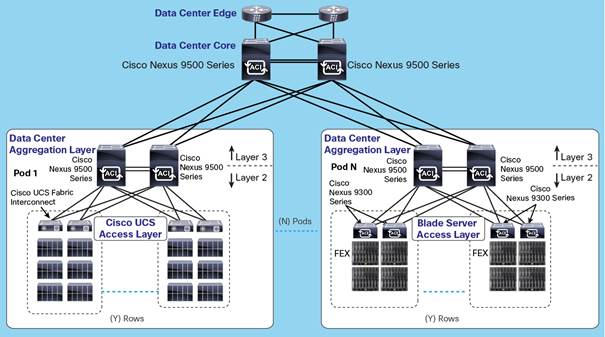 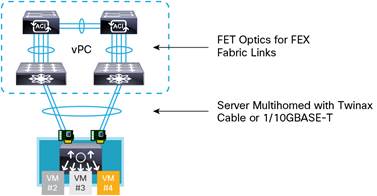 Figure 16 shows the initial supported connections between the fabric extenders and the Cisco Nexus 9000 Series Switches. 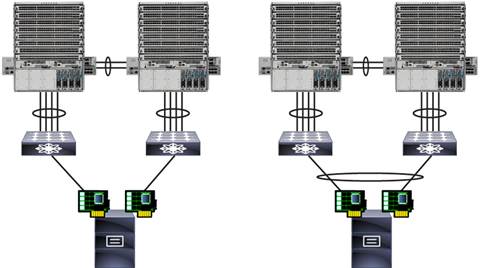