The Cisco Nexus 2000 Series Fabric Extenders behave like remote line cards for a parent Cisco Nexus switch. The fabric extenders are essentially extensions of the parent Cisco Nexus switch fabric, with the fabric extenders and the parent switch together forming a distributed modular system. This architecture enables physical topologies with the flexibility and benefits of both top-of-rack (ToR) and end-of-row (EoR) deployments (Figure 1). 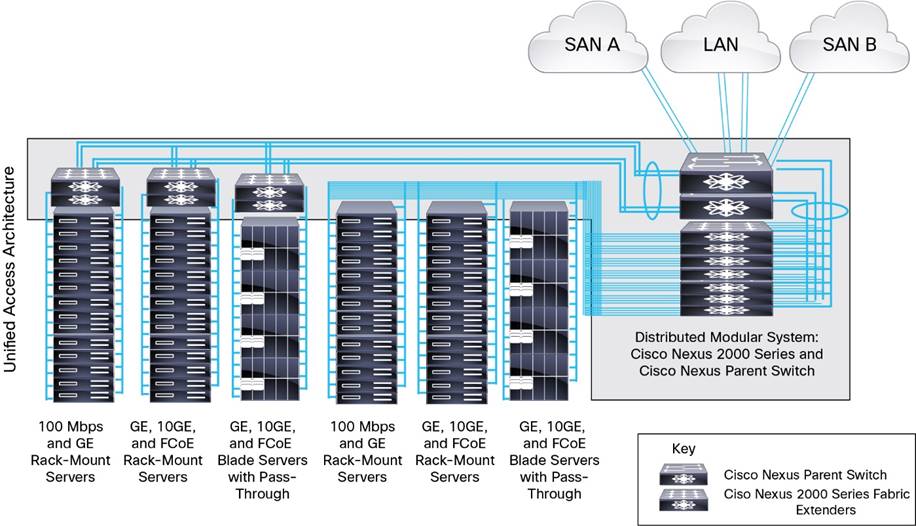 ●    Increased business benefits: Consolidation, cabling reduction, rack-space reduction, reduced power and cooling, investment protection through feature inheritance from the parent switch, and the capability to add functions without the need for a major equipment upgrade of server-attached infrastructure all contribute to reduced operating expenses (OpEx) and capital expenditures (CapEx).

The Cisco Nexus 2000 Series design aligns with that of servers. It offers front-to-back cooling, compatible with data center hot-aisle and cold-aisle designs, all switch ports at the rear of the unit in close proximity to server ports, and all user-serviceable components accessible from the front panel. It also offers back-to-front cooling, with switch ports in front of the chassis, aligned with the cold aisle, for optimized cabling in network racks. The Cisco Nexus 2000 Series is built for nonstop operation, with redundant hot-swappable power supplies and a hot-swappable fan tray with redundant fans. Its compact 1-rack-unit (1RU) form factor takes up relatively little space, making it easy to incorporate into rack designs. The fabric extenders are available in several models to provide speed, connectivity, and port-density options (Figure 2).

Table 1 lists the Cisco Nexus 2000 Series Fabric Extenders. Fabric extenders can be mixed and matched to a parent switch to provide connectivity options.

The Cisco Nexus 2232TM-E fabric extender (Figure 6) supports scalable 1/10GBASE-T environments, ease of migration from 100BASE-T/1GBASE-T to 10GBASE-T, and effective reuse of existing structured cabling. It comes with an uplink module that supports eight 10 Gigabit Ethernet fabric interfaces. It is a superset of the Cisco Nexus 2232TM with the latest generation of 10GBASE-T PHY, enabling lower power and improved bit error rate (BER). The Cisco Nexus 2232TM-E supports DCB and LAN and SAN consolidation. FCoE support distances of up to 30 meters with Category 6a and 7 cables from the adapter to the fabric extender.

●    Flexible physical topologies: The Cisco Nexus 2000 Series architecture allows the Layer 1 and 2 topologies to be decoupled, therefore providing flexibility in physical architecture designs, including ToR, middle-of-row (MoR), and EoR deployments, while allowing quick expansion of network capacity and remote line-card portability across multiple parent switches. It is also space optimized for all these architectures.

Today’s data centers must have massive scalability to manage the combination of an increasing number of servers and a higher demand for bandwidth from each server. The Cisco Nexus 2000 Series increases the scalability of the access layer to accommodate both sets of demands without increasing management points within the network.

●    Layer 2 scalability: Reliance on Spanning Tree Protocol is eliminated between the fabric extender and the parent switch, thus enabling a large, multipath, loop-free topology. Use of a single management entity to support a large server domain allows policy to be enforced more efficiently and enhances Layer 2 data center access scalability. Use of the virtual PortChannel (vPC) feature also allows fast convergence and effective use of bandwidth in Layer 2 environments.

●    Software maintenance simplification: The Cisco Nexus 2000 Series software is embedded in the Cisco Nexus parent switch software. The fabric extender is a ready-to-use device that automatically downloads the software image from the parent switch in the same way that a line card downloads software from the supervisor engine in a modular chassis. In-Service Software Upgrade (ISSU) on the fabric extenders provides the capability to perform transparent software upgrades, reducing downtime and allowing customers to integrate the newest features and functions with little or no negative effect on network operation for Ethernet, storage, and converged network environments.

●    Switch feature consistency across a large number of servers: The Cisco Nexus 2000 Series forwards all traffic to the parent Cisco Nexus switch over 10 Gigabit Ethernet fabric uplinks. Passing all traffic to the parent switch allows traffic to be shaped according to policies established on the parent switch with a single point of management. Standardizing on the Cisco Nexus switches allows data centers to support the same switch features across the entire access layer with a single point of management.

●    Consolidation: The Cisco Nexus 2000 Series protects an organization’s investment into the future, supporting evolving data center needs by providing an easy migration path to low-latency 10 Gigabit Ethernet, high-performance computing (HPC), virtual machine-aware networks. In addition, the combination of the Cisco Nexus 5000 or 6000 Series and Cisco Nexus 2232PP or 2248PQ provides a unified network fabric that supports LAN and SAN consolidation. Another benefit of the Cisco Nexus 2000 Series architecture is the capability to collapse data center access and aggregation layers into one single layer.

●    Cabling reduction with optimal intra- and inter-rack cabling options: The Cisco Nexus 2000 Series supports ToR, EoR, and MoR deployment models. Placing the fabric extender at the top of the rack allows the use of short cables from the rack to the servers, reducing cable costs, air dams, complexity, and opportunities for error. The only inter-rack cabling required is for uplinks from the fabric extender to the parent switch. Placing the parent Cisco Nexus switch at the end or middle of a row of racks makes efficient use of powerful switching resources.

◦    Short intra-rack runs of copper: Intra-rack cables connecting to Gigabit Ethernet servers can be Category 5e, 6, 6a, or 7 with the Cisco Nexus 2148T, 2224TP, 2248TP, and 2248TP-E fabric extenders. Category 6, 6a, or 7 can connect 10GBASE-T servers to the Cisco Nexus 2232TM and 2232TM-E. Twinax cables connect servers to ToR Cisco Nexus 2232PP fabric extenders. This model allows server racks and PoDs to be preconfigured by server vendors so that they can be rolled into place and put into service upon arrival.

◦    Longer inter-rack horizontal runs of fiber: Cisco Nexus 2000 Series Fabric Extenders in each rack are connected to parent switches that are placed at the end or middle of the row. For long reach between the fabric extender and the parent switch, you can use Fabric Extender Transceiver, SFP+ short-reach (SR), SFP+ long-reach (LR) optics over OM2 or OM3 cables, and QSFP+ optics for 40-Gbps connectivity. Fiber protects investments into the future because it will support upcoming Ethernet standards, including 40 and 100 Gigabit Ethernet. If the distance to the Cisco Nexus 5000, 6000, or 7000 Series Switch is less than 10 meters, you can use Twinax cables (CX1 direct attach). Alternatively, you can use copper cables to reach EoR or MoR 1GBASE-T or 10GBASE-T fabric extenders.

●    Effective bandwidth utilization: Today’s data center servers are either single- or dual-homed to the network. However, network designs almost always involve redundant deployment. Through the vPC feature support on the Cisco Nexus 5000, 6000, and 7000 Series, a server can be dually connected to a pair of fabric extenders, or each fabric extender can be connected to a pair of Cisco Nexus 5000, 6000, or 7000 Series Switches, thus giving customers both server and fabric extender connectivity redundancy and providing active-active connectivity with twice the bandwidth utilization as in active-standby or forwarding-blocking configurations.

The fabric extenders can be used in the following deployment scenarios:

The Cisco Nexus 2000 Series can be used in conjunction with a Cisco Nexus parent switch in four main design scenarios (shown in Figure 7):

●    vPC+: In this deployment scenario, access-layer redundancy is achieved through server vPC, fabric extender vPC, and EvPC. In addition, a vPC+ domain allows the Cisco Nexus parent switch and the fabric extenders to be viewed as a single virtual switch in a Cisco FabricPath network.

All topologies are supported with Cisco Nexus 5000 and 6000 Series parent switches.

The Cisco Nexus 2000 Series Fabric Extenders have a 1-year limited hardware warranty. The warranty includes hardware replacement with a 10-day turnaround from receipt of a return materials authorization (RMA).

Cisco offers a wide range of services to help accelerate your success in deploying and optimizing the Cisco Nexus 2000 Series Fabric Extenders in your data center. The innovative Cisco Services offerings are delivered through a unique combination of people, processes, tools, and partners and are focused on helping you increase operation efficiency and improve your data center network. Cisco Advanced Services use an architecture-led approach to help you align your data center infrastructure with your business goals and achieve long-term value. Cisco SMARTnet™ Service helps you resolve mission-critical problems with direct access at any time to Cisco network experts and award-winning resources. With this service, you can take advantage of the Cisco Smart Call Home capability, which offers proactive diagnostics and real-time alerts on your Cisco Nexus 5000, 6000, 7000, and 2000 Series Switches. Spanning the entire network lifecycle, Cisco Services offerings help increase investment protection, optimize network operations, support migration operations, and strengthen your IT expertise. For more information about Cisco Nexus services, visit http://www.cisco.com/go/nexusservices.

Cisco Capital makes it easier to get the right technology to achieve your objectives, enable business transformation and help you stay competitive. We can help you reduce the total cost of ownership, conserve capital, and accelerate growth. In more than 100 countries, our flexible payment solutions can help you acquire hardware, software, services and complementary third-party equipment in easy, predictable payments. Learn more.

[1] A PoD is a module or group of network, computing, storage, and application components that work together to deliver a network service. The PoD is a repeatable pattern, and its components increase the modularity, scalability, and manageability of data centers.
[2] Systems are fully loaded with two power supplies and one fan tray.