In a passive IPS deployment, the Firepower System monitors traffic flowing across a network using a switch SPAN (or mirror) port. The SPAN port allows for traffic to be copied from other ports on the switch. This provides the system visibility within the network without being in the flow of network traffic. When configured in a passive deployment, the system cannot take certain actions such as blocking or shaping traffic. Passive interfaces receive all traffic unconditionally, and no traffic received on these interfaces is retransmitted. Passive interfaces support both local SPAN and remote SPAN (RSPAN) traffic. 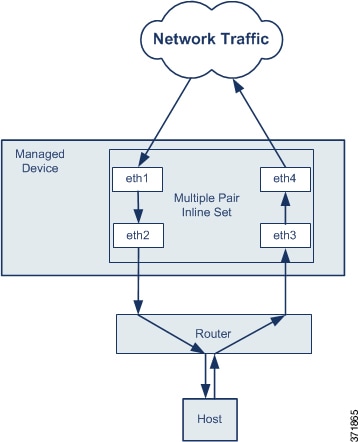 Behavior of the interface on a 7000 or 8000 Series or NGIPSv device when the Snort process is busy or down.

The Snort process can be busy when traffic buffers are full, indicating that there is more traffic than the managed device can handle, or because of other software issues.

The Snort process goes down when you deploy a configuration that requires it to restart. See Configurations that Restart the Snort Process When Deployed or Activated for more information.