Chapter: Configuring the Switch for Use with the ASA Services Module

Configuring the Switch for Use with the ASA Services Module

This chapter describes how to configure the Catalyst 6500 series or Cisco 7600 series switch for use with the ASASM. Before completing the procedures in this chapter, configure the basic properties of your switch, including assigning VLANs to switch ports, according to the documentation that came with your switch.

Information About the Switch

How the ASA Services Module Works with the Switch

You can install the ASASM in the Catalyst 6500 series and Cisco 7600 series switches with Cisco IOS software on both the switch supervisor and the integrated MSFC.

The Catalyst Operating System (OS) is not supported.

The ASA runs its own operating system.

The switch includes a switching processor (the supervisor) and a router (the MSFC). Although you need the MSFC as part of your system, you do not have to use it. If you choose to do so, you can assign one or more VLAN interfaces to the MSFC. You can alternatively use external routers instead of the MSFC.

In single context mode, you can place the router in front of the firewall or behind the firewall (see Figure 2-1). 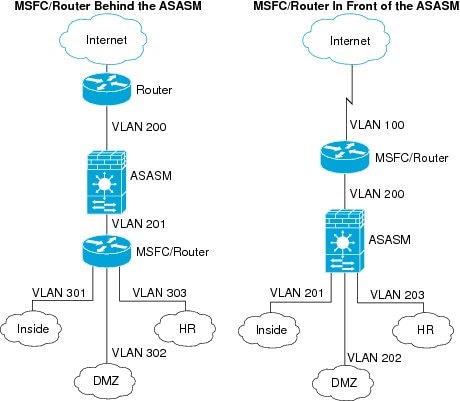 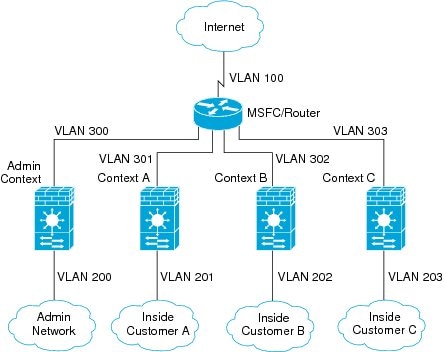 You can install the ASASM in the Catalyst 6500 series and Cisco 7600 series switches. The switch includes a switch (the supervisor engine) as well as a router (the MSFC).

The switch supports Cisco IOS software on both the switch supervisor engine and the integrated MSFC router.

The Catalyst operating system software is not supported.

The ASASM runs its own operating system.

Because the ASASM runs its own operating system, upgrading the Cisco IOS software does not affect the operation of the ASASM.

To view a matrix of hardware and software compatibility for the ASASM and Cisco IOS versions, see the Cisco ASA 5500 Series Hardware and Software Compatibility :

The connection between the ASASM and the switch is a single 20-GB interface.

For security reasons, by default, you can configure one SVI between the MSFC and the ASASM; you can enable multiple SVIs, but be sure you do not misconfigure your network.

For example, with multiple SVIs, you could accidentally allow traffic to pass around the ASASM by assigning both the inside and outside VLANs to the MSFC. (See Figure 2-3.) 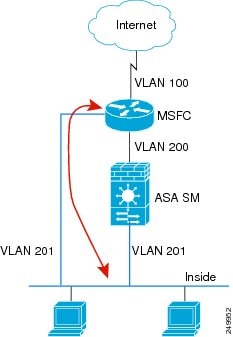 You might need to bypass the ASASM in some network scenarios. Figure 2-4 shows an IPX host on the same Ethernet segment as IP hosts. Because the ASASM in routed firewall mode only handles IP traffic and drops other protocol traffic like IPX (transparent firewall mode can optionally allow non-IP traffic), you might want to bypass the ASASM for IPX traffic. Make sure that you configure the MSFC with an access list that allows only IPX traffic to pass on VLAN 201. 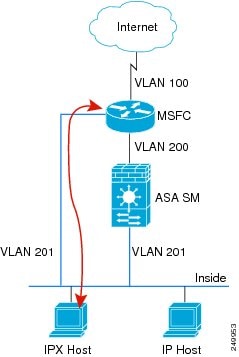 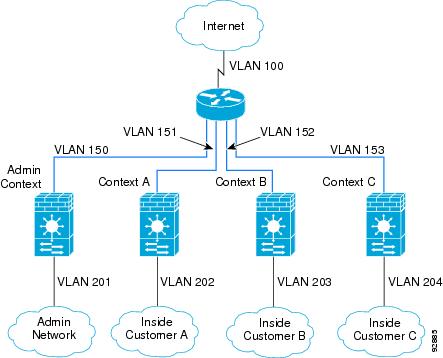 To verify that the switch acknowledges the ASASM and has brought it online, enter the following command.

The following is sample output from the show module command:

See the switch documentation for information about adding VLANs to the switch and assigning them to switch ports.

The following example shows how to create three firewall VLAN groups: one for each ASASM, and one that includes VLANs assigned to both ASASMs:

The following example shows how to configure private VLANs on the switch by assigning the primary VLAN to the ASASM:

Add the primary VLAN 200 to a firewall VLAN group, and assign the group to the ASASM:

Designate VLAN 200 as the primary VLAN:

Associate the secondary VLANs to the primary VLAN:

Assign VLAN membership to the host port. Interface f1/0/1 is a member of primary VLAN 200 and secondary isolated VLAN 501.

Assign VLAN membership to the promiscuous interface. Interface f1/0/2 is a member of primary VLAN 200. Secondary VLANs 501-503 are mapped to the primary VLAN.

If inter-VLAN routing is desired, configure a primary SVI and then map the secondary VLANs to the primary.

Using the MSFC as a Directly Connected Router (SVIs)

If you want to use the MSFC as a directly connected router (for example, as the default gateway connected to the ASASM outside interface), then add an ASASM VLAN interface to the MSFC as a switched virtual interface (SVI). See the “Information About SVIs” section.

For security reasons, by default, you can configure one SVI between the MSFC and the ASASM; you can enable multiple SVIs, but be sure you do not misconfigure your network.

The following example shows a typical configuration with multiple SVIs:

Configuring the Switch for ASA Failover

Because both units require the same access to the inside and outside networks, you must assign the same VLANs to both ASASMs on the switch(es). See the “Assigning VLANs to the Secondary ASA Services Module” section.

Adding a Trunk Between a Primary Switch and Secondary Switch

If you are using inter-switch failover, then you should configure an 802.1Q VLAN trunk between the two switches to carry the failover and state links. The trunk should have QoS enabled so that failover VLAN packets, which have a CoS value of 5 (higher priority), are treated with higher priority in these ports.

To configure the EtherChannel and trunk, see the documentation for your switch.

To avoid loops when you use failover in transparent mode, use switch software that supports BPDU forwarding. Do not enable LoopGuard globally on the switch if the ASASM is in transparent mode. LoopGuard is automatically applied to the internal EtherChannel between the switch and the ASASM, so after a failover and a failback, LoopGuard causes the secondary unit to be disconnected because the EtherChannel goes into the err-disable state.

The supervisor engine can send autostate messages to the ASASM about the status of physical interfaces associated with ASASM VLANs. For example, when all physical interfaces associated with a VLAN go down, the autostate message tells the ASASM that the VLAN is down. This information lets the ASASM declare the VLAN as down, bypassing the interface monitoring tests normally required for determining which side suffered a link failure. Autostate messaging provides a dramatic improvement in the time the ASASM takes to detect a link failure (a few milliseconds as compared to up to 45 seconds without autostate support).

The switch supervisor sends an autostate message to the ASASM when:

The following is sample output from the hw-module module reset command:

To monitor the ASA, enter one of the following commands:

The following is sample output from the show firewall module [ mod-num ] state command:

The following is sample output from the show firewall module [ mod-num ] traffic command:

The following is sample output from the show firewall multiple-vlan-interfaces command:

The following is sample output from the show firewall module command:

The following is sample output from the show firewall module [ mod-num ] version command:

The following is sample output from the show firewall vlan-group command:

The following is sample output from the show interface vlan command:

Table 2-1 lists each feature change and the platform release in which it was implemented.