The route processor (RP) card performs the route processing in the Cisco CRS-1and CRS-3 routing systems and distributes forwarding tables to the MSCs. The RP provides a control path to each MSC, performs system-monitoring functions and contains hard disks for system and error logging.

Although each line card chassis contains two RP cards, only one RP is active at a time. The other RP operates in standby mode, ready to assume control if the active RP fails. See the “Route Processor Active and Standby Arbitration” section for information on how the system determines which RP is active and which is standby. As of Cisco IOS XR release 3.3.0, the RP and RP-B in tandem for active and standby modes (or vice versa) are supported on the one routing system chassis.

Figure 6-1 is a simple block diagram of an RP card. The dotted lines indicate distinct RP modules, such as the CPU and memory controller (MEM CTL), and the “to fabric” and “from fabric” sections. 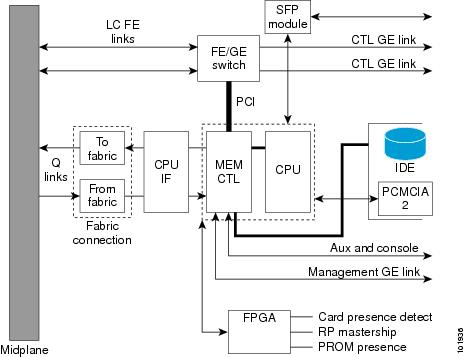 The main components of the RP card are listed here and described in the following sections:

As shown in Figure 6-1, the RP mates with the LCC midplane. The RP connects to the switch fabric through two fabric interface modules (from fabric and to fabric) that are similar to the fabric interface of the MSC (see the “MSC To Fabric Section and Queuing” section).

The RP hard drive (Figure 6-2) is an IDE hard disk used to gather debugging information, such as core dumps from the RP or MSCs. The hard drive is typically powered down and activated only when there is a need to store data. A hard disk is always provided as part of the RP, but may be removed from the board if necessary (under the direction of Cisco technical support).

The RP card supports two PCMCIA flash cards that each provide up to 2GB or 4GB of flash storage. One of the PCMCIA flash subsystems is accessible externally and removable, and allows you to transfer images and configurations by plugging in a PCMCIA flash card. The other flash subsystem is fixed to the RP and is not removable, and is for permanent storage of configurations and images. Figure 6-3 shows the location of the externally accessible PCMCIA slot on the RP card front panel.

The CONSOLE and AUX ports are RJ-45 serial connectors that have the following pinouts:

The two RPs in an LCC operate in an active-standby relationship. Only one RP is active at a time. The other RP operates in standby mode, ready to assume control if the active RP fails.

The routing system performs the following steps to determine which RP is active and which is standby:

At chassis power up, each RP boots its board components and runs self-tests.

The RPs exchange messages with each other and with the service processors (SPs) on all other boards. Each RP examines its outgoing “Reset” lines to verify that they are inactive.

Software on each RP reads its Active signal, and branches accordingly to Primary or Standby code.

If the active RP is removed, powered down, or voluntarily disables its Ready signal, the standby RP becomes active after receiving an asserted Active signal, along with an interrupt.

The route processor card can be configured with 2GB or 4GB of memory.

Figure 6-4 shows the Cisco CRS routing system RP card. The RP card plugs into the chassis in the center of the lower PLIM card cage, on the front side of the midplane (see Figure 1-5).

A DRP runs any of the routing processes that run on the RP (for example, BGP, OSPF, IS-IS, MPLS, LDP, IP multicast, and so on). You issue software commands to specify which processes are to run on the DRP instead of the RP. This action of assigning processes to a DRP is called process placement . By offloading processor-intensive routing tasks (such as BGP speakers and IS-IS) from the RP to the DRP, you can improve system performance.

The DRP does not perform any of the control and management functions performed by the RP; therefore, it can never be the designated shelf controller (DSC) in a multishelf system. However, the DRP can be configured as the designated logical router shelf controller (dLRSC) in a logical router. A logical router is a part of the Cisco CRS Series routing system that functions as a complete router, running its own routing protocols and forwarding IP packets between its interfaces.

See the “Limitations and Restrictions” section for information about the limitations of the DRP that apply to this release.

The following sections describe the DRP card and the DRP PLIM. Throughout these sections, unless otherwise noted, DRP refers to both the DRP and its associated PLIM.

The DRP card (CRS-DRP) is an optional component that enhances Cisco CRS Series routing capabilities by serving as an additional route processor in the system. The DRP can be installed in any MSC (line card) slot in the line card chassis. The corresponding DRP PLIM is installed in the corresponding PLIM slot. The cards are connected to each other through the chassis midplane.

The main components of the DRP are:

Two FabricQ ASICs—Receive cells from the switch fabric, reorder the cells and reassemble them into packets, and queue the packets for transmission to the CPUCTRL ASICs. The FabricQ ASICs are part of the Rx path on the DRP. Each FabricQ ASIC is connected to a different CPUCTRL ASIC.

IngressQ ASIC—Receives data packets from the SMP, segments the packets into cells, and distributes the cells to the switch fabric. The ASIC is part of the Tx path on the DRP. The module has connections to both SMPs, but only one SMP controls the IngressQ ASIC at any time. By default, SMP0 controls the ASIC at startup.

The IngressQ ASIC has a memory buffer for storing packets. This buffer storage provides input rate-shaping queues for shaping switch-bound traffic. Input rate shaping is used to provide bandwidth and QoS guarantees for physical and logical port traffic and to smooth traffic bursts into the switch fabric.

The Console, Aux, and Ethernet management ports for the DRP card are located on the DRP PLIM. (See Figure 6-7.)

The DRP PLIM, or DRP front-access panel (CRS-DRP-ACC), provides access to the DRP card for configuration and system management. The DRP PLIM contains the CONSOLE, AUX, and Ethernet management ports (MGMT ETH) for the DRP and an alphanumeric LED that shows operational status.

The DRP PLIM is installed in the PLIM slot that corresponds to the MSC slot in which the associated DRP card is installed.

Figure 6-7 shows the front panel of the DRP PLIM.

The Performance Route Processor (PRP) is also available for the LCC. The PRP provides enhanced performance for both route processing and system controller functionality.

Two PRP cards are required per chassis for a redundant system. The PRP can be inserted in either of the two dedicated RP slots in the LCC. When two PRPs are installed, one PRP is the “Active” RP and the other is the “Standby” RP.

The PRP has the following physical characteristics:

Figure 6-9 shows the front panel of the PRP card.

The CRS PRP for the LCC is a next generation Intel-based RP that increases the CPU compute power, memory and storage capacity. The PRP provides both route processing and system controller functionality for enhanced performance.

A CPU interface and system control ASIC provides resources and communication paths between the CPU and the rest of the system to provide line card management, configuration, monitoring, protocol control, and exception packet handling. The fabric queuing portion of this ASIC acts as the fabric interface to handle the traffic to the fabric. Traffic from the fabric is handled by the ingress queuing portion of an interface bridging FPGA.

Figure 6-10 shows a block diagram of the PRP card. 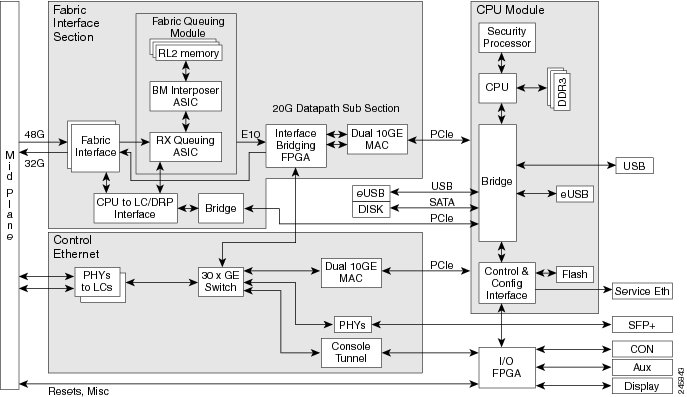 The following memory configurations are supported by the CPU memory controller:

The PRP front panel includes an OIR pushbutton (see item 1 in Figure 6-9). Pressing the OIR button initiates the OIR process and avoids the loss of card information caused by a surprise extraction.

If for some reason the OIR process cannot be completed, the OIR Ready LED will continue blinking. If this occurs, you should check the log and console messages for a failure reason.

If the card is not removed within five minutes, the PRP resets itself and the OIR Ready LED will stop glowing.

The OIR process operates as described even if the PRP is not in a redundant configuration or if the standby PRP is not ready.

PRP functions include a Service Ethernet feature that enhances serviceability and troubleshooting of the system. The Service Ethernet RJ45 port provides a backdoor mechanism into the PRP if the main CPU subsystem is stuck and cannot be recovered.

Through the Service Ethernet connection, you can perform the follow functions:

The PRP has an external USB port on the faceplate for connecting a USB 2.0 thumb flash drive. The external devices connected to this port can be used for logging, external file transfer, and installing software packages.