This chapter describes the components that make up the cooling system of the Cisco CRS Series Enhanced 16-Slot Line Card Chassis (LCC). It contains the following sections:

The airflow through the LCC is controlled by a push-pull configuration. As shown in Figure 3-1, ambient air flows in at the bottom front of the LCC and up through the card cages until it exhausts at the top rear. The bottom fan tray pulls ambient air in from the bottom front of the chassis; the top fan tray pushes warm air out the back of the chassis. The power modules in the power shelves have their own self-contained cooling fans.

A replaceable air filter is positioned above the lower fan tray. How often the air filter should be replaced depends on the facility environment. In a dirty environment, or when you start getting frequent temperature alarms, you should always check the intake grills for debris and the air filter to see if it needs replacement.

Figure 3-1 Airflow Through the FCC

The chassis has a replaceable air filter mounted in a slide-out tray above the lower fan tray. The filter, shown in Figure 3-2 , plugs into the rear (MSC) side of the chassis. The fan control software and related circuitry varies the DC input voltage to individual fans to control their speed. This increases or decreases the airflow needed to keep the line card chassis operating in a desired temperature range. The chassis cooling system uses multiple fan speeds to optimize cooling, acoustics, and power consumption. There are four normal operating fan-speeds and one high-speed setting used when a fan tray has failed.

Local thermal sensors (on individual cards) monitor temperatures and generate a thermal alarm when the cooling system is not cooling properly. A temperature sensor might trip in response to elevated ambient air temperature, a clogged air filter or other airflow blockage, or a combination of these causes. A fan failure causes a fault message, but if no thermal sensors have tripped, the fan control remains unchanged.

When a thermal sensor trips, the fan control software tries to resolve the problem (for example, by increasing fan speed). The software performs a series of steps to prevent chassis components from getting anywhere near reliability-reducing, chip-destroying temperatures. If the fault continues, the software shuts down the card or module to save components.

The fan controller cards and fan trays have a quick-shutdown mode that kills power when a card or fan tray is disengaged from the chassis midplane. The quick-shutdown mode minimizes inrush current during a hot swap or OIR. In normal maintenance conditions, the software gracefully shut downs the power to the failed part, allowing ample time for capacitors to discharge.

One of the main features of the LCC cooling system is a fully redundant fan control architecture. This architecture, which systematically controls the speed of the fans for various chassis-heating conditions, is redundant from both a power standpoint and a cooling standpoint.

The chassis is designed to run with both fan trays in place.

In a fully redundant system, equipped with dual power feeds, dual timing cards, and dual fan trays, the cooling system can withstand the failure of any one of the of the following components and still continue to properly cool the chassis:

In the single-failure cases described in this section, the rotational speed of the remaining operational fans changes automatically according to the cooling needs of the chassis.

A double-fault fan failure involves two fan trays, two fan tray boards, two fan controller cards, two power shelves, two power modules, or any combination of two of these components. When a double-fault failure occurs, the system can automatically power down individual cards if the cooling power is insufficient to maintain them. The chassis remains powered on unless both fan trays have failed or thermal alarms indicate a problem serious enough to power down the entire chassis

For information on the rotational speeds of the fans in revolutions per minute (RPM), see the “Fan Tray” section.

The LCC has redundant fan trays (upper and lower), which are inserted from the rear side of the chassis. Each fan tray is hot swappable and is considered an FRU. Although the chassis can operate with one fan tray, both fan trays should be installed and working during normal operations.

Each fan tray is populated with nine PWM fans. The fans are controlled through a digital signal and are internally able to correct any variation in setting fan speed. Operating fan speed range is from 3300 up to 9000 RPM with a 5% tolerance.

Yellow—The fan tray has experienced a failure and should be replaced.

Off—An unknown state exists or the LED is faulty.

The fan tray has the following physical characteristics:

During normal operation, the fans operate in the range of 3300 to 5150 RPM. The system automatically adjusts the speed of the fans to meet the cooling needs of the entire chassis. If one fan controller card or one power feed fails, the fans continue to operate within the ranges specified above (up to 5150 RPM). If one fan tray fails completely, or is removed, the fans in the remaining fan tray automatically speed up to the maximum rotational limit.

The LCC contains two fan controller cards, shown in Figure 3-4. Each controls one or both fan trays. 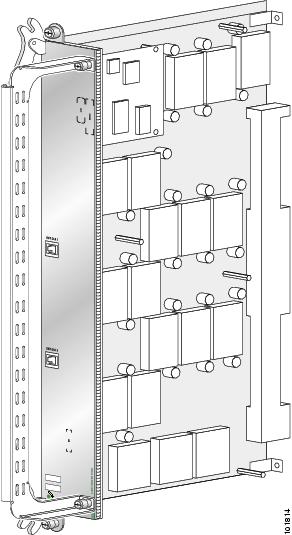