This chapter describes how WAE Design models multi-AS networks and simulates basic BGP routing. WAE Design does not directly emulate BGP routing configurations, such as local prefs and MEDs. Rather, it provides a high-level modeling of typical peering policies, such as standard customer, transit, and settlement-free arrangements for service providers. This model enables you to quickly and easily evaluate the effects of peering locations and basic policy variations.

Internal and External AS Types

To model a multi-AS network, each node is assigned an AS, and each AS is defined as either internal or external. A typical multi-AS model in WAE Design consists of the following.

Thus, generally, there are a large number of external AS’s in the plan file, but usually only one or a small number of internal AS’s. All nodes in an external AS are typically placed in the same site, although you can place them in any site. Figure 15-1 shows an example model with two internal AS’s and four external AS’s. 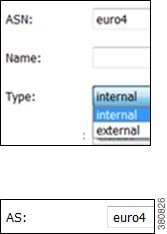 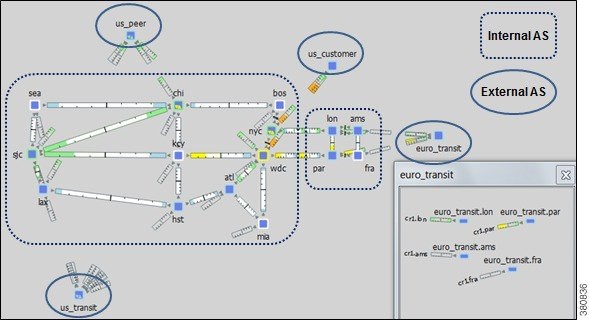 WAE Design routes within an AS, to and from the border exit point, are determined by the IGP protocols. The selection of border exit point is modeled by the Routing Policy, which is set to either Shortest Exit or Respect MEDs. This property is set in the Edit AS Relationships dialog box, which is accessed through the AS Properties dialog box. 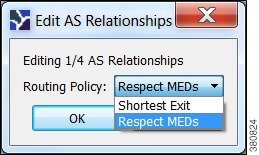 Figure 15-2 shows these modeled as two internal AS’s: AS A and AS B. The same demand (A1 to B4) is routed using each of the two different routing policies.

Routes Between External and Internal AS’s

Table 15-1 lists typical routing configurations that can be constructed by applying different combinations of Routing Policies for traffic in both directions between two AS's.

The AS that controls the routing is determined by the AS type, direction of the demand, and the Routing Policy property as described in Table 15-2 .

Two AS’s can be in one of four different routing relationships to one another, depending on which of the two routing policies is chosen in each direction ( Table 15-3 ).

An external mesh consists of two or more external AS’s with a Type property of External. An internal AS typically restricts advertisement of BGP routes for some external AS’s to other external AS’s. For example, destinations reachable through the transit network would not be advertised to a peer, or vice versa. In WAE Design, these restrictions are represented by the absence of demands between the two external AS’s.

The External Mesh property is set in the AS Properties dialog box.

For internal AS’s, the External Mesh property is ignored. More complex route advertisement policies cannot be represented by these simple External Mesh settings. In this case, demand mesh creation must be performed in several steps, possibly using a script and the dmd_mesh_creator CLI tool. 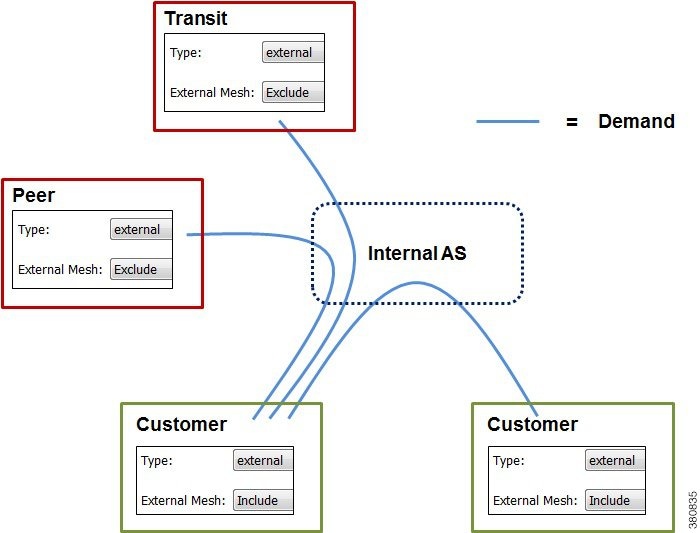 As with all WAE Design simulations, AS routing uses demands. An IP simulation for a particular failure scenario and traffic level performs these steps.

Interface utilizations are calculated from the demand traffic using the specified traffic level.

WAE Design allows routes to be calculated between selected nodes even if no demands are present. In this case, only the first step applies.

BGP demands do not failover between external AS’s. That is, all traffic to or from an external AS behaves the same under peering failures to an external AS. You can change this default behavior using external endpoints to simulate specific external AS nodes where traffic goes in and out of the network, as well as set priorities so that if one traffic source or destination goes down, the traffic can still be sourced from or delivered to another external AS node.

WAE Design models the nodes in external AS’s that are directly connected, for example through eBGP, to nodes in internal AS’s. One exception is that you can model BGP multihops by setting the node Type property to psn (pseudonode), such as might occur at a peering exchange. This pseudonode can represent the switch that connects a number of external AS nodes to the same internal AS node. In this instance, multiple external AS nodes are connected by circuits to a BGP psn node, and this node is connected to a node in the internal AS.

In all cases, eBGP multipaths across parallel border circuits is assumed. 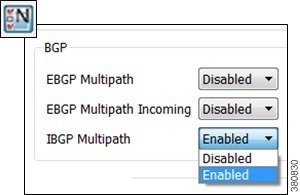 For each BGP multipath option that you want enabled, select Enabled, and then click OK.

WAE Design does not have an explicit next-hop self setting so it simulates paths as if next-hop self is off. That is, the IGP metric of the egress peering interface is included in the IGP distance to the peering router and is used in the iBGP path selection. However, next-hop self to an external AS can effectively be simulated by setting the metrics on all egress interfaces to that external AS to 0. (You can set the IGP metric in either the Interfaces Properties or Circuit Properties dialog box accessed through the context menu.)

A plan file created through WAE Collector BGP discovery typically has more external AS’s in the plot than you are interested in viewing or simulating. Some AS’s might have very low traffic levels and others might have only one circuit connecting into the internal AS. You can trim these unwanted AS’s to simplify the network. Trimming removes the AS from the plan file, but retains the traffic in and out of the AS for simulation. That is, its interface traffic is still included in the total traffic of connected nodes.

Typically, plan files are trimmed before demands are created. However, you can optionally trim demands in a plan file. If any demand is sourced from a trimmed external AS, the demand source is moved to the first hop on the demand path in the remaining network. Likewise, if a demand has a destination that is a trimmed external AS, the demand destination is moved to the last hop in the remaining network. If two or more demands in the same service class are trimmed so that their resulting source and destination nodes are equal, these demands are aggregated into one demand with their traffic summed. Demands split by ECMPs are converted into multiple demands, each with traffic divided proportionally to the split ECMP.

Note that multicast demands are removed, and cannot be trimmed.

Select one or more AS’s to trim from the AS table.

Right-click one of the selected AS’s and select Trim from the context menu.

By default, the moved demands are named “Trimmed,” though you can enter a different name.

Follow these steps to create an empty AS. After creating the AS, you still need to associate nodes with it and create the relationship between this AS and others. See Associate Nodes with an AS and Edit AS Routing Policies, respectively.

Either select the Insert->AS menu, or right-click in the empty plot and select New->AS. The AS Properties dialog box appears.

Configure the AS properties.

The change the routing policy, click Edit AS Relationships. (The default is Respect MEDs.) For information on how these options affect simulation, see the Route Selection between Internal AS’s section.

Associate Nodes with an AS

Select one ore more nodes, and double-click any on of them to open a node Properties dialog box. 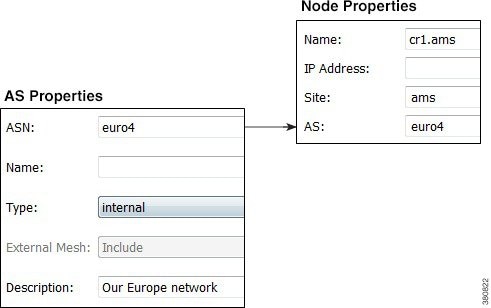 In the drop-down AS list, select the AS to which you want to assign the nodes. Then click OK.

Select one or more AS’s from the AS table.

Select the AS pair that you want to configure. There is a separate line for each direction in the relationship so you can configure them independently.

WAE Design can assign names to ASNs by looking them up in the $CARIDEN_HOME/etc/ASNs.txt file. This file contains a list of all assigned ASNs with their names and descriptions.

Select one or more AS’s from the AS table. If no AS’s are selected, names are assigned to all AS’s in the plan.

To assign names only if the ASN does not have one, select the “Only those with blank Name fields” option. Then click OK.