To model basic IGP routing, demands are sourced or destined for nodes within the topology. To model basic inter-AS routing, the sources and destinations are neighboring external AS’s, or a combination of the external AS and the peering node in that AS. However, more complex routing situations require the use of external endpoints as the source or destination. External endpoints can contain multiple member nodes and AS's, and you can specify when traffic enters or exits from each of them individually. This allows you to simulate routing within and between AS’s where multiple traffic entry and exit points are used simultaneously. You can also prioritize where the traffic fails over to other nodes and AS’s.

There are numerous use cases both for IGP and inter-AS routing.

An external endpoint is a WAE Design object that identifies specific entry (source) or exit (destination) points for demands. These are identified in the External Endpoints table by a name and an optional Tag property.

Each member is assigned properties that prioritize traffic entering and exiting that member, in what order to failover to another member, and how to distribute traffic for members of equal priority. These properties are set when you create the member (in its Properties dialog box), and all members are listed in the External Endpoint Members table. 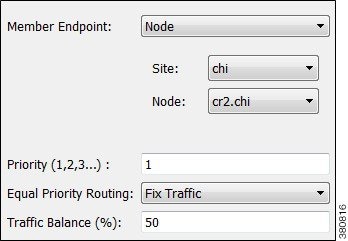 Shortest Path—Use the member that results in the use of shortest path between source and destination.

If a member is using a shortest path, an “na” shows in the Traffic Balance (%) column in the External Endpoint Members table.

Fix Traffic—Set the traffic across members of equal priority as defined in the Traffic Balance (%) field.

Deduce Traffic—Behaves the same as Fix Traffic in that it sets traffic across members of equal priority as defined in the Traffic Balance (%) field. However, upon running Demand Deduction, the Traffic Balance (%) field is updated based on the measured traffic in the network. Note that Demand Deduction only estimates the traffic balances for external endpoints with a priority that is in use in the current no-failure simulation. Thus, Deduce Traffic is usually set to Priority 1.

Members with the highest priority (lowest number) are used as the demand’s source. For example, if the external endpoint has two members with a priority of 1, the demand is sourced from both members provided they are available.

If one or more of the members are not available, the traffic from the unavailable members is evenly redistributed to the other top priority members.

Note that if a failure occurs that does not affect the external endpoint member’s ability to send or receive traffic, then traffic is rerouted as usual without a need to use the additional members.

The traffic distribution through these demands is based on the Equal Priority Routing property, and if applicable, the Traffic Balance (%) property used to define the external endpoint members.

If the Traffic Balance percentages across sources with the same priority sum to less than 100%, the overall demand traffic is decreased to that percentage.

If an external endpoint member of the same priority fails, the traffic on the remaining members increases in proportion, so that the same amount of traffic is still routed.

If all three priority 2 members fail, then 1000 Mbps is routed through node E, which is the priority 3 member (Figure 16-1). This example demonstrates servers that cache content for customers in Kansas City (cr1.kcy). The primary server is located in San Jose (cr1.sjc), with backup servers in Mountain View (cr1.mtv) and Palo Alto (cr1.paa). Each of the servers is a member of an external endpoint (sjc_server) that is used as the source of the demand to cr1.kcy. 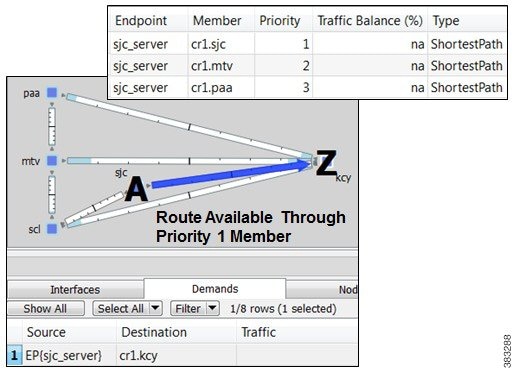 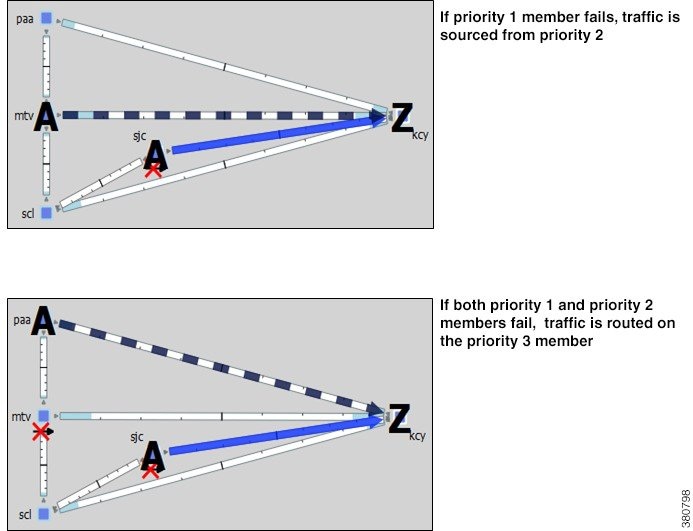 One method of modeling an external demand source with multiple entry points is to construct an edge node, connecting it to these entry points, and giving the interfaces equal metrics. Then source the demand from this edge node.

Alternatively, you can construct these multiple entry points using a single external endpoint as the demand source, thus reducing the complexity of the topology.

In this example, a demand has an external source with two entry points that come into the network at Chicago. Figure 16-3 demonstrates two ways to model this source. One uses additional topology (edge node) to source the demand. The other uses a single external endpoint that has two members (cr1.chi and cr2.chi), both set to priority 1 with shortest path traffic. 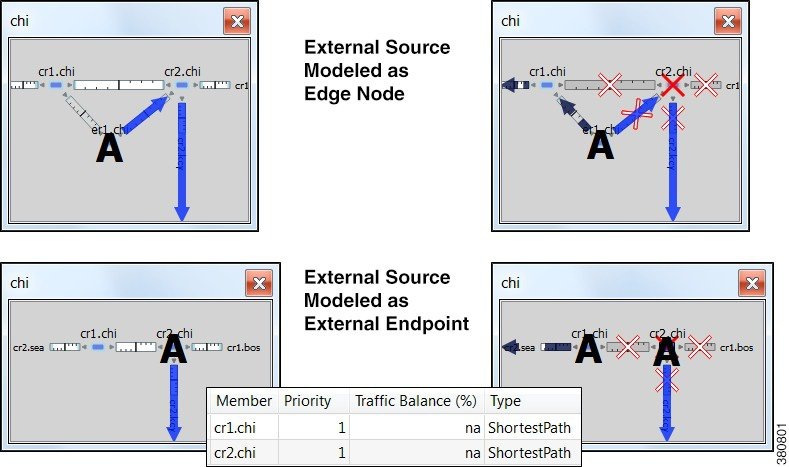 Failover to Nodes in External AS’s

This example demonstrates a content provider (Acme) who has most of its incoming Internet traffic sourced through a transit provider, and this traffic is then distributed to Acme’s customers. Acme has identified specific policies for each market using communities, and these policies determine, per location, which transit provider peering points are used for primary routing and failover. The network is set up as follows (Figure 16-4). 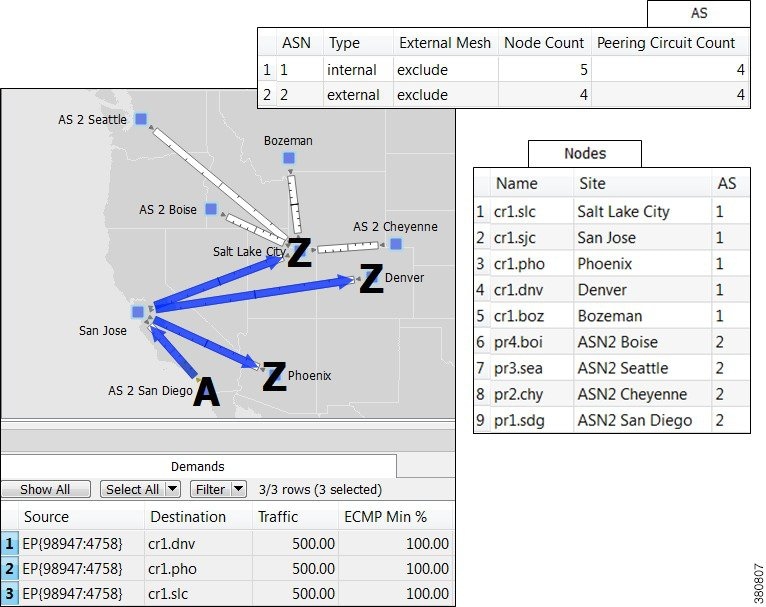 In WAE Design, Acme uses an external endpoint named after community 98947:4758. It contains the following members, all of which are in the same AS 2 transit provider.

As Figure 16-4 shows, multiple demands are created using this external endpoint (98947:4758) as the source, and each sending traffic to a different customer destination. Figure 16-5 focuses on the traffic destined for Denver (cr1.dnv), showing that the failover scenario behaves as follows.

Figure 16-5 Example Failover Within the Same External AS 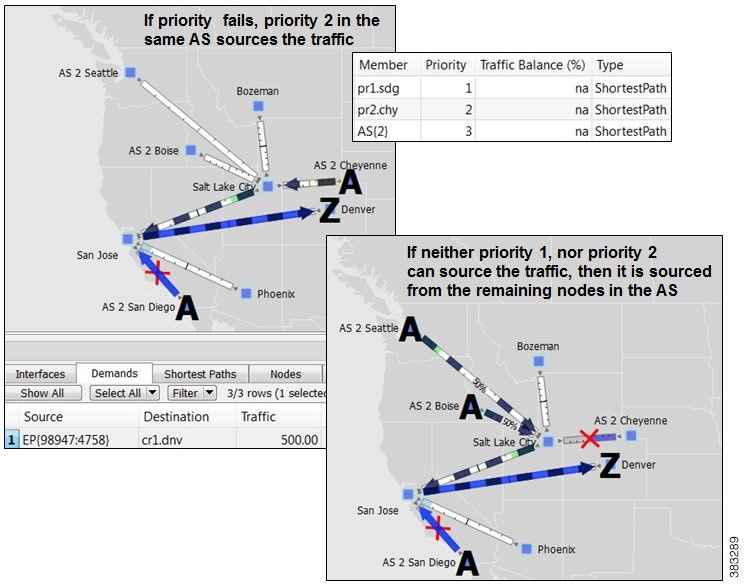 Failover from an External AS to Another

In this example, a small ISP (AcmeNet) buys transit from two other service providers. AcmeNet peers with AS 2 in Phoenix and AS 3 in Denver. AcmeNet has a customer base in Phoenix (cr1.pho). The customer has a preferred access to the Internet through the San Francisco (pr1.sfo) in AS 2 (Figure 16-6), and the secondary access is through Denver (pr2.dnv) in AS 3 (Figure 16-7). In WAE Design, AcmeNet simulates this network by creating an external endpoint (Internet) containing two different external AS’s as members.

The demand is sourced from this external endpoint named Internet. 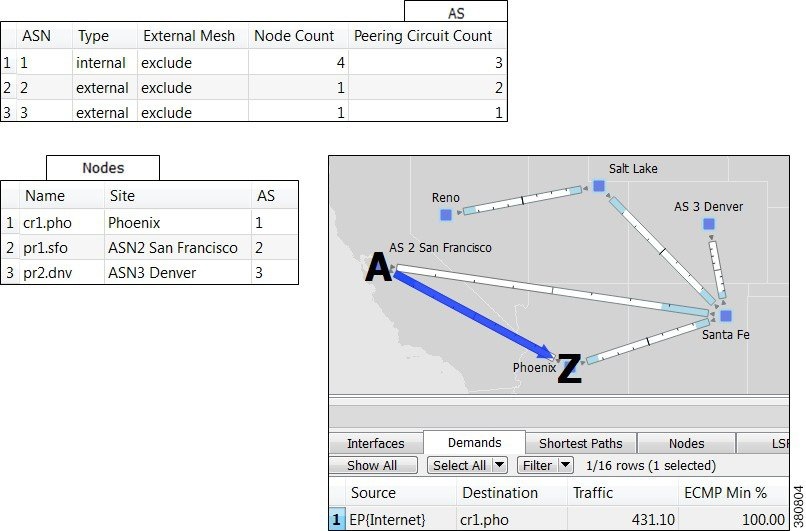 Figure 16-7 Example Failover to a Different External AS 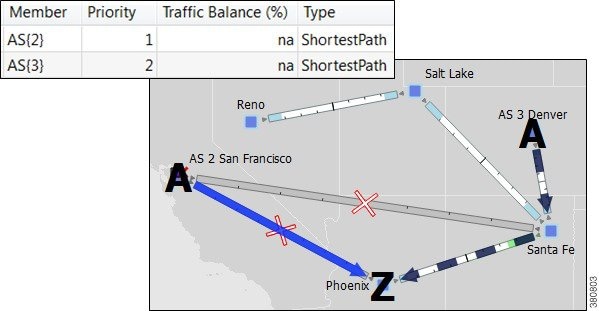 Create External Endpoints and Their Members

To edit existing external endpoints, double-click it from the External Endpoints table.

Enter a unique external endpoint name in the Name field.

To add a new member, click the New button.

To edit an existing member, select it from the Members table and click Edit. Select the member type as node or external AS.

For nodes, select its site and node name.

For interfaces, select its site, node, and the interface. Using an interface enables you to specify the exact interface on which the demand traffic is going into or out of a node.

For information on how the following external endpoint member fields affect routing, see the Routing with External Endpoints section.

Enter a priority number to determine the sequence in which the member is used with other members in this external endpoint. Multiple members can have the same priority.

Select whether to use a shortest path route, or to direct a specified percentage of traffic across members that have the same priority (Fix Traffic or Deduce Traffic).

If balancing traffic, enter the percentage of traffic this member should route.

If you set Deduce Traffic, this value is updated by Demand Deduction provided there are no members with a higher priority that are in use under normal (non-failure) operation.