WAE Design network simulations calculate demand routings and traffic distributions through the network based on the given traffic demand, network topology, configuration, and state. Simulation is the fundamental capability of WAE Design on which most of the other tools are built, including those for planning, traffic engineering, and worst-case failure analysis. A number of protocols and models are supported, including IGP, MPLS RSVP-TE, BGP, QoS, VPNs, Multicast, and Layer 1 (L1).

This chapter focuses on the general features of WAE Design simulations. The individual protocols and models are described in their respective chapters.

WAE Design uses demands to simulate traffic between source and destination endpoints within a network. Each demand has a specified amount of traffic.

By default, an up-to-date simulation of an open plan is always available. Any change in the plan that affects or invalidates the current simulation automatically triggers a resimulation. Types of changes that result in re-simulations are those that would typically affect routing in a network.

To toggle automatic resimulation on and off, follow one of these two steps.

The state of an object affects simulation and determines whether an object is operational.

The Failed and Active columns in the tables show a visual representation of their status. Likewise, you can show the Operational column to show the calculated operational state. In each column, T means the object is in that state and F means it is not. Note that the T or F for Active state in the Interfaces table is reflective of the associated circuit. The plot shows graphical representations of these states with crosses of various colors and fills.

The quickest way to see the effects of failures in a Simulated Traffic view is to have demands in place and then fail an object. The plot immediately displays where the traffic increases as a result (Figure 6-1), and the Util Sim column in the Interfaces table reflects the traffic changes. Demands are then rerouted around the failure (Figure 6-2).

You can simultaneously fail one or more objects of the same type. If you select an interface to fail, you are actually failing its associated circuit. 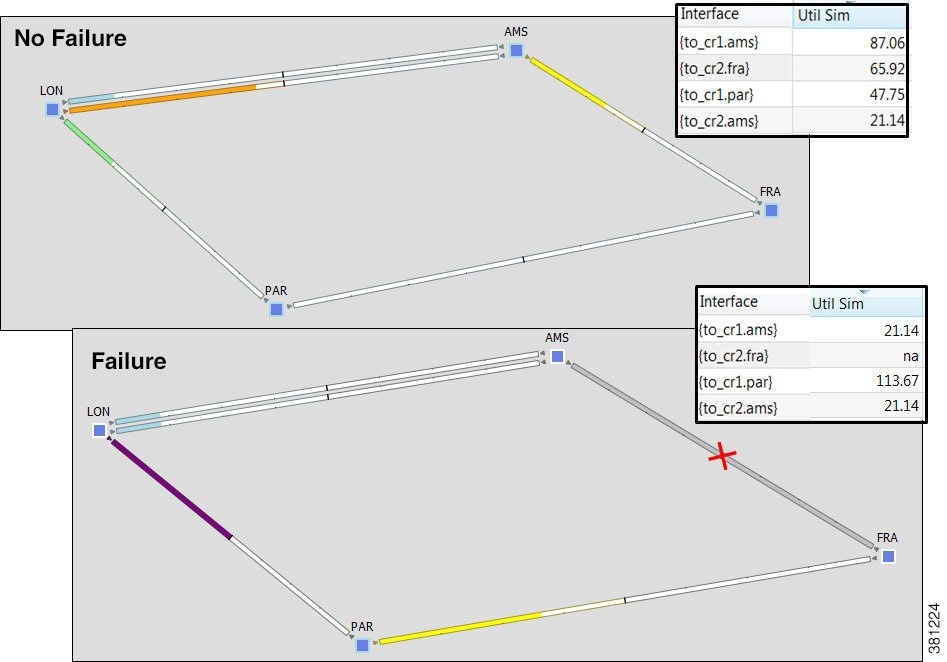 You can protect circuits from being included in SRLG failures and SRLG worst-case analysis, though there are differences in behavior, as follows.

Note that this setting has no effect on how FRR SRLGs are routed. For information on FRR SRLGs, see the RSVP-TE Simulation chapter.

Set the Protected property for circuits.

Select one or more circuits.

Right-click a selected circuit, and select Properties from the context menu.

Select the option to exclude protected circuits from SRLG failures, and click OK.

An active/inactive state identifies whether an object is available for measured or simulated traffic calculations. An object can be inactive for one of three reasons.

Like failures, changing an object from active to inactive immediately affects how demands are routed, and affects the Util Sim column in the Interfaces tables (Figure 6-3). 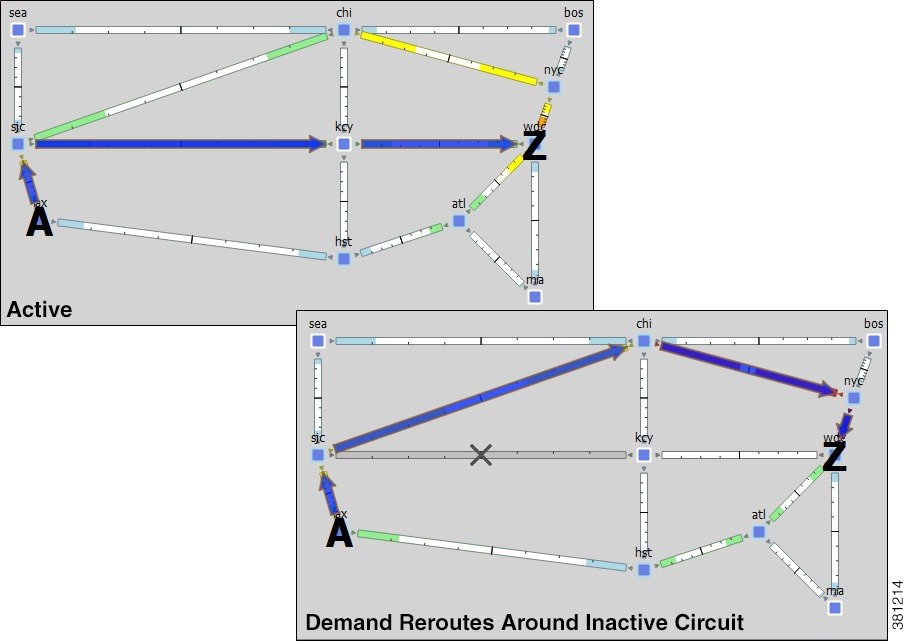 Right-click one or more like objects from their respective tables. The Properties dialog box appears.

Click the Active check box to toggle it on or off. A check mark means the object is active. Then click OK.

The Capacity column displays the configured physical capacity of interfaces, circuits, ports, and port circuits. Each circuit, port, and port circuit has a physical capacity that you can set in the Capacity field of the Properties dialog box. The interfaces have a configurable capacity that you can set in the Configured Capacity field. From these properties, a simulated capacity (Capacity Sim) is derived for each object.

If a pair of ports is considered in Capacity Sim calculations, both must be operational to be considered.

All WAE Design delay calculations that use the L3 circuit delay, such as Metric Optimization, use the Delay Sim value.

For more information on the delay and distance of L1 objects, see the Layer 1 Simulation chapter.

Following is the default behavior for the Latency and Distance Initializer. Note that if there are no Longitude and Latitude available for use by the initializer, The Distance and Delay properties are set to zero.

The current L1 circuits Delay and Distance properties are removed unless the “Keep existing distances if available” option is selected.

The L1 node and L1 waypoint Longitude and Latitude properties are used to estimate the L1 distances. If an L1 node does not have these properties set, the shortest distance calculation is based these same properties of its immediate parent site, if applicable. (L1 nodes are not required to have parent sites.) The L1 link delays are calculated from these distances.

Each L1 circuit path’s Distance Sim and Delay Sim columns are calculated as the sum of the distances and delays of L1 links over which the L1 circuit path is routed.

L3 circuit delays and distances are inherited from L1 circuits if there are L1 circuits mapped to the L3 circuits. Otherwise, the L3 delay and distance are estimated using the shortest distance between nodes at the endpoints of the circuits. If a node does not have Longitude and Latitude properties, the calculation is based on these same properties of its immediate parent site, if applicable. (Nodes are not required to have parent sites.) Thus, if you have an L1 model, the delays and distances are more precise because the physical paths that the L3 circuits take are known.

If this option is unchecked, set r equal to d.

This initializer can act on two different selected object types (L1 links and L3 circuits), so the defaults for the dialog box differ, depending both on selections and on how you access it. Regardless of the method, you can modify your selection options once the dialog box is opened. Following are guidelines for having the dialog box open with the most desirable defaults.

In each section, Layer 1 and Layer 3, verify or change your selection to act on the desired objects. 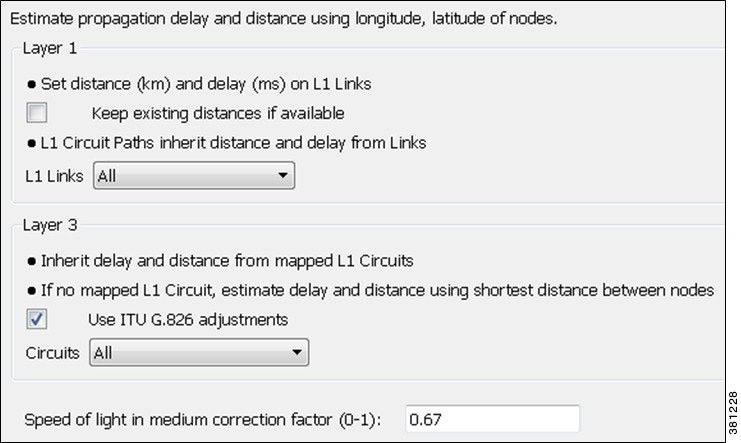 Verify the inclusion ITU G.826 adjustments in the calculation, which is the default and which is usually left unchanged.

For both L1 links and L3 circuits, verify or change default speed of light factor of 0.67. This is usually left unchanged. Then click OK.