All tests were performed on MacOS 10.14 and a 9800-CL WLC with image version 17.5.1. Some of the OIDs mentioned in this article do not exist on older image versions.

Older AireOS WLCs rely on SNMP as the main protocol for monitor. Majority of the relevant information like client count, number of joined access points, processor and memory usage can be obtained via SNMP query from the tool that monitors, to the WLC.

With 9800 WLC, the focus has been put on telemetry. Telemetry works in a "push" model where WLC sends out relevant information to the server without the need to be queried. Catalyst 9800 still offers SNMP for legacy purposes. Some information can be exclusive to telemetry and some of the OIDs previously available on AireOS are not yet available on 9800.

SNMPv2c is a community-based version of SNMP and all communication between the devices is in clear text. SNMPv3 is the most secure version which offers message integrity checks, authentication and encryption of the packets. SNMPv1 is extremely outdated, but still exists to provide legacy software compatibility. It is not mentioned in this article.

Important: SNMPv2c is enabled by default with community “private” with read+write privileges and community “public” with read-only privileges. It is recommended to remove them and create a new community with a different name.

Log into the web interface of the 9800 WLC. Under Administration > Management > SNMP ensure that SNMP is globally enabled. Under Community Strings all currently configured communities and their permission level are displayed:

Before SNMP V3 user is created, it is required to define an SNMP V3 group. To create a group of users with read+write permission, set the Read View and Write View to v1default. Read only group needs to have Write View empty

Under the SNMP V3 Users tab, you can see all the configured users, their privileges and protocols used for authentication and encryption. Button New allows a creation of a new user.

There are 3 security modes available:

Select SHA as authentication protocol and at least AES-128 as privacy protocol is recommended. 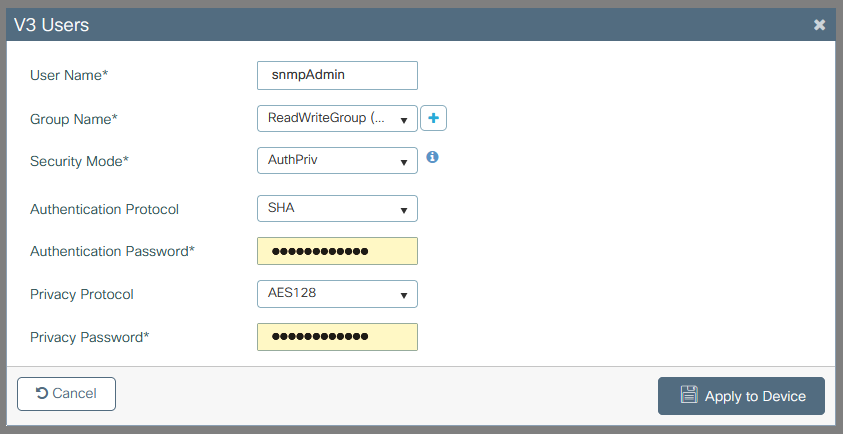 SNMP can also be configured through Command Line Interface (CLI). CLI offers additional configuration parameters, like the ability to assign an access list to the v2 community or v3 user.

Example of an access list that only allows the device on IP address 192.168.10.10 to query the WLC v2 community named "ReadWriteCommunity":

Note: At the time of the write of this document, only standard ACLs are supported. Extended ACLs can be assigned, but they do not work.

What Are Object Names and OIDs?

Object IDs, or OIDs for short, are unique identifiers that represent a certain variable or object. For example, the current processor usage is considered variable which values can be retrieved with the call upon their object ID. Each OID is unique and no two can be the same across the world, quite similar to a MAC address.

These identifiers follow a tree hierarchy, and each OID can be tracked down back to its root. Each vendor has its own branch with a common root.
An analogy could be a home address, where the root would be the country or state, followed by a city zip code, the street, and finally the home number.

The numbers followed by a dot represent each step it takes to get to a certain point in that tree or branch. 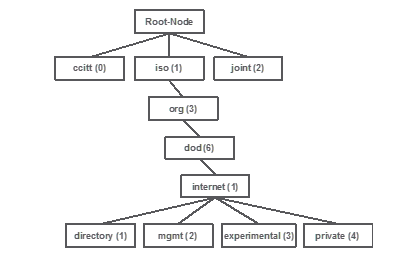 All these values are stored in a Management Information Base, or MIB for short, in each network device. Each identifier has name and a definition (range of possible values, type..).

To load a MIB on your SNMP monitor tool is not required in order to use SNMP and to query a device.

As longs as a valid OID is known, the device responds with the value that is stored in the variable that the OID represents. However, if you load the MIB on your query tool, it provides the benefit of translate the object names to their IDs and allows to know their description. 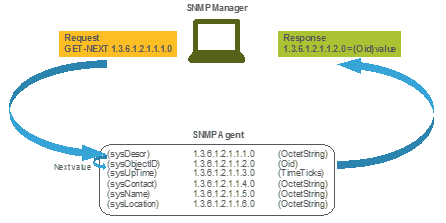 Cisco offers Management Information Base (MIBs) for 9800 WLCs. It is not easily readable, but the MIB contains all available object names and their description.

Downloaded archive file contains multiple .my text files that can either be imported into any third-party SNMP server or simply opened with a text editor. In order to find the OID of a specific object name, you first need to locate the exact file that contains it.

For example, all objects related to monitor the device physical state (like CPU and memory) are located inside a MIB called CISCO-PROCESS-MIB.my.

Here, “cpmCPUMemoryUsed” is the object name which is used to provide the amount of memory used by the WLC in bytes. MIB files all follow similar syntax. Information about the used memory object looks like this:

Most of the third-party software to monitor relies on OIDs, and not object names. Translation between object name and object ID can be done with the usage of Cisco SNMP object navigator tool.

Enter the object name into the search bar. Output provides the OID and a short description. Additionally, same tool can be used to find the object name of the provided OID. 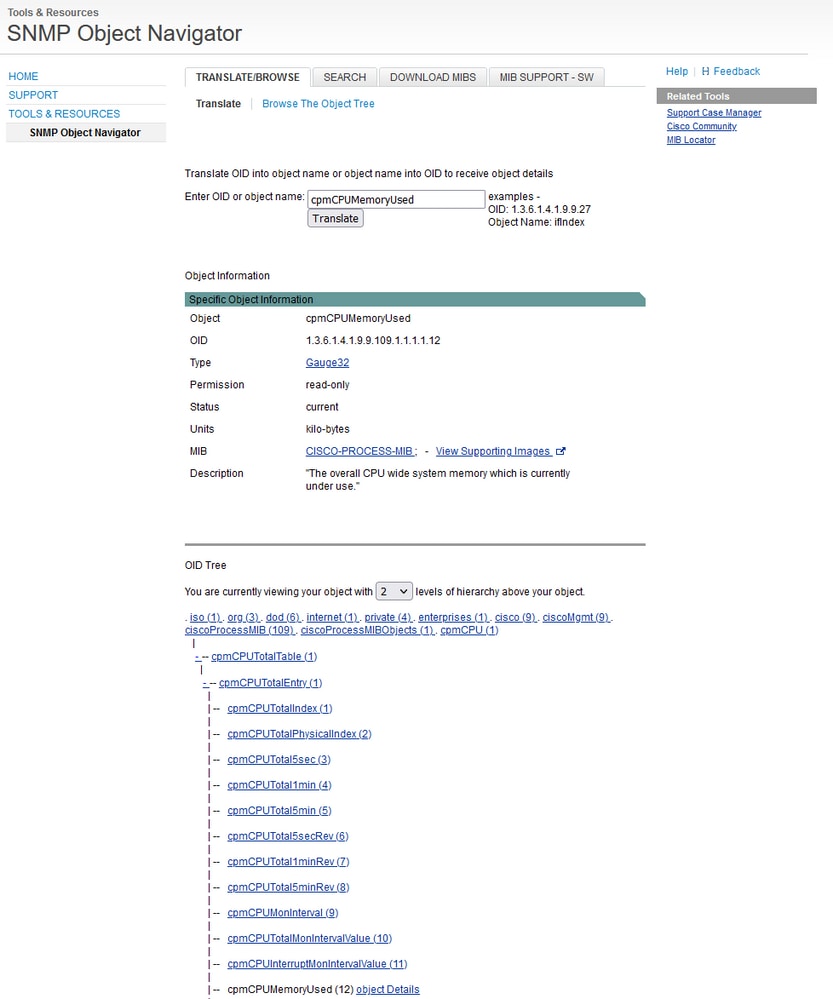 Use OIDs to Monitor the State of WLC

After the acquisition the OID of the object that needs to be monitored, first SNMP query can be executed.

Snmpwalk is an SNMP application that uses SNMP GETNEXT requests to query a network entity for a tree of information. It is present by default on MacOS and most Linux distributions. For SNMPv2c, the command follows the syntax:

If SNMPv3 is used, the command follows the syntax:

Select MD5/SHA and AES/DES based on how you created the SNMPv3 user on the controller.

Monitor via Python3 And pysnmp Library

Code snippets are written for Python 3.9 and utilize pysnmp module (pip install pysnmp) to make SNMP queries for memory utilization of Catalyst 9800-CL WLC. These examples use the same SNMPv2 community and SNMPv3 user created in one of the previous chapters. Simply replace the variable values and integrate the code within your own custom scripts.

Prime Infrastructure comes preloaded with all the OIDs and integration with WLC simply consists in the addition of the WLC credentials to Prime. With 9800 WLCs, Prime mostly relies on Telemetry to collect majority of the details from the WLC, while the small portion of the information is obtained through SNMP.

On the other hand, Cisco WLC can also be integrated with multiple 3rd party solutions for monitor, as long as the OIDs are known.

Programs like Grafana+Prometheus, PRTG Network monitor and SolarWinds server allow the MIBs or OIDs to be imported and values to be displayed in a user-friendly graph.

This integration can require some tweaks on SNMP server side. In this example, the PRTG monitor server is provided with the per core CPU utilization OID which returns the string “0%/1%, 1%/1%, 0%/1%, 0%/1%”. PRTG expects an integer value and raises an error.

Cisco Unified Communications Manager (CUCM) has a Wireless Endpoint Tracking Feature that allows it to approximately track client location based on the AP that the client is connected to. For this feature to work, the CUCM has to pull information from the WLC via SNMP queries.

Important: Many CUCM releases are affected by the Cisco bug ID CSCvv07486 - Unable to sync Access Points in WLC due to SNMP requests too large. This issue is triggered in situations where CUCM runs an affected release and WLC has more than 10 Access Points. Due to the incorrect way that CUCM queries large amount of OIDs in a single bulk request, the WLC either refuses to answer or answers with a tooBig response. The tooBig response is not always sent out immediately and can be delayed. SNMP debugs on WLC print "SNMP: Packet received via UDP from x.x.x.x on VlanXXSrParseV1SnmpMessage: packlet is too large SrDoSnmp: ASN Parse Error".

Table of Most Commonly Monitored OIDs

The table includes some of the most common object names and their OIDs, with the consideration that MIBs present the data in non-user-friendly syntax:

Note: Command "show snmp mib | in <Object name>" can be used to verify if a certain object name is available on 9800 WLC.

Currently there are enhancement requests open to support OIDs of the total number of clients and number of joined access points:

To monitor a standby WLC in High Availability cluster is only possible from the release 17.5.1. Standby WLC can either be monitored directly through RMI or with the query of the active WLC.

Standby WLC can be monitored directly only if WLCs that run in RMI + RP HA type. It is done through the standby Redundancy Management Interface (RMI) IP address of the standby WLC.

In this scenario, only OIDs from IF-MIB are officially supported, which makes it possible only to monitor the state of all the interfaces on the standby WLC. Example output from 9800-CL WLC:

Note: It is expected that the standby WLC Gig 2 port (trunk port used for traffic switching) is in shutdown state. Once failover occurs, the Gig 2 port on the standby WLC comes up. Similar thing occurs with TenGigabit ports on 9800 physical appliances (9800-80, 9800-40 and 9800-CL).