This document describes and provides an overview of all the Cisco IOS® XE features and capabilities leveraged for troubleshooting wireless workflows on Cisco Catalyst 9800 Series Wireless LAN Controllers. It is generic and applies to many usage scenarios.

Cisco IOS® XE running on 9800 WLCs is essentially made up of a Linux Kernel (binOS) with Cisco IOS® and all the wireless processes implemented as daemons. All the process daemons can be bundled under the generic term Control Plane (CP) and are responsible for Control and Provisioning of Access Points (CAPWAP), Mobility, Radio Resource Management (RRM). Rogue Management, Network Mobility Service protocol (NMSP) that are destined to and from the 9800 WLC.

When a packet enters the 9800 WLC from physical ports, if it is determined to be control traffic, it is punted to the corresponding Control Plane Processes. For an AP join, this would be all the capwap and dtls exchange sourced from AP. In case of client join, this would be all the traffic sourced from client until the client goes to RUN state would follow PUNT path.

As the various daemons process the incoming traffic, the resulting return traffic (capwap response, dot11, dot1x, dcp response) sourced from 9800 WLC to be sent to the client is injected back into the data plane to be sent out the physical port. As we process AP joins, client join, mobility exchanges, data plane needs to be programmed so it can handle data traffic forwarding. This occurs with multiple components being programmed sequentially over the programming path indicated in the image.

Cisco IOS® XE provides a versatile tool set to trace the packet from the moment it enters 9800 WLC until the processed traffic leaves the box. The next section introduces these tools along with the commands used to invoke these tools from the command line interface (CLI).

Logs generated by the 9800 WLC is the first means to verify the general health of the system. Any violation of the predefined threshold for system resources like CPU, memory, buffers are reported into the log. Also, any errors generated by any subsystems get written into logs. To view the logs, navigate to Troubleshooting > Syslog

or run the CLI command :

This output shows general logs as well as some wireless-specifics logs. However, contrary to legacy Cisco IOS®, no wireless debugging typically makes its way to this logging output.

Every control plane process on the WLC9800 is constantly logging at logging level of Notice to its own dedicated buffer. This is termed as always-on tracing. This is a unique capability that allows you to get contextual data on a failure that has occurred without mandating the failure condition be reproduced.

For example, if you are familiar with AireOS, for any client connectivity troubleshooting, you would need to enable debugs and reproduce the client connectivity problem state to identify the root cause. With always-on tracing, you can look back to already captured traces and identify if it is common root cause.  Depending on volume of logs generated, we can look back several hours to several days.

Now, while the traces are logged per individual process, it is possible to view them wholistically for a particular context of interest like client mac or AP mac or AP ip address. In order to do so, run the command

In order to view per-process logs, run the command

Note: There are multiple filtering options on these CLIs including module, logging level, start timestamp and so on. To view and explore these options, run the command

To get a quick snapshot of commonly known failure conditions, trace-on-failure capability is available. This parses all the traces on the system at the given point in time to match the predefined failure conditions and presents summary view as well as statistics.

To get a summary view, run the command

To view the predefined failure conditions as well as statistics corresponding to these conditions, run the command

Using client connectivity troubleshooting, as a example, conditional debugging runs for client mac to get end to end view at control plane.

Click Add and enter a client or AP mac address that you want to troubleshoot.  As of 16.12, only mac addresses can be added through the GUI. You can add IP address through CLI.

You can add several mac addresses to track. When you are ready to start the radioactive tracing, click start.

Once started, debug logging are written to disk about any control plane processing related the tracked mac addresses.

When you reproduced the issue you want to troubleshoot, click Stop.

For each mac address debugged, you can generate a log file collating all the logs pertaining to that mac address by clicking Generate.

Chose how long back you want your collated log file to go and hit Apply to Device. 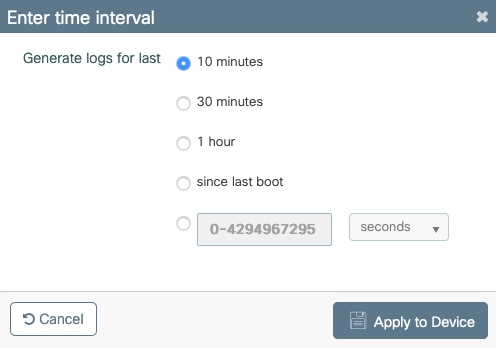 You can now download the file by clicking the small icon next to the file name. This file is present in the bootflash drive of the controller and can also be copied out of the box through CLI.

In order to enable conditional debugging, run the command

To view the currently enabled conditions, run the command

These debugs do not print any output on terminal session but store the debug output file to flash to be retrieved and analyzed after. The file is saved with the naming convention ra_trace_*

Note: debug wireless also allows pointing to an FTP-server and running even more verbose logging using keyword internal. We do not recommend using these at this time, as there are some issues being ironed out.

In order to debug output file on terminal session, run the command

In order to redirect the debug output to an external server for offline analysis, run the command

There is a much more verbose view of the same debug log levels. in order to see this verbose view, run the command

To disable debugging for specific context or before the configured or default monitor time is up, run the command.

Caution: The conditional debugging enables debug level logging which in turn increases volume of the logs generated. Leaving this running reduces how far back in time you can view logs from. So, it is recommended to always disable debugging at the end of troubleshooting session.

In order to disable all debugging, run these commands

For the use cases and processes, not implemented for radioactive tracing, you can get debug level traces. To set debug level on specific process, use the command

To verify trace levels of the various modules, run the command

To view the traces collected, run the command

When a packet first enters 9800 WLC, some processing occurs at data plane to identify if traffic is control plane or data plane. Packet-Trace feature provides a detailed view of this Cisco IOS® XE processing done at dataplane and the decision made on whether to punt, forward, drop or consume the packet. This feature on WLC 9800 works exactly same as the implementation on ASR!k.

For wireless workflows like AP join, client connectivity, and so on, tracing the uplink bidirectionally

Caution: The dataplane packet-tracer only parses outer CAPWAP header. So, conditions like wireless client mac do not yield useful output.

Step 3. To view the currently enabled conditions, run the command

Step 4. Enable packet-tracer for a finite number of packets. This packet number is defined as a power of 2 in the range of 16 - 8192. By default, both the summary and feature data are captured. Optionally, you can choose to only get a summary view by using summary-only sub-option. You have also have sub-options available to get fia trace, defining packet size in bytes, trace punt, inject or drop packets. and so on.

Step 5. (Optionally) You can copy and dump the packets as they are traced

Step 6. In order to view if the packet-trace is collecting nay output, verify statistics

Step 7. In order to view the output of the packet-trace, run the command

Step 8. (Optional) You can export packet dump for offline analysis by Cisco TAC

Embedded Packet capture (EPC) is a packet capturing facility that allows view into packets destined to, sourced from and passing through the Catalyst 9800 WLCs. These captures can be exported for offline analysis using Wireshark. For more details on the feature, refer EPC Configuration Guide

Compared to AireOS, instead fo relying on packet capturing and traffic mirroring capabilities on uplink switch, 9800 WLC allows for pcap capture on the box itself. On 9800, this capture can be setup both from Command Line Interface (CLI) as well as on the Graphical User Interface (GUI).

To configure via GUI, navigate to Troubleshooting > Packet Capture > +Add

Step 1. Define name of the packet capture. Maximum of 8 characters is allowed.

Step 2. Define filters, if any

Step 3. Check the box to Monitor Control Traffic if you want to see traffic punted to system CPU and injected back into the data plane

Step 4. Define buffer size. A maximum of 100 MB is allowed

Step 6. Choose the interface from list of interfaces in the left column and selecting the arrow to move it to the right column

Step 7. Save and Apply to Device

Step 9. You can let the capture run to the defined limit. To manually stop the capture, select Stop.

Step 10. Once stopped, an Export button becomes available to click with the option to download capture file (.pcap) on local desktop via https or TFTP server or FTP server or local system harddisk or flash.

Note: CLI provides a little more granularity of options such as Limit by. GUI is sufficient to capture packets for common use cases.

To configure via CLI:

Associate a filter. The filter can be specified inline, or an ACL or class-map can be referenced.

In this example it’s the ACL to match the traffic between the 2 ip addresses of the 9800 and another WLC 5520. Typical scenario for mobility troubleshooting:

If you want the capture to run in a circular buffer, it gives some time to notice the problem and then stop the capture and save it.

If you set it to 50MB buffer for example. It takes maximum 50MB of disk on the 9800 and its pretty large to capture several minutes of data in the hope that you get the occurrence of the problem.

Start the capture. You can to it from GUI or CLI:

The capture is now active.

Allow it to collect the necessary data.

Stop the capture. You can do it via GUI or CLI:

You can retrieve the capture from the GUI > Troubleshooting > Packet Capture > Export.

Or upload to a server from CLI. Example via ftp:

Once the necessary data has been collected, remove the capture: