This article explains how to perform a packet capture of network traffic using a Cisco Business Wireless Access Point (WAP), and stream it directly to Wireshark.

Configuration changes, monitoring, and troubleshooting are something a network administrator has to deal with often. Having a simple tool to use is invaluable! The goal of this article is to get more comfortable with the basics of packet captures as well as how to stream the packets to Wireshark. If you are not familiar with this process, let us answer some questions you might have already.

First things first, Wireshark is a free packet analyzer for anyone looking to troubleshoot their network. Wireshark provides many options for the capture as well as sorting traffic by several different parameters. Head to Wireshark for details on this open-source option.

What is a packet capture?

A packet capture, also known as a PCAP file, is a tool that can be helpful in troubleshooting. It can record every packet sent between devices in your network, in real time. Capturing packets allows you to dig into the details of the network traffic, which can include everything from device discovery, protocol conversations, and failed authentication. You can see the path of specific traffic flow and every interaction between devices on selected networks. These packets can be saved for further analysis as needed. It’s like an x-ray of the network’s inner workings via the transfer of packets.

What types of packets can be captured?

The WAP device can capture the following types of packets:

• 802.3 packets received and transmitted on the Ethernet interface.

What are the ways a packet capture can be done on a WAP?

There are two methods of packet capture available:

If you prefer to view an article that uses the older GUI for the local capture method, check out Configure Packet Capture to Optimize Performance on a Wireless Access Point.

The focus of this article is to Stream to a Remote Host, so if that is your preference, read on!

Where can I stream the packet?

The wireless packet capture feature enables capturing and storing the packets received and transmitted by the WAP device. The captured packets can then be analyzed by a network protocol analyzer for troubleshooting or performance optimization. There are many third-party packet analyzer applications available online. In this article, we focus on Wireshark.

Some models of Cisco Business WAPs have the ability to send packets in real time to CloudShark, a web-based packet decoder and analyzer site. It is similar to the Wireshark User Interface (UI) for packet analysis that includes many added options with a subscription. You can choose Stream to CloudShark to select the remote capture method. For more information, click on the following links:

Go to Downloads on your computer and select the Wireshark file to install its application.

In your web browser, enter the IP address of the WAP. Enter your credentials. If this is your first time accessing this device or you did a factory reset, the default username and password is cisco. If you need instructions on how to log in, you may follow the steps in the Access the Web-based Utility of the Wireless Access Point (WAP) article. 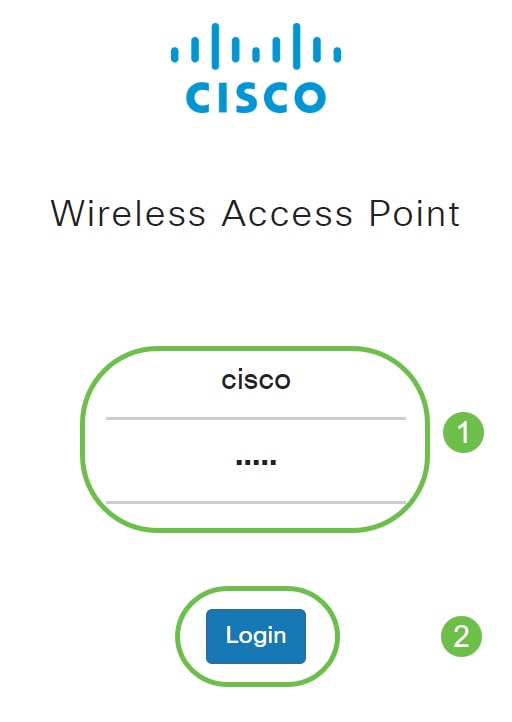 The Remote Packet Capture feature enables you to specify a remote port as the destination port for packet captures. This feature works in conjunction with the Wireshark network analyzer tool for Windows. A packet capture server runs on the WAP device and sends the captured packets through a Transmission Control Protocol (TCP) connection to the Wireshark tool.

While the remote packet capture is not supported by Linux, the Wireshark tool works under Linux and already created capture files can be viewed.

When the remote capture mode is in use, the WAP device does not store any captured data locally in its file system.

Stream a Capture Straight to Wireshark

To initiate a remote capture on a WAP device using the Stream to a Remote Host option, follow the steps listed below.

On the WAP, navigate to Troubleshoot > Packet Capture.

For the Packet Capture Method:

• All Wireless Traffic – Capture all wireless packets in the air.

• Traffic to/from this AP – Capture the packet sent from the AP or the AP received.

• Ignore Beacons – Enable or disable the capturing of 802.11 beacons detected or transmitted by the radio. Beacon frames are broadcast frames that carry information regarding a network. The purpose of a beacon is to advertise an existing wireless network.

• Filter on Client – Once enabled, specify the MAC address for WLAN Client filter. Note that the Client filter is active only when a capture is performed on an 802.11 interface.

• Filter on SSID - This option will be greyed out for this Stream to a Remote Host option. 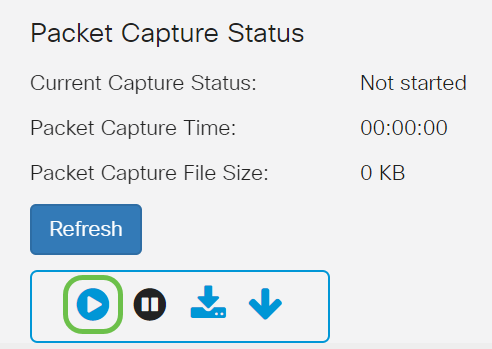 A confirm pop-up window will open. Click on Yes to start the capture.

Click on the Refresh button to check the current status. 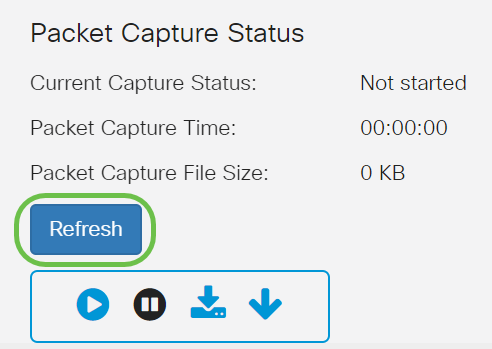 You can now the see the Current Capture Status will be Stream to a Remote Host. 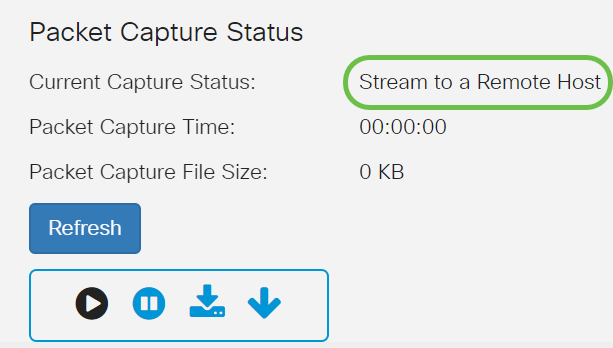 Since Wireshark has already been downloaded, it can be accessed by typing Wireshark in the search bar of Microsoft Windows and selecting the application when it is an option. 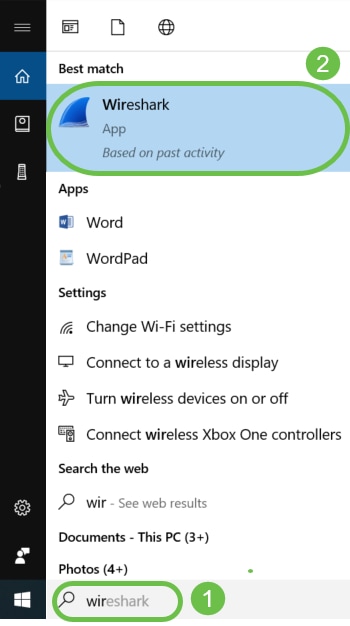 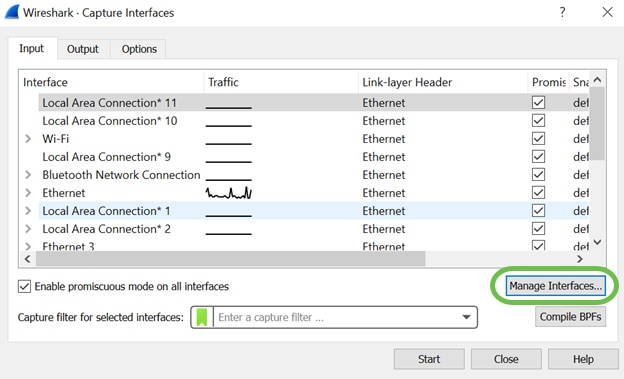 On the new Manage Interfaces pop-up window, navigate to Remote Interfaces and click on the plus icon to add the interface. 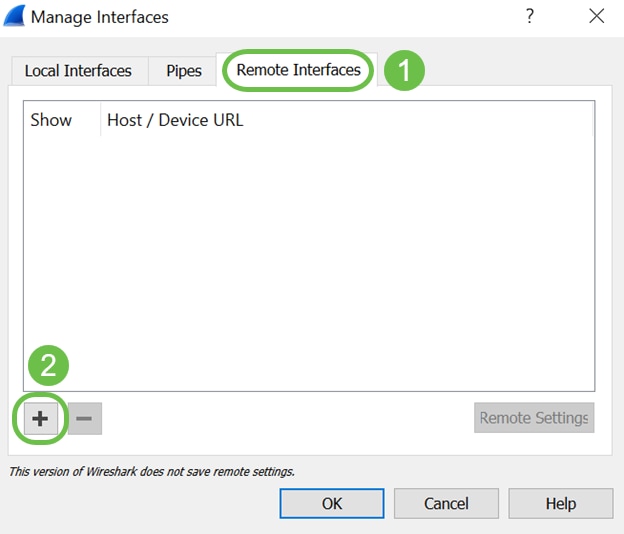 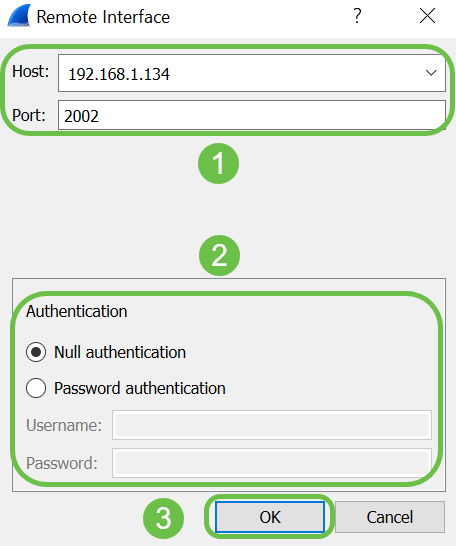 Under the Remote Interfaces tab, you will be able to see all the interfaces of the remote WAP device. You may want to only de-select some of these to reduce the volume of packets captured. You would leave the radio interfaces selected if you want to see beacon packets. Click OK. 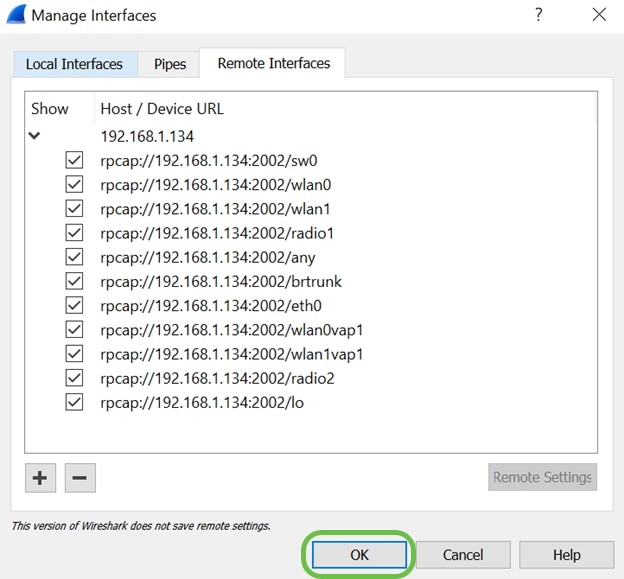 Now newly added interfaces will reflect on the Wireshark – Capture Interfaces window. Select the interface you want to monitor and click Start to view the packets. 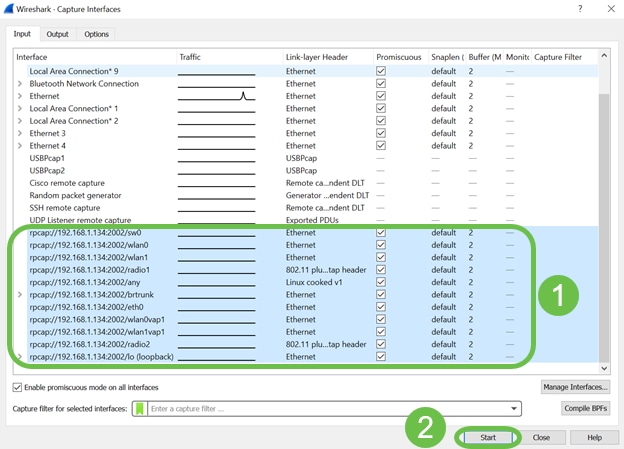 If you encounter issues when you attempt to view the packets, this means that the Remote Packet Capture Protocol service is not working on your system. The Remote Packet Capture Protocol service must first be running on the target platform before Wireshark can connect to it. For more information, click the link Remote Capture Interfaces through Wireshark.

On the WAP, click on the Stop Capture icon to stop the capture process. 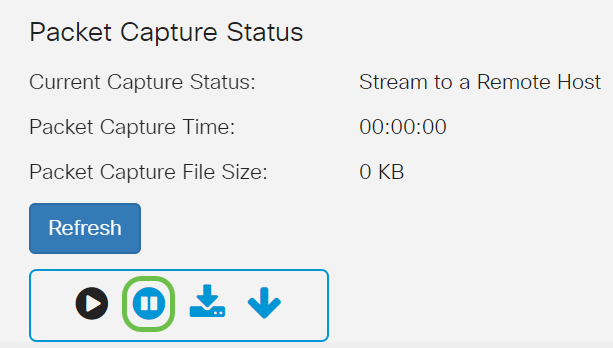 An Alert pop-up window will appear. Click OK to stop the remote capture.

You may also stop the packet capture by clicking on the Stop button in Wireshark application.

Now the Current Capture Status will be showing as Stopped due to administrative action, and Packet Capture Time will be reflecting to show the total capture duration.

The Packet Capture File Size will show as 0 KB. In addition, file download options will not work in this scenario.

On Wireshark you can view your packet capture. 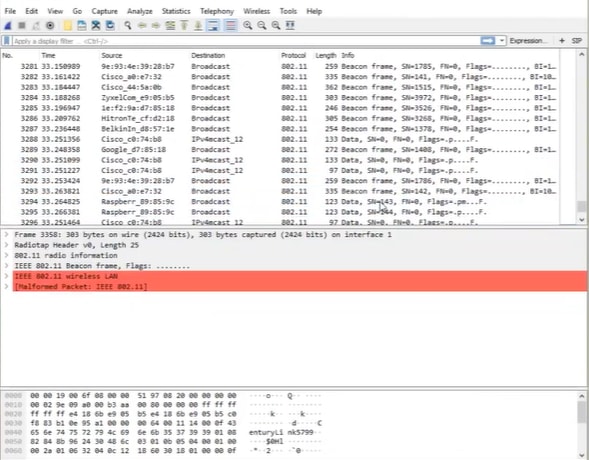 You now have the skills to get a packet streamed directly to Wireshark and you can get to work analyzing it. Not sure where to go from here? There are plenty of videos and articles available online to explore. What you search for depends on the needs of your situation. You’ve got this!