A Wireless Access Point (WAP) is a networking device that allows wireless-capable devices to connect to a wired network. Instead of using wires and cables to connect every computer or device in the network, installing WAPs is a more convenient, more secure, and cost-efficient alternative.

Setting up a wireless network provides a lot of advantages and benefits for you and your small business.

It is easier to set up compared to setting up a wired network.

There are different purposes of setting up a wireless network using a WAP. With a WAP, you can do the following:

Create a wireless network within your existing wired network.

This article aims to show you the different types of wireless network setups and their uses.

Set up a Wireless Network using a WAP

Listed below are different types of wireless network setup. Click on any one of the links depending on your network preference:

1. Adding a wireless network to an existing wired network

Adding a WAP in the existing network is like joining two networks together to form a single network for both wired and wireless devices such as shown in the diagram below. 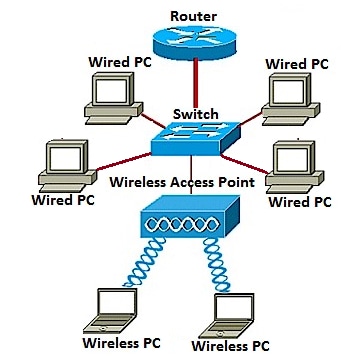 To learn how to add a wireless network to an existing wired network, click here.

WDS lets you connect multiple access points together. WDS allows the connected access points to communicate with each other via wireless connection. This feature enables clients who roam to have a seamless experience. This makes it easier to manage multiple wireless networks as well as reduces the amount of cables required to connect the networks.

The WAP can act as a single point-to-point mode access point, point-to-multipoint bridge, or as a repeater. On a repeater mode, a WAP can establish a connection between other access points that are far apart. It will simply act as a wireless extender. Wireless clients can connect to this repeater. A WDS role system can be compared similar to the role of the repeater. 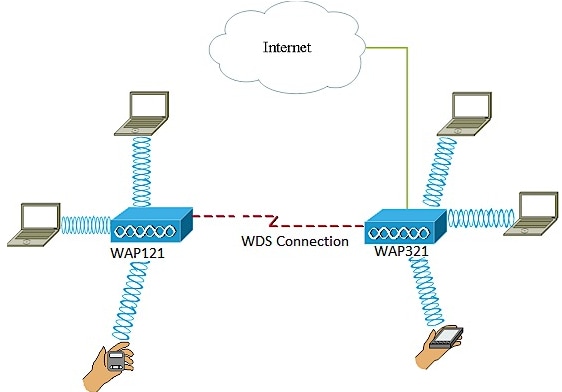 In the example diagram above, a WDS connection is configured between the WAP121 and the WAP321 Access Points.

1. WDS works only with specific pairs of Cisco WAP devices. The pairs are as listed below.

2. You can have only one WDS link between any pair of these devices. That is, a remote Media Access Control (MAC) address may appear only once on the WDS page for a particular WAP.

3. The devices should have the same settings for radio, IEEE 802.11 mode, Channel Bandwidth, and Channel.

4. Channel selection should be specified and not set to Auto.

To learn how to configure WDS on your WAP, click any of the links below depending on the device you are using: 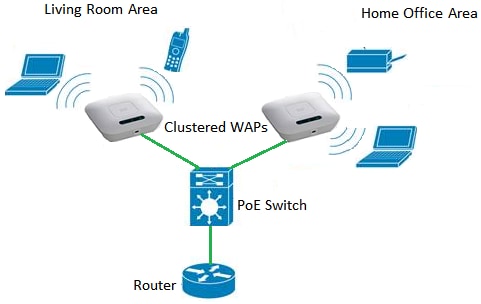 The WAP acts as a transmitter and receiver of Wireless Local Area Network (WLAN) radio signals, providing a larger wireless range as well as the ability to support more clients on a network.

Guidelines in configuring a cluster through Single Point Setup:

To learn how to configure clustering of WAPs, click here. 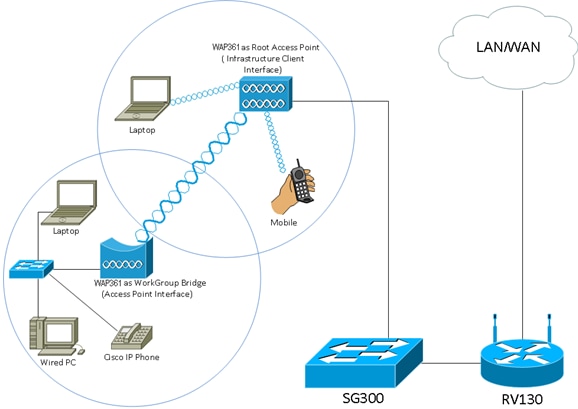 The topology above illustrates a sample WorkGroup Bridge model. Wired devices are tethered to a switch, which connects to the LAN interface of the WAP. The WAP acts as an access point interface, connects to the infrastructure interface.

To learn how to configure Workgroup Bridge mode, click here.