This article covers the fourth stage of the Firepower data path troubleshooting, the Access Control Policy (ACP). This information is applicable to all of the currently supported Firepower platforms and versions.

Generally speaking, determining which ACP rule a flow is matching should be pretty straight-forward. The Connection Events can be reviewed to see which rule/action is being enforced. If that does not clearly show what the ACP is doing with the traffic, debugging can be performed on the Firepower Command Line Interface (CLI).

After getting an idea of the ingress and egress interface the traffic should be matching as well as the flow information, the first step to identifying whether Firepower is blocking the flow would be to check the Connection Events for the traffic in question. These can be viewed in the Firepower Management Center under Analysis > Connections > Events.

Note: Prior to checking Connection Events, ensure that logging is enabled in your ACP rules. Logging is configured in the "Logging" tab within each Access Control Policy rule as well as the Security Intelligence tab. Make sure the suspect rules are configured to send the logs to the "Event Viewer". This also applies to the default action.

By clicking on "Edit Search" and filtered by a unique source (Initiator) IP you can see the flows which were being detected by Firepower. The Action column shows "Allow" for this host's traffic.

If Firepower is intentionally blocking traffic, the Action would contain the word "Block". Clicking on "Table View of Connection Events" provides more data. The following fields in the Connection Events can be reviewed if the action is "Block":

In order to quickly mitigate an issue which is believed to be caused by the ACP rules, the following can be performed:

Note: These quick mitigations require policy changes which may not be possible in all environments. It is recommended to first try to use system support trace to determine which rule the traffic is matching before making policy changes.

Further troubleshooting can be performed against the ACP operations via the > system support firewall-engine-debug CLI utility.

Note: On the Firepower 9300 and 4100 platforms, the shell in question can be accessed via the following commands:

The system support firewall-engine-debug utility has an entry for each packet being evaluated by the ACP. It shows the rule evaluation process taking place, along with why a rule is matched or not matched.

Note: In version 6.2 and above, the system support trace tool can be run. It uses the same parameters but includes more details. Be sure to enter 'y' when prompted with "Enable firewall-engine-debug too?".

In the example below, the establishment of an SSH session is evaluated using system support firewall-engine-debug.

This is the ACP which is running on the Firepower device.

The ACP has three rules.

The expectation is that the session matches AC rule 3 "trust server backup". The question is, how many packets should it take for this session to match this rule. Is all of the information needed in the first packet to determine the AC rule or multiple packets are required, and if that is so, how many?

On the Firepower CLI, the following is entered to see what the ACP rule evaluation process.

Tip: It is best to fill out as many parameters as possible when running firewall-engine-debug, so that only the interesting debug messages are printed to screen.

In the debug output below, you see the first four packets of the session being evaluated.

This is a chart further illustrating the debug logic.

For this flow, it takes 4 packets for the device to match the rule.

This is a detailed explanation of the debug output.

In summary, the connection takes 4 packets to match the session because it has to wait for the firewall to identify the application since rule 2 has an application constraint in it.

If rule 2 had only had source networks and it was not XFF, then this would have taken 1 packet to match the session.

You should always place layers 1-4 rules above all other rules in the policy when possible as these rules typically require 1 packet to make a decision. However, you may also notice that even with just layers 1-4 rules it may more than just 1 packet to match an AC rule, and the reason for this is URL/DNS security intelligence. If you have either of these enable, the firewall has to determine the application for all sessions being evaluated by the AC policy because it has to determine if they are HTTP or DNS. Then, it must determine if it should allow the session based on the blacklists.

Below is a truncated output of the firewall-engine-debug command, which has the relevant fields highlighted in red. Note the command used to obtain the name of the application which is identified.

In some scenarios, traffic can be blocked despite matching a Trust rule in the ACP. The example below evaluates traffic with the same Access Control Policy and hosts.

As seen above, the firewall-engine-debug output shows that the traffic matches a "Trust", whereas the Connection Events show action of Block due to an Intrusion Policy rule (determined because the Reason column shows Intrusion Block).

The reason this can occur is due to the Intrusion Policy used before Access Control rule is determined Setting in the Advanced tab on the ACP. Before the traffic could be Trusted per the rule action, the Intrusion Policy in question identifies a pattern match and drops the traffic. However, the ACP rule evaluation results in a match of the Trust rule, since the IP addresses did match the criteria of the "trust server backup" rule.

In this scenario, users report that cnn.com is being blocked. However, there is no specific rule which blocks CNN. The Connection Events, in conjunction with firewall-engine-debug output, shows the reason for the block.

With this information in mind, firewall-engine-debug is run. In the debug output, the traffic is blocked based on the application tag.

Even though there isn't a rule which explicitly blocked http://cnn.com, the displays ads tagged is being blocked within the Applications tab of an ACP rule. 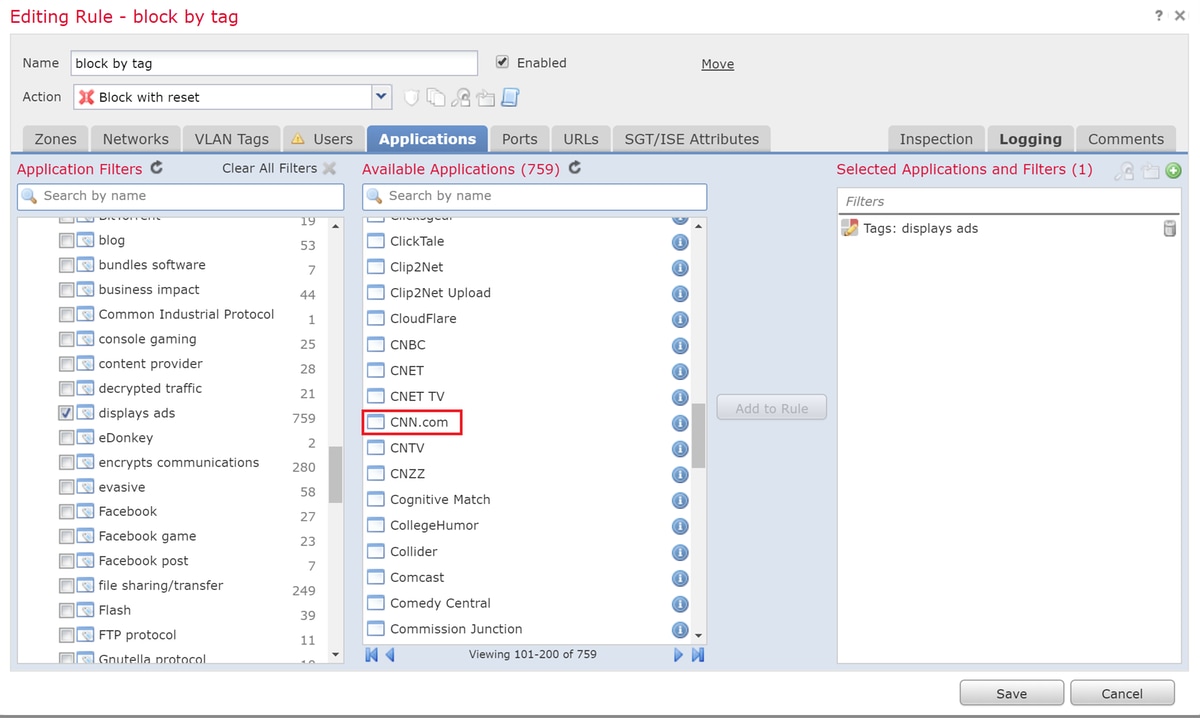 Caution: If the ACP contains an SSL Policy, remove the SSL Policy from the ACP before exporting to avoid disclosing sensitive PKI information