Deploy ASA in Transparent Mode Within a FP9300

This document describes how to deploy an ASA Transparent in a FP9300. By default when an ASA is deployed within a FP9300 the Firewall mode is Router, there is no option to select Transparent mode as we have it for the FTD template.

A transparent firewall, on the other hand, is a Layer 2 firewall that acts like a “bump in the wire”, or a “stealth firewall”, and is not seen as a router hop to connected devices. However, like any other firewall, access control between interfaces is controlled, and all of the usual firewall checks are in place.

When Deploying an ASA there is no option to select the Firewall mode as it is when deploying FTD: 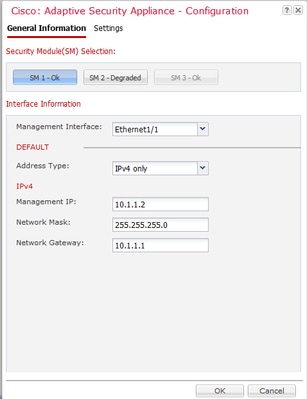 Once the ASA has been deployed, it is preconfigured in routed mode:

As there is no option to configure the Firewall mode from the Chassis Manager, it needs to be done from the ASA CLI:

On the Chassis Manager, it can be validated that the management port configuration was also removed:

After a couple of minutes, the device is restarted:

Once the ASA is back online, it can be confirmed that the device is in transparent mode and with a Management IP address with this command from CLI:

The feature to have the ability to select a firewall mode while an ASA is deployed from the Chassis Manager has been requested through the defects CSCvc13164 and CSCvd91791.