This document describes the "overrun" error counter and how to investigate performance issues or packet loss problems on the network. An administrator might notice errors reported in the show interface command output on the Adaptive Security Appliance (ASA).

The ASA interface error counter "overrun" tracks the number of times that a packet was received on the network interface, but there was no available space in the interface FIFO queue to store the packet. Thus, the packet was dropped. The value of this counter can be seen with the show interface command.

Example output that displays the problem:

In the example above, 2881 overruns were observed on the interface since the ASA booted up or since the command clear interface was entered in order to clear the counters manually.

Interface overrun errors are usually caused by a combination of these factors:

Steps to Troubleshoot the Cause of Interface Overruns

The steps to troubleshoot and address this problem are:

The ASA platform processes all packets in software and uses the main CPU cores that handle all system functions (such as syslogs, Adaptive Security Device Manager connectivity, and Application Inspection) in order to process incoming packets. If a software process holds the CPU for longer than it should, the ASA records this as a CPU hog event since the process "hogged" the CPU. The CPU hog threshold is set in milliseconds, and is different for each hardware appliance model. The threshold is based on how long it could take to fill the interface FIFO queue given the CPU power of the hardware platform and the potential traffic rates the device can handle.

CPU hogs sometimes cause interface overrun errors on single-core ASAs, such as the 5505, 5510, 5520, 5540, and 5550. The long hogs, that last for 100 milliseconds or more, can especially cause overruns to occur for relatively low traffic levels and non-bursty traffic rates. The problem does not impact multi-core systems as much, since other cores can pull packets off of a Rx ring if one of the CPU cores is hogged by a process.

A hog that lasts more than the device threshold causes a syslog to be generated with id 711004, as shown here:

CPU hog events are also recorded by the system. The output of the show proc cpu-hog command displays these fields:

If overrun errors continually increase on an interface, check the output of the show proc cpu-hog command in order to see if CPU hog events correlate with an increase in the interface overrun counter. If you find that the CPU hogs contribute to the interface overruns errors, it is best to search for bugs with the Bug Toolkit, or raise a case with the Cisco TAC. The output of the show tech-support command also includes the show proc cpu-hog command output.

Dependent upon on the traffic profile, the traffic that flows through the ASA might be too much for it to handle and overruns might occur.

The traffic profile consists of (among other aspects):

These ASA features can be used in order to identify the traffic profile on the ASA:

A burst of packets that arrive on the NIC could cause the FIFO to become filled before the CPU can pull the packets off of it. There usually is not much that can be done in order to solve this problem, but it can be mitigated by the use of QoS in the network to smooth out the traffic bursts, or flow control on the ASA and the adjacent switchports.

Flow control is a feature that allows the ASA's interface to send a message to the adjacent device (a switchport for example) in order to instruct it to stop sending traffic for a short amount of time. It does this when the FIFO reaches a certain high water mark. Once the FIFO has been freed up some amount, the ASA NIC sends a resume frame, and the switchport continues to send traffic. This approach works well because the adjacent switchports usually have more buffer space and can do a better job buffering packets on transmit than the ASA does in the receive direction.

Refer to the flow control feature in the Cisco ASA 5500 Series Command Reference, 8.2 for more information. 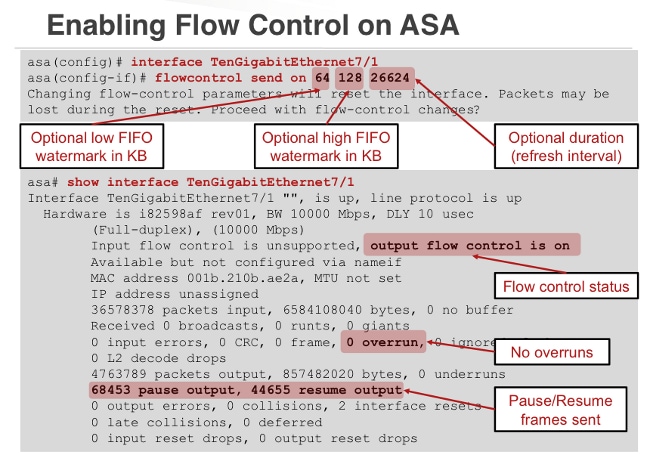