This document describes how to troubleshoot issues with Optimal Gateway Selection (OGS). OGS is a feature that can be used in order to determine which gateway has the lowest Round Trip Time (RTT) and connect to that gateway. One can use the OGS feature in order to minimize latency for Internet traffic without user intervention. With OGS, Cisco AnyConnect Secure Mobility Client (AnyConnect) identifies and selects which secure gateway is best for connection or reconnection. OGS begins upon first connection or upon a reconnection at least four hours after the previous disconnection. More information can be found in the Administrator's guide.

How does OGS work?

A simple Internet Control Message Protocol (ICMP) ping request does not work because many Cisco Adaptive Security Appliance (ASA) firewalls are configured to block ICMP packets in order to prevent discovery. Instead, the client sends three HTTP/443 requests to each headend that appears in a merge of all profiles. These HTTP probes are referred to as OGS pings in the logs, but, as explained earlier, they are not ICMP pings. In order to ensure that a (re)connection does not take too long, OGS selects the previous gateway by default if it does not receive any OGS ping results within seven seconds. (Look for OGS ping results in the log.)

Note: AnyConnect should send an HTTP request to 443, because the response itself is important, not a successful response. Unfortunately, the fix for proxy handling sends all requests as HTTPS. See Cisco bug ID CSCtg38672 - OGS should ping with HTTP requests.

Note: If there are no headends in the cache, AnyConnect first sends one HTTP request in order to determine if there is an authentication proxy, and if it can handle the request. It is only after this initial request that it begins the OGS pings in order to probe the server.

Once the calculation is finished, the results are stored in the preferences_global file. There have been issues with this data not being stored in the file before.

OGS caching works on a combination of the DNS domain and the individual DNS server IP addresses. It works as follows:

When Connectivity to the Gateway is Lost

When OGS is used, if connectivity to the gateway to which the users are connected is lost, then AnyConnect connects to the servers in the backup server listandnot to the next OGS host. The order of operations is as follows: 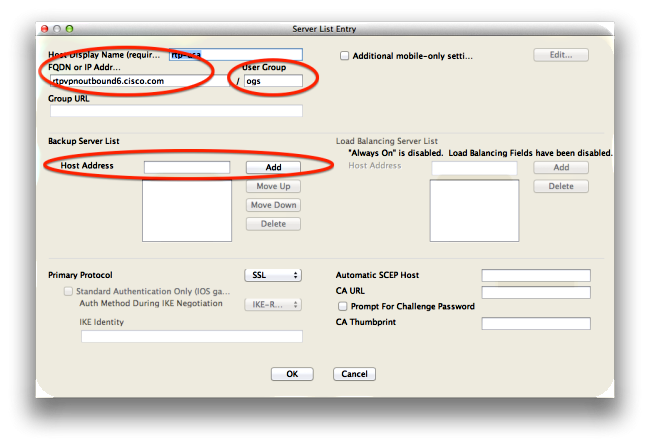 Cisco bug ID CSCud84778 has been filed in order to correct this, but the complete URL must be entered in the host address field for the backup server, and it should work: https://<ip-address>/usergroup.

Resume After a Suspend

In order for OGS to run after a resume, AnyConnect must have had a connection established when the machine was put to sleep. OGS after a resume is only performed after the network environment test occurs, which is meant to confirm that network connectivity is available. This test includes a DNS connectivity subtest.

However, if the DNS server drops type A requests with an IP address in the query field, as opposed to replying with "name not found" (the more common case, always encountered during tests), then Cisco bug ID CSCti20768 "DNS query of type A for IP address, should be PTR to avoid timeout" applies.

When ASA versions earlier than Version 9.1(3) are used, the captures on the client show a persistent delay in the SSL handshake. What is noticed is that the client sends its ClientHello, then the ASA sends its ServerHello. This is normally followed by a Certificate message (optional Certificate Request) and ServerHelloDone message. The anomaly is two-fold:

This happens because of the interaction between TCP slow-start  and TCP delayed-ACK. Prior to ASA Version 9.1(3), the ASA uses a slow-start window size of 1, whereas the Windows client uses a delayed-ACK value of 2. This means that the ASA only sends one data packet until it gets an ACK, but it also means that the client does not send an ACK until it receives two data packets. The ASA times out after 120ms and retransmits the ServerHello, after which the client ACKs the data and the connection continues. This behavior was changed by Cisco bug ID CSCug98113 so that the ASA uses a slow start window size of 2 by default instead of 1.

This can impact OGS calculation when:

The processing is identical when it resumes from a suspended or hibernated state, if the OGS and AnyConnect resume settings allow for it.

Step 1. Clear the OGS Cache in Order to Force a Reevaluation

In order to clear the OGS cache and reevaluate the RTT for available gateways, simply delete the Global AnyConnect Preferences file from the PC. The location of the file varies based on the Operating System (OS):

Step 2. Capture the Server Probes During the Connection Attempt

In order to verify why OGS selected a particular gateway, complete these steps:

Inspect the capture for the TCP/SSL probes used in order to calculate RTT. See how long the HTTPS request takes over a single TCP connection. Each probe request should use a different TCP connection. In order to do this, open the capture in Wireshark, and repeat these steps for each of the servers:

If after the analysis of the captures the determined RTT values are calculated and compared to the values seen in the DART logs and everything is found to match up, but it still seems like the wrong gateway is being selected, then it is due to one of two problems:

Q: Does OGS work with load-balancing?

A: Yes. OGS is only aware of the cluster master name, and uses that in order to judge the nearest headend.

Q: Does OGS work with the proxy settings defined in the browser?

A: OGS does not support auto proxy or proxy Auto Config (PAC) files, but does support a hard-coded proxy server. As such, OGS operation does not occur. The relevant log message is: "OGS will not be performed because automatic proxy detection is configured."