Why do we need to tune?

Every time a file is created, moved, copied, or executed on a Mac endpoint an event for that file is sent from the operating system to the AMP Mac Connector. The event results in that file being analyzed by the connector. The analysis process generally involves hashing the file in question and running it through different analysis engines both on the computer and in the cloud. It is important to recognize that this act of hashing does consume CPU cycles.

The more file operations and executes that occur on a given endpoint, the more CPU cycles and I/O resources the Connector will require for hashing. There are several features that have been added to the Connector to reduce the overhead. For instance, if a file being created, moved, or copied has been previously analyzed, the Connector will use a cached result. However, in the case of some events such as executes where security is paramount, all events are always fully analyzed by the Connector. This means applications or processes that propagate multiple repetitive executions of child processes - especially over a short period of time - can cause performance issues. Finding and excluding applications that repetitively execute child processes at a rate greater that once per second can significantly reduce your CPU usage and increase battery life on laptops.

File operations such as creates and moves generally have less impact than executes, but excessive file writes and temporary file creation can result in similar problems. An application that writes to a log file frequently, or one that generates multiple temporary files can cause AMP to consume a lot of CPU cycles with unnecessary analysis and can create a lot of noise for the AMP backend. Distinguishing noisy parts of legitimate applications is a very important step in maintaining a productive and safe endpoint.

The purpose of this document is to help distinguish the file operations (create, move, and copy) and executes that will have a negative effect on the daemon's performance and waste CPU cycles. Identifying these file and directory paths will allow you to create and maintain the appropriate exclusion sets for your organization.

You can add pre-created exclusion lists to your policies that are are maintained by Cisco to provide better compatibility between the AMP for Endpoints Connector and antivirus, security, or other software. These lists are available on the Exclusions page in the console as Cisco-Maintained Exclusions.

There are three kinds of exclusion tuning options available:

Pre-Install Tuning is the most basic form of tuning and is done primarily through the command line in a Terminal session.

For newer mac from OS X El Capitan you will need to first boot to recover mode (command-r) while booting and disable the protection for dtrace:

To inspect which file executions are most prevalent run the following:

This will generally show which applications are being run over and over again. Many provisioning applications will run scripts or execute binaries in short intervals to maintain company software policies. Any applications seen being executed at a rate greater than once a second, or executed multiple times in short bursts, should be considered a good candidate for exclusion.

To inspect which file operations are most prevalent, run the following command:

You will immediately see which files are being written to most. Often this will be log files being written to by running applications, backup software copying files, or email applications writing temporary files. In addition to this, a good rule of thumb is that anything with a log or journal file extension should be considered a suitable exclusion candidate.

The Connector’s daemon needs to be put into Debug Logging mode before beginning support file tuning. This is done via the AMP for Endpoints console, through the Connector’s policy settings at Management -> Policies. Select the policy, Edit the policy, and go to the Administrative Features section under the Advanced Settings sidebar. Change the Connector Log Level setting to Debug. 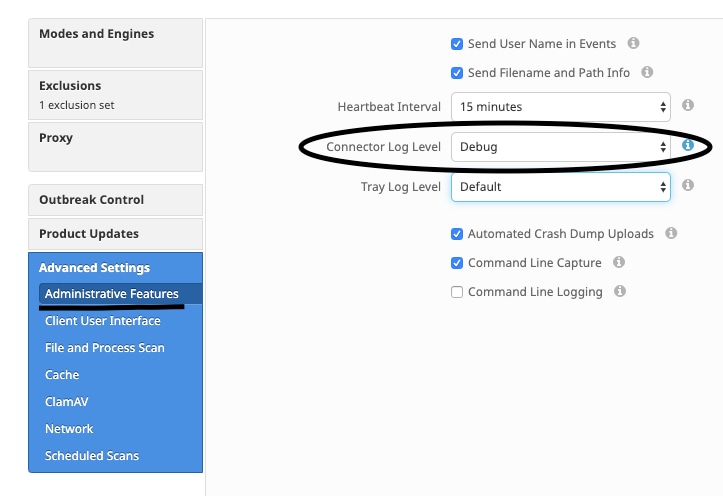 NOTE: When your tuning is complete, don’t forget to change the Connector Log Level setting back to Default so that the Connector runs in its most efficient and effective mode.

This method involves using the Support Tool, an application installed with the AMP Mac Connector. It can be accessed from the Applications folder by double-clicking on /Applications->Cisco AMP->Support Tool.app. This will generate a full support package containing additional diagnostic files.

An alternative, and quicker, method is to run the following command line from a Terminal session:

This will result in a much smaller support file containing only the relevant tuning files.

Leave the Connector running in Debug mode for a 15-20 minute period, and then run the Support Tool. A good rule of thumb is that any files or paths that average 1000 hits or more during that time are good candidates to be excluded.

One way to get started with Path Exclusion rules is finding the most frequently scanned file and folder paths from fileops.txt and then consider creating exclusion rules for those paths. Once the policy has been downloaded, monitor the new CPU usage. It might take 5 to 10 minutes after the policy is updated before you notice the CPU usage drop as it might take time for the daemon to catch up. If you are still seeing issues, run the tool again to see which new paths you observe.

A good tuning pattern is first identifying the processes with a high volume of executes from execs.txt, find the path to the executable, and create an exclusion for this path. However, there are some processes that should not be included, this includes: