This document describes the process in order to see the trace between Voice Operarting System (VOS) node and Phone/Gateway/3rd Party Server.

When you troubleshoot in Cisco Unified Communications Manager (CUCM), Cisco Unified Contact Center Express (UCCX), Cisco Unity Connection (CUC) or Instant Message and Presence (IM&P), it is sometimes necessary to collect packets for intermittent issues which are being sent to and from the network interface on a VOS server. The commands and screenshots are shown for CUCM version 11.X, the same can be applied for CUC, UCCX and IM&P (from 11.X and above).

The information in this document is based on Call Manager 11.X.

Step 1. Connect to the CUCM Host.

With the use of an Secure Shell (SSH) client like Putty/SecureCRT connect to the CUCM node as shown in the image.

Now, after admin prompt, you can start to prepare a capture network utility in order to capture packets as shown in the image.

Step 3. For a usual capture, one might want to collect ALL packets of ALL sizes from and to ALL address into a capture file called PC.cap. In order to do this, simply run utils network capture eth0 file packets count 100000 size all on the admin CLI and as shown in the image.

Now, what if you want to capture packets more than 100000 or for intermittent issues, so this Enhancement method is used to collect captures on CUCM interface.

You can use this method in order to add the rotating file parameters:

Note: If host is provided, do not provide src or dest.

When LWM is hit, capture fails as shown in the image. 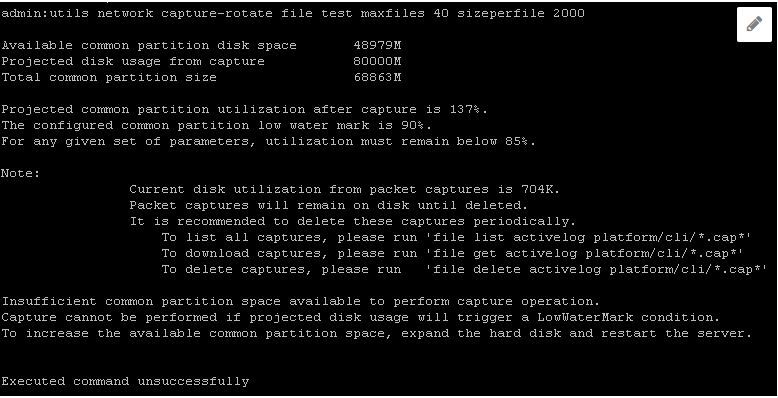 If Database is down and query fails for LWM, the error published is as shown in the image.

If query for LWM fails, enhanced capture commands fails with Database error. These command queries LWM configuration from the database and subtracts 5, so if database is down, it assumes LWM is 90% and print warning.

Note: In order to recover common partition space, it might be necessary to delete capture files.

Note: If CLI session is closed, while rotate command is active, Packet captures stop (and saved) at the moment when window is closed.

Packet captures remains on disk until deleted. It is recommended to delete these captures periodically.

How to download the Captures via SSH FTP (SFTP) Server is as shown in the image.