The information in this document is based on Unified CCX 10.6.X and later.

This is not related to the Outbound Dialer feature in Unified CCX. This is a custom script by which the callback can be placed to the customer on the specified callback number.

Note: This custom script example is just for reference. It is a proof of concept from a lab environment. Custom scripts are not supported by the Cisco Technical Assistance Center (TAC).

In order to complete the configuration, create two scripts.

This is the logic and other details:

Since the message has been recorded, a call is played to another trigger which is associated with an Application/script (script 2) which just has Accept > Select Resource.

Once an agent accepts the call there, the system plays a prompt (Play Prompt in Script 1) to that agent. This agent is usually part of another set of agents who are available to take these calls.

This is an example of how the script looks: 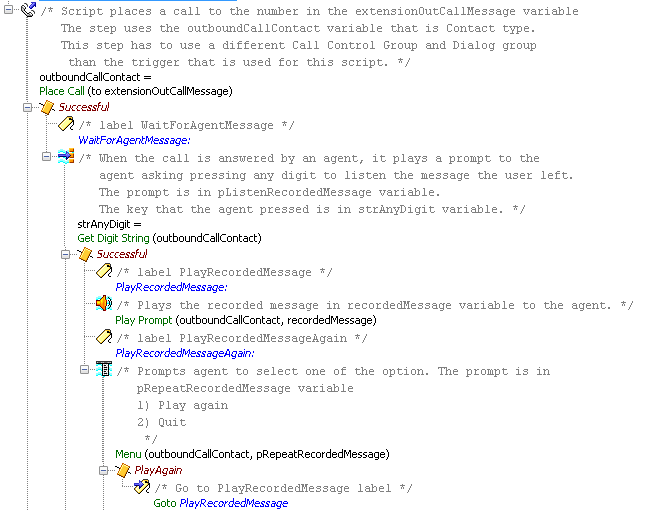 Note: When PlaceCall is used, a new call is generated and this is saved into a Contact variable called outboundCallContact. In the Play Prompt step, you need to select this contact instead of the Triggering Contact since the Triggering Contact has already dropped off (the caller who called in). You play the prompt to the agent and this is for the new call/contact which was created through the PlaceCall step.

When the caller choses the callback option, this is the logic used:

Collect and Confirm the Callback Number 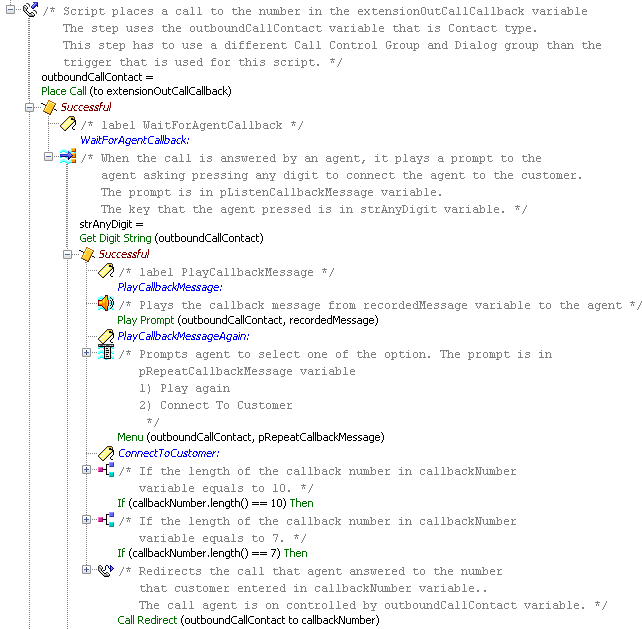 Note: When PlaceCall is used, a new call is generated and this is saved into a Contact variable called outboundCallContact. In the redirect step, you need to select this contact instead of the Triggering Contact. This is because you need to redirect the call which is connected to the agent and this is the new call/contact which is created with the Place Call step. The Triggering Contact is not there anymore, since this call from the caller has already dropped.

It is a simple script with Accept and Select Resource.