There are two Trustsec Models Available : 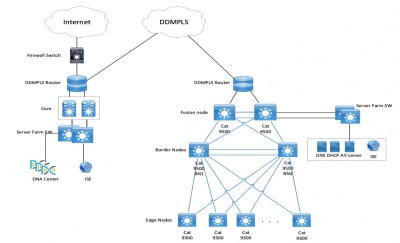 These are the steps to enable Allow-List Model (Default Deny IP):

Note: This can be done with the use of a range template in DNAC for simplicity. Otherwise, for every switch, it is required to be done manually during provisioning. The below snippet shows how to do it via a DNAC template.

For more information on DNAC templates, refer to this URL for the document.

The idea is for Local IP-SGT mapping is to be available on the switches even if all ISE goes down. This  ensures Underlay is up and connectivity to the critical resources are intact

The first step is to Bind critical services to an SGT (ex - Basic_Network_Services/1000). Some of these services include:

An SGT mapping is of no use until a relevant SGACL is created using the SGT and hence our next step would be to create an SGACL that acts as a local Fallback in case ISE nodes go down (when ISE services are down, SXP tunnel goes down and hence SGACLs and IP SGT mapping is not downloaded dynamically).

This configuration is pushed to all Edge and border nodes.

Above SGACL Ensure communication within Fabric switches and underlay IP’s

Above SGACL Ensure communication from  switches and Access points to ISE, DNAC, WLC and Monitoring Tools

Above SGACL Ensure communication from  Access points to ISE, DNAC, WLC and Monitoring Tools to switches

The requirement is to deny most traffic on the network and permit a lesser extent. Then fewer policies are needed if you use default deny with explicit permit rules.

Navigate to Work Centres > Trustsec > TrustSec Policy > Matrix > Default and change it to Deny All in final catch rule. 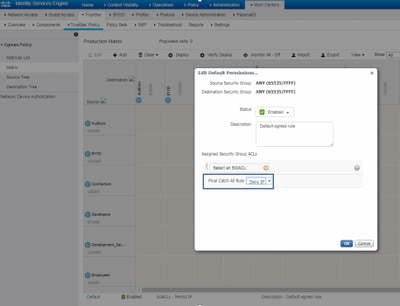 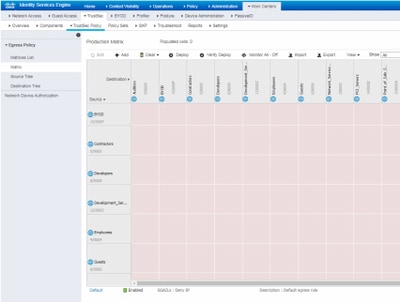 Note: This image represents (All Columns are in Red by default), Default Deny has been enabled and only selective traffic can be allowed after SGACL creation.

In SDA Environment, New SGT should only be created from DNAC GUI as there are numerous cases of database corruption due to the mismatch of the SGT database in ISE/DNAC.

In order to Create SGT, log in to DNAC > Policy > Group-Based Access Control > Scalable Groups > Add Groups, a Page Redirects you to ISE Scalable Group, click Add, enter the SGT name and Save it. 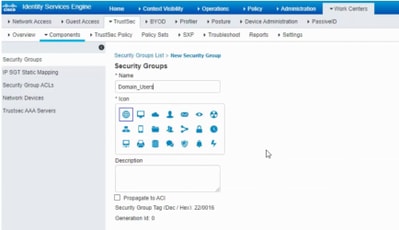 The same SGT reflects in DNAC through PxGrid integration. This is the same procedure for all future SGT creation.

In SDA Environment, New SGT should only be created from the DNAC GUI. 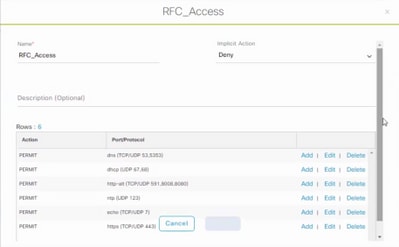 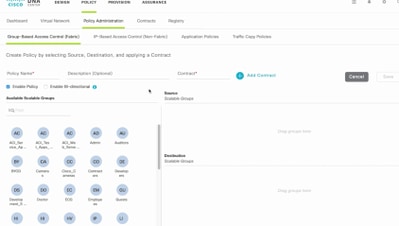 Once SGACL/Contract is configured from DNAC, it automatically reflects in ISE. below is an exapmle of one way matrx view for a sgt.

SGACL Matrix, as shown in below image, is an example view for Allow-list (Default Deny) model. 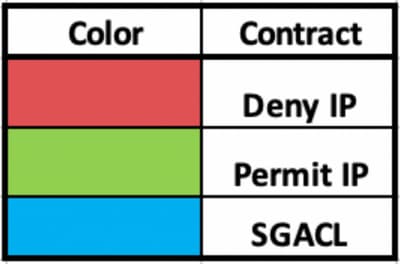 In order to verify the switches SGT received by ISE, run this command: show cts environmental-data

In order to verify enforcement on the uplink interface, run these commands: 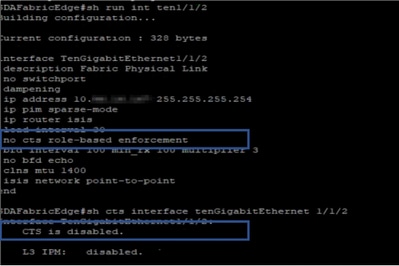 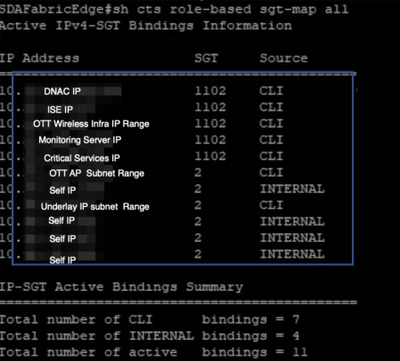 Note: SGACL pushed by ISE has a priority over local SGACL.

SGACL for Endpoint Connected to Fabric 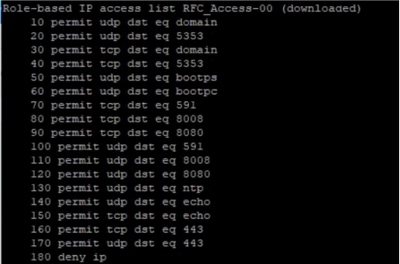 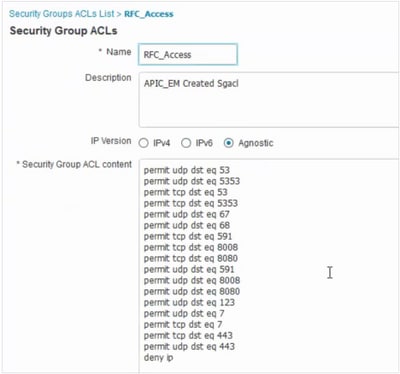 Issue 1. In Case Both the ISE Nodes are Down.

In case both the ISE nodes are down, IP-to-SGT mapping received by ISE is removed and all the DGT's are tagged as unknown, and all the user sessions that exist stops after 5-6 minutes.

Note: This issue is applicable only when sgt (xxxx)  ->  unknown (0) SGACL access is limited to DHCP, DNS, and web proxy port.

Now if both the ise nodes go down, SGACL sgt-->unknown hits, and the session that exists are intact.

Extension to IP conversion happened on SIP and actual voice communication happen over RTP between IP to IP. CUCM and Voice Gateway were added to DGT_Voice.

DNAC provisions switch with critical VLAN for Data and as per the configuration, all new connections during ISE outage get Critical VLAN and SGT 3999. The Default Deny in trustsec policy restricts the new connection to access any network resources.

These commands are added to the configuration section.

Note: All the commands can be combined into a single template and can be pushed during provisioning.

Observations: Authentication counters increasing when servers are DEAD. Clients try to authenticate with PSN  when servers were marked DEAD.

Ideally, there shouldn’t be any auth request from an endpoint if ISE PSN nodes are down.

Push this command in under radius server with DNAC:

With this command in the switch, it sends periodic test authentication messages to the RADIUS server. It looks for a RADIUS response from the server. A success message is not necessary - a failed authentication suffices because it shows that the server is alive.