This paper provides an overview of the Cisco® Session Border Controller (SBC) implementation in a distributed deployment model on the Cisco ASR 1000 Series Aggregation Services Routers. It also briefly explains what the SBC is, its different deployment models, and how the SBC helps with multimedia applications. It explains the features available on the Cisco ASR 1000 Series Router that facilitate its functioning as a data border element (DBE) in the SBC distributed deployment model. This paper assumes that you have a basic understanding of voice technologies and the need for a SBC.

SBC functions are becoming very popular in the voice-over-IP (VoIP) industry; they are the key components used for interconnecting enterprise and service provider VoIP and multimedia networks.
Because the SBC meets the growing need for secure, IP-centric interconnections between enterprise and service provider networks, a critical need for intelligent border element functions has grown. With the SBC, you can make voice or video calls without worrying about protocols, network reachability, or security of your network. Such elements provide physical and logical ingress and egress demarcations, signaling and media control, consolidated security, and management features. The SBC is in a sense a toolkit of functions such as Signaling Interworking, network hiding, security, quality of service (QoS), and much more.
The SBC facilitates simple and cost-effective connectivity between independent networks. It provides direct IP signaling and media interconnections, thereby lowering cost and performance latencies and improving media quality for multimedia sessions. Additionally, it offers greater flexibility in migrating from traditional time-division multiplexing (TDM) to unified communications services.

When a voice call connects from one service provider to another service provider, usually TDM interconnects are used. With the emergence of VoIP technologies, service providers started using IP connectivity to connect to other networks so that calls originating from an IP phone could stay on the packet network from end to end. Service providers then found new challenges in passing VoIP calls to other service providers.
Because VoIP subscribers can have unique environments with respect to protocols, IP addresses, codecs, the way they carry dual tone multifrequency (DTMF) traffic, etc., interconnecting two network domains can be very difficult. In addition, each provider wants to protect its own network from other providers' networks. Furthermore, service providers face other concerns with regard to call detail records (CDRs), billing records, quality of voice calls, troubleshooting, and feature interactions - all of which make end-to-end VoIP performance extremely challenging.

Role of SBC in VoIP Interconnect

VoIP, video streaming, instant messaging, multimedia conferencing, and interactive gaming are just some of the real-time, IP-based applications enjoying rapid growth in today's competitive communications market. Service providers are now finding it efficient and economical to directly interconnect their real-time VoIP and multimedia networks to their subscribers as well as to other service provider networks. This trend has created a requirement for SBCs to help service providers control and manage real-time multimedia communications sessions at the borders between their IP networks. In addition, SBCs are also useful for the following requirements:

• Using the SBC to provide interworking of protocols between H.323 and SIP, or between SIP and SIP (because of the rapidly changing standards and implementation of SIP)

The SBC plays an important role in many different deployment scenarios. Figure 1 shows some network topologies in which an SBC is used.

In the unified SBC model, the SBE and DBE logical elements are generally within a single, physical SBC device. As shown in Figure 2, SBE and DBE are combined in a single network element and the SBC resides at the edge of the domain.

In this model signaling and media both pass through the same physical device.

Many carriers are finding that as their voice networks grow, the challenges of managing the networks grow proportionately. Service providers today want the option to decouple the SBC data-path functions from signaling functions. They want to be able to distribute DBE functions in the network separately from the SBE functions, which can be centralized to simplify management, operations, and troubleshooting. Generally in this model the SBE functions are concentrated in central locations and the DBE functions are distributed with the network routing functions.
Figure 3 shows that in the distributed deployment model communication between the SBE and DBE takes place over a well-defined standard, such as ITU-T H.248 adopted in IP Multimedia Subsystem (IMS), which allows a multiplatform implementation of the SBE and DBE elements in the network. The distributed approach to SBC aligns with the directional approach of IMS, ITU, and Telecoms and Internet Converged Services and Protocols for Advanced Networks (TISPAN) architectures, where a variety of different elements and applications in the network can provide the SBE function. In TISPAN terminology the Cisco ASR 1000 Series Router DBE function provides the Border Gateway Function (BGF) and interacts with the Service Policy Decision Function (SPDF). SPDF uses the H.248 protocol to set up and tear down media paths (gates) on the router and apply per-session policies.
In the distributed deployment model, the bearer traffic or media packets always flow through the DBE, and the SBE participates only in the signaling flow. The DBE handles the media-related functions such as Deep Packet Inspection (Real-Time Transport Protocol [RTP] and Real-Time Streaming Protocol [RTCP]), and modification of packet headers, Media Relay to handle NAT traversals, Topology Hiding, etc. 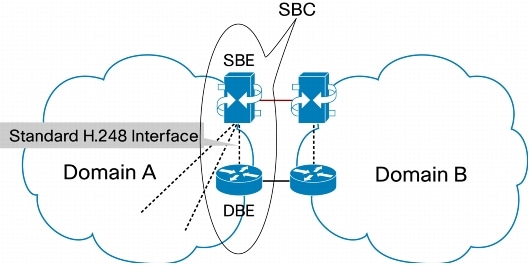 A flexible network component with an integrated SBC supports both the unified and the distributed deployment models. Networks continually grow and evolve, and a multimedia IP transport network that scales adequately today with a unified SBC will likely outgrow the unified model and necessitate a distributed approach. Operators want a SBC that can grow with their networks - they do not want to make capital-intensive complete equipment upgrades of in-service network elements.
Table 1 gives the main differences between unified and distributed SBC models. 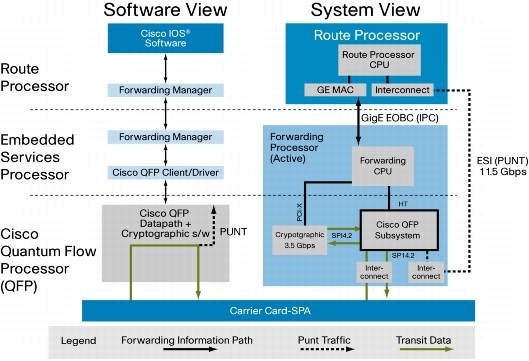 Figure 5 illustrates the signaling flow in the distributed SBC model. 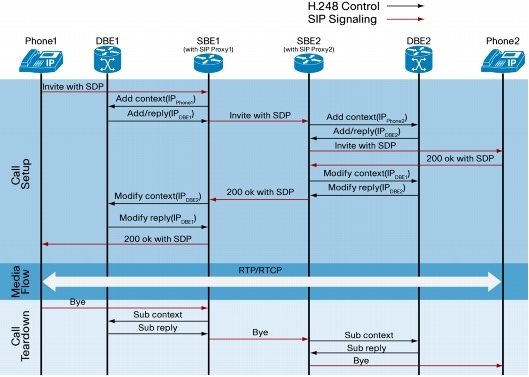 The figure shows that the SIP invite message is sent from the end device (phone1) to SBE1 directly. Based on that SIP message, SBE1 instructs DBE through H.248 to open a media pinhole using H.248 commands. On receiving a reply from DBE, SBE1 sends a SIP invite message toward the other SBE for the terminating side. That SBE also opens a media pinhole on its side of the SBE using an H.248 interface. On receiving a reply from DBE2, SBE2 sends an invite message to the end user (phone2). When SBE2 gets a 200 ok SIP message from the end user, it asks the DBE to configure the stream in SendReceive mode using the modify context command of H.248 and forwards that 200 ok message toward the originating-side SBE. The originating SBE also modifies the media stream to send a receive message in DBE using a modify H.248 command and then forwards the 200 ok message to the originating user (phone1); then the media traffic can start. In this way media is established. Similarly, the BYE message is sent from one of the end users and SBE instructs the respective DBEs to subtract the connection; in this way the call gets cleared.
Even though DBE handles only media packets, the signaling packets also pass through the DBE. On instructions from SBE, DBE can create signaling pinholes that can be used for traversing signaling packets. The signaling pinholes are created like media pinholes, and you can enforce different policies on them. Signaling pinholes support can help in protecting the SBE infrastructure from the end users who are using NAT traversal packages.

As discussed before, the SBC is a toolkit of functions that helps particular functions meet different design criteria and needs. The distributed SBC DBE implementation covers various functions such as Signaling Interworking or Control Path Management, Topology Hiding, billing and CDR, QoS, etc. In the distributed deployment model, the many DBE functions are controlled by the SBE with the H.248 signaling control. The following DBE features are supported on the Cisco ASR 1000 Series Routers:

• Signaling Interworking or Control Path Management: For signaling, DBE opens signaling pinholes and forwards the traffic to SBE; for the control path, DBE interacts with SBE and opens media pinholes and executes policies defined by SBE through the H.248 interface.

• Topology Hiding: The DBE protects the signaling infrastructure and media packets by NAT and PAT. It supports no-, single- and twice-NAT and -PAT traversal schemes.

• Security: The different H.248 packages such as gate management and traffic management provide infrastructure security and bandwidth protection. With these packages, the DBE can enforce different policies such as checking the originating addresses of allowed traffic and allowed bandwidth. It can also watch for denial-of-service (DoS) attacks by monitoring incoming packet addresses and dropping suspicious source packets. The SBE is alerted when these types of events occur.

• Media management: The Cisco ASR 1000 DBE implementation supports RTP and RTCP for media packets. The DBE checks for the media supported by five addresses (source IP address, source port address, distribution IP address, distribution port address, and the IP address). The DBE implementation is independent of codec type, so all codecs are supported. The DBE can also detect and insert DTMF digits in the media stream with the help of H.248 packages. It can also detect any hung calls using the inactivity timer.

• The distributed SBC model with the DBE function integrated with the router has fewer hops compared to the appliance model, resulting in lower latency for the packets. Lower latency is important for real-time traffic applications such as VoIP and video.

The SBC is becoming an increasingly important component of VoIP networks. It provides important features such as Signaling Interworking, Topology Hiding, QoS, security, etc. The Cisco ASR 1000 Series Router can act as a DBE in the distributed SBC deployment model; this design also meets the IMS and TISPAN terminology. The Cisco ASR 1000 Series Router with an integrated DBE function can reduce CapEx and OpEx for enterprises and service providers.
The distributed architecture of the Cisco ASR 1000 with a high-capacity data forwarding engine provides a more scalable implementation of the DBE portion of the SBC. Because this function runs on Cisco IOS Software, you can use features of the software also with the SBC. In addition, it provides higher redundancy of routing and embedded services processors so that service providers can give nonstop service to their users.